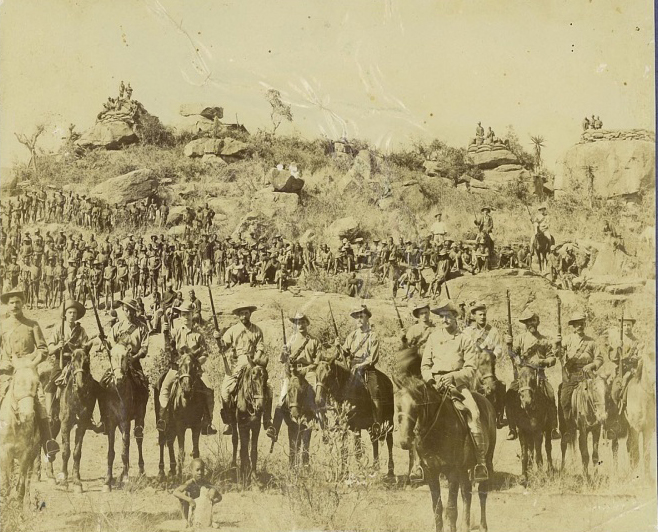 THEY could not take the land, so they decided, ‘we will kill all of you’.

“The Chimurenga war was the bloodiest, ‘the most violent, sustained and highly organised instance of resistance to colonial rule anywhere in Africa…A genuine people’s war in which individuals fought because they chose to, not because  they were ordered by their leaders. The European casualties were much higher than in any comparable revolt.” (Muchemwa:2015)

In Matabeleland, Sir Frederick Carrington, the one commanding the imperial forces, was defeated by First Chimurenga/Umvukelawarriors in the Matobo Battle of July 20-27 July 1896 forcing Rhodes to call for indabas.

The invaders totally failed to defeat the Matabele in the battlefield.

In the land of the Shona, Chimurenga/Umvukela warriors, commanded by their gallant heroic chiefs, could not be defeated.

They fought many a battle which left the whiteman confounded and convinced this was not the land they could ever take.

The Catholics, Rhodes and Sir Carrington called for genocide and as we mentioned last week,this genocide was to be effected by using instruments of mass destruction such as the Mountain gun, the 7 Pounder, the Maxim gun and dynamite to destroy the fortresses and defence positions of the Chimurenga/Umvukela warriors.

The scorched earth policy was the other instrument of annihilation as crops were destroyed in the fields, while granaries as well as livestock were looted.

When you have to resort to genocide, you have failed. This is what the British armed robbers did-they had failed.

In Matabeleland, in early July 1896, they assembled a formidable arsenal of 7 pounders, Mountain guns, Maxim guns, as well as dynamite and on the night of July 4, assaulted Ntabazikamambo, ‘a huge mass of kopjes and hills full of caves and shelters capable of containing  thousands of people and animals’.

This is where most of the Ndebele spiritual and military leaders were hiding.

The British meant no-one to survive.

True to unparalleled Ndebele warrior mettle, their intelligence had foreseen the genocidal intent of the whiteman, therefore hundreds of Chimurenga/Umvukela warriors had retreated from the fortress earlier that night.

Among them were Mkwati, the chief medium of Mwari and his wife Tengela, Siginyamatshe, as well as regimental commanders Mpotswana and his Nyamandlovu regiment, Mtini and his Ngnoba regiment, Nkomo and his Jingeni forces, as well as members of the royal family such as Nyamanda.

Ten invaders were killed in the raid.

First Chimurenga/Umvukela warriors had already defeated the whiteman at the battle of Umguza River Valley which raged from April 16 to 25 1896 after which 2000 Chimurenga/Umvukelawarriors, armed to the teeth, surrounded Bulawayo to deliver an unmistakable message to the armed robbers from the British Isles: ‘Game over, Mr White’

After this battle, the whiteman knew he could not defeat the Matabele and so genocide was his solution.

There are memories of sobbing shadows in the land,  mourning in the land of their fathers, shadows that will not be consoled.

After the storming of Ntabazikamambo, Sir Carrington was stopped dead in his tracks at the battle of Matobo in July 1896 when Matabele warriors demonstrated what they had already done at Umguza River.

Rhodes had no choice but to call for talks.

When you have to execute all the leadership, there is no greater admission of failure than that.

The people are so fearless they have fought you without relenting, their gallantry strikes fear in the depths of your soul, and in your cowardly greed you decide that the best thing is for you to wipe out the people.

All the pretence at being human vanishes like the morning mist, the beastliness of a dog-eat-dog philosophy rears its ugly head, the emblem of the armed robber.

It was a war of attrition to wrest from others what is rightfully theirs, a grand theft of titanic proportions.

When people kill it is not correct except in self-defence.

When people kill out of greed, it is anathema.

Paramount, Chiefs Makoni, Mutekedza, Mashayamombe, Mashonganyika as well as many others were executed in cold blood.

These callous executions were, to the whiteman, the permanent seal to defeat the undefeated.

First you destroy thousands of their people taking refuge in the fortresses, burn their villages, destroy all crops in the fields, loot all their grain and livestock so that there is no blade of grass to survive on, and when the chiefs surrender to save their people from further genocidal torment, you execute them.

Indeed Rhodes had instructed, ‘spare no-one even if he threw down his arms and begged for mercy.

Who will console the sobbing shadows in the land?

Who will tell them how it can ever be just for them to be so inhumanly tormented for no crime except to own the most beautiful rich land in the world, the most gracious gift anyone could have?

Who will convince them that greed and lust for what belongs to others were the crimes against humanity. This kind of senseless cruelty is hitlerite.

It was the harshest sentence to a people who had committed no crime except to successfully defend, with their everything, their sacred gift from Musikavanhu, their land, Zimbabwe.

No one cared, they did their worst on a people who were carrying on with their lives as Musikavanhu decreed.

When they would have killed all the people but for Musikavanhu’s intervention, it was to seal the fate of the princes and princesses of this land in dust bins. When they executed the chief mediums of Mwari, they lied to themselves that our destiny was now in their hands, until Mbuya Nehanda’s bones ‘rose’, then they still resorted to genocide, but Musikavanhu had spoken: ‘The whites were a menace to be driven out, they could not be ensconced in this sacred land’.