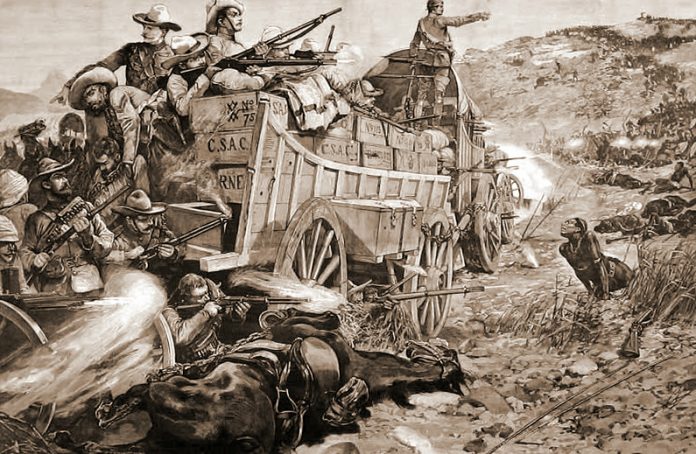 WHAT does it mean when a people come to your land and say ‘I covet all you have but if you won’t let me have it I will kill all of you and what is yours shall be mine eternally?’

In an intelligence report to the BSA Police, on February 15 1897, Father Biehler, a Catholic Priest at Chishawasha Mission, wrote:

“Our mode of fighting is not the proper one for Mashonas… It seems to me the only way of doing anything at all with these natives is to starve them, destroy their lands, and kill all that can be killed.”

Rhodes himself instructed genocide: “You should kill all you can. Do not spare anyone even if he threw down his arms and implores for mercy.”

Rhodes’ biographers record ‘the blood lust that seized him as he moved in with the column from Salisbury, how he would return to the scene of action to count African corpses.’

And Sir Frederick Carrington who had been humiliated by the Ndebele in Matobo would at a public dinner advocate for the extermination or deportation of the entire Ndebele Race.

To advocate the annihilation of an entire race because you lust for what is theirs is utmost inhumanity.

There are memories of sobbing shadows in the land, shadows that cannot be still, that cannot rest.

The British agreed with Toynbee, that the owners of the land were vermin to be exterminated.

‘There is no other alternative if niggers have no souls’, they concurred.

The unfolding holocaust that occurred during the First Chimurenga after the whites realised they could not defeat the Shona reveals the lowest depths to which whites sunk in a bid to exterminate a people whose land, mineral wealth and cattle they coveted.

They would have this land of untold beauty and riches at any cost.

Thus was fashioned a military strategy to shock and paralyse the Shona with the worst cruelty imaginable.

The scotched-earth policy was one such diabolic strategy, involving slashing and burning of crops in the fields, burning down villages, looting grain and livestock including chickens, so that Africans would have no shelter or food.

No thought was given to women and children.

There would have been babies in their mothers’ wombs, suckling babies and toddlers, the sick, the elderly … what unimaginable agony they went through.

And the criminals who committed such atrocities have the temerity to want to teach us human rights.

Hundreds of wagons were sent to collect thousands of tonnes of looted grain from African villages.

Animals, including cattle, goats, sheep and chickens were all rounded up and looted.

Yet today we still have those who will work with the white-man for a few British pennies, hired mercenaries to restore British harshness and cruelty on our people. These sell-outs are not the centre of our discussion today but it is unconscionable to work for the armed robbers who unleashed and would still unleash such untold suffering on our people.

Thousands of refugees ended up in the open, in the mountains, hills and kopjes.

The insatiable greed of the white-man from the British Isles reduced people of the land to roving bands of destitutes in their land, the land of Chaminuka, the land of Nehanda, the land of Lobengula.

Chimurenga warriors had fought valiantly, heroically, they would not be vanquished so the white-man decided on genocide.

Starving the people of the land to death so that they would surrender was only one of the genocidal strategies.

The other major strategy was mass killings using weapons of mass destruction such as the Seven-pounder mountain gun and dynamite.

As Muchemwa (2015) reveals: “The mass casualty effects of dynamite explosions often accounted for thousands of Africans dead per fortress.”

The white-man had no compunction about killing thousands of Africans for no other reason except that he coveted the land, wealth and beauty of his land.

Today, he would preach to us about human rights.

He would say he came to civilise and bring God to the barbaric godless African.

What is more barbaric and godless than to kill mercilessly because you lust for what is not yours?

Having failed to dislodge Paramount Chief Makoni on two previous assaults on his Gwindingwi Fortress, a renewed assault on the fortress lasted eight days from August 25 to September 2 1896, they pounded it continuously for the entire period.

Thousands of innocent civilians were killed.

This is the same story on many other Fortresses throughout Mashonaland.

It was a holocaust.

The combination of mass deaths due to starvation criminally induced by the armed invaders from Britain, and the massacres from dynamite explosions, accounts for up to 50 000 (Muchemwa: 2015).

To lose 50 000 of your people because a foreign race covets what is yours is unconscionable.

Can anyone kill so many people for no reason except covetousness and do nothing by way of recompense?

The perpetrators know not what it means to be human, the spirit of the land cannot be still, cannot rest.