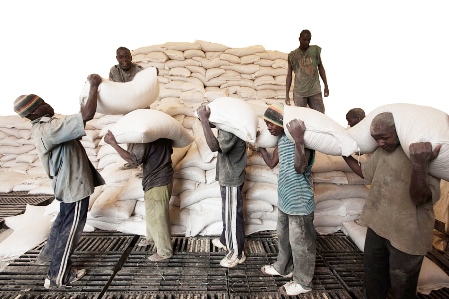 FIVE months into the marketing season of maize, Government has stepped in to quell the price disputes between farmers and buyers that were threatening the success of the season.
Like the past marketing seasons, the first four months were characterised by price disputes with farmers not happy with prices offered by private buyers taking advantage of the failure by the Grain Marketing Board (GMB) to pay farmers in time.
Last week Statutory Instrument (SI) 122 of 2014 was gazetted that regulates the minimum mandatory grain producer prices with April 1 the effective date.
The SI indicates that Government announces the minimum producer prices of grain including maize and wheat at the beginning of marketing seasons.
Government announced at the commencement of the maize marketing season that the producer price was US$390 per tonne.
Following the putting in place of the Instrument it is now against the law to buy maize for less than US$390 per tonne.
Private buyers had before the SI, been offering prices as low as US$180 per tonne.
The SI has been met with mixed feelings in the agriculture sector.
The question, however, is was the SI the solution to the problem or will it create a whole new set of problems.
Farmers have welcomed the move while private buyers have said they will suspend the buying of grain till Government reviews the SI.
Zimbabwe Commercial Farmers Union president Wonder Chabikwa said farmers applauded Government for putting in place measures to protect farmers.
“Farmers were happy as this is what as unions we have been lobbying for on behalf of our members,” Chabikwa said.
“Well before the start of the season, we met with millers, gave them figures showing the average costs of production indicating that for a farmer to break even, a tonne should sell at US$400.
“In the past, buyers took advantage of the absence of a legal framework paying as little as US$100 per tonne and this is a clear indication that they are not worried about the welfare of farmers.”
Chabikwa said it was now up to Government to avail funds to the GMB to ensure it pays farmers upon delivery.
The improved maize price has spurred deliveries of maize to GMB by 231 percent when compared with the quantities delivered during the same period last year.
Since the start of the marketing season, GMB has paid only for the first 5 000 tonnes delivered to its depots and in previous seasons farmers were at loggerheads with the entity for failure to pay for maize delivered.
Agriculture, Mechanisation and Irrigation Development Deputy Minister, Paddy Zhanda was recently quoted in some sections of the media highlighting that Government had not fully resourced GMB.
“If farmers are to gain back trust in GMB, it is important that Government avails funds so that farmers are paid so that farmers do not end up without anywhere to sell their produce,” said Chabikwa.
“Once farmers deliver the maize to GMB we might end up with a situation whereby millers will end up buying directly from GMB.”
A Mazowe farmer, Elliot Lumbe concurred with Chabikwa that the SI was a welcome move that would promote growth of the indigenous farmers.
“Zimbabwe’s economy is agro-based and farming should be taken as a business where the farmer is protected to ensure they can continue to produce,” he said.
“The people with money in this case buyers were taking advantage of the farmer.
“We had a situation where the buyer was determining the price yet it is the farmer who knows their cost of production and should have been left to determine the price of their products.”
Lumbe acknowledged that Government was heavily burdened and could not subsidise farmers.
Zimbabwe has the highest producer price of US$390 in the Southern Africa region with the average price ranging from US$200 to US$220.
Most farmers in the region are subsidised by their Government with others using GMO seed that produce a much higher yield per hectare compared to traditional seeds used locally.
The inability by GMB to pay farmers on time has however remained a worrying issue with market watchers arguing that if the entity continues to pay farmers late, they would be left stuck with grain as millers have suspended buying.
Millers have indicated that the floor price of importing a tonne of maize from neighbouring countries was less than buying locally.
Like other products on the market, calls have been made to allow market forces to determine the prices of maize rather than having a flat price guiding the different stages of the season.
In January, private buyers were buying a tonne of maize at prices ranging from US$400 to US$450, but as the harvesting started and the volumes of grain increased on the market, prices began to fall.
South Africa’s maize price hit record highs of more than US$320 a tonne earlier this year, but retreated following the flooding of the crop on the market.
With Government having added its voice on the price disputes, it is hoped measures will be put in place to resuscitate GMB, making it a viable entity fit to compete with other players.