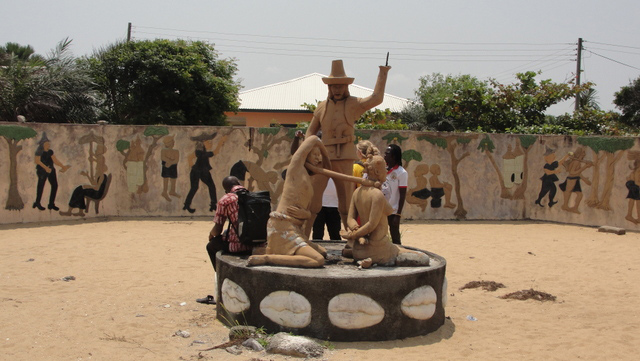 THERE are hundreds of monuments from the period of slavery all over the world and each of them tellingly presents the atrocities of slave trade either subversively or restrictively, depending on who is telling the story.

Madge Dresser’s (2007) ‘Set in Stone? Statues and Slavery in London’ argues that monuments sum up the history of the slave-trade.

The word monument comes from the Latin ‘monumentum’, based on the word, ‘monere,’ meaning to warn or recall, which Dresser argues to have capacity ‘to stir emotions’.

The meaning of these monuments can be subverted and transformed according to context.

According to the magazine Leadership Friday, Badagry is a historic site in Nigeria which was a hub of activity during transatlantic slavery.

It was the exporting point in Nigeria for slaves being ferried to Brazil.

The lagoon of Badagry, called The Point of no Return, re-enacts the agony of transatlantic slavery for 400 years ago.

On the island of Badagry is a well called Attenuation Well.

At this spot, slaves were forced to drink to forget their misery and were briefed about the journey ahead.

As such Badagry monument bears the memories of suppression, subjugation and bullying that the Africans suffered due to enslavement.

The Badagry heritage museum was opened in 2002 and it occupies the historic building that was the first administrative office block in Nigeria.

Johanna C. Kardux (2004), in ‘Monuments of the Black Atlantic: Slavery Memorials in the United States and the Netherlands’, in Blackening Europe: the African American Presence cites the Cape Coast Castle Museum in Ghana as a partly gold trading hub and prison during slave trade.

Within Ghana is also as another monument from the period of slavery called Slave Memorial Atorkor.

Atorkor was part of what was formally known as the Upper Slave Coast.

Being located on the Atlantic Coast, it became a port for the shipment of captives procured from the interior.

Blacks in the diaspora funded the building of the monument in memory of this unfortunate trade (op cit.).

The memorial around the walls of Atorkor is a stark reminder of how the chiefs were tricked and bribed into allowing the Westerners to take slaves from their tribes.

Kardux argues that, because of its location on the Atlantic Coast, it became a port for the shipment of captives procured from the interior.

It is the same place ‘where slaves skilled in rice cultivation destined for North America were held.’

Today, the place is little more than abandoned ruins, crumbling stones clutched by ivy roots and overgrown weeds on a 500-metre strip of land in the muddy waters of the river but its presence speaks volumes to the tragedy that befell the continent.

Another monument is the Slave Market, Zanzibar (Tanzania), which is also dedicated to the memory of the inhuman treatment during slavery.

For ages, Zanzibar served as a transit port for African slaves enroute to Mauritania and the Arabic countries.

Elmina Castle, also erected by the Portuguese in 1482, was the first trading post built on the Gulf of Guinea, and the oldest European building in existence south of the Sahara.

First established as a trade settlement, the castle later became one of the most important stops on the route of the Atlantic slave trade.

Although concentration has been given to the northern countries, it is crucial to mention that the cultural museum in Cape Town housed as many as 1 000 slaves as pointed out by Alan Maycock (2007) in Reconciliation Triangle.

The place was converted to government offices in 1806 by the British and is currently part of Iziko Museums of Cape Town.

Kunta Kinte Alex Haley Memorial of Annapolis, Maryland (US), is also another place commemorating arrival of enslaved Africans. It has three sites in one and these are the Alex Haley Sculpture Group, Compass Rose, and Story Wall.

African American Slavery Monument of River Street, Savannah, Georgia (US), depicts a black family caught in a tight embrace with broken shackles at their feet.

Inscription by poet Maya Angelou juxtaposes the suffering and hope the slaves bore in a mixed bag:

“We were stolen, sold and bought together from the African continent. We got on the slave ships together. We lay back to belly in the holds of the slave ships in each other’s excrement and urine together, sometimes died together, and our lifeless bodies thrown overboard together. Today, we are standing up together, with faith and even some joy.”

This monument is characterised by silence in the face of the ills of slavery.

At the United Nations Headquarters, New York City, (US), The Ark of Return resembles a slaving vessel that transported African people as human commodities between continents.

Seymour Drescher (2001), ‘Commemorating Slavery and Abolition in the United States of America’, in Facing up to the Past: Perspectives on the Commemoration of Slavery from Africa, the Americas and Europe, points out the imperial aspect of British public monuments.

Most of the monuments put abroad exonerated the slave masters presenting a one-sided story.

For example, London statues, from 1700 to 1779, commemorate royals, including those slave merchants or professional men.

However, slave narratives are not a private space trotting on sanitised self-image.

The monuments ought to capture the natural history of a people.

British monuments, like church and school inscriptions, misrepresented slavery as evidenced by Sir John Cass’ Foundation Primary School in Aldgate in St Botolph’s Lane, where happy natives and other tropical exotica were reflected.

For instance, the figure of a kneeling male slave in Wedgwood’s abolitionist medallions endlessly replicates the evil of slave trade captured in abolitionist discourse.

The monumental representations showcase Africa and the ‘negro race’ while as passive objects of white benevolence: Africa is ‘delivered’ from Europe by an ‘honourable band’ (of Englishmen); human rights are ‘established…for the Negro race’ while the personhood of James Somerset is eclipsed by his racial identity.

The Buxton memorial, also designed by Samuel Sanders (1812–1873), was begun in 1865, two decades after Buxton’s death, and was funded by his son, Charles Buxton, the very year of American slave-emancipation.

The Abbey’s Canon Donaldson and Livingstone were honoured as significant monuments of slavery.

Sir Reginald Coupland, Wilberforce’s first proper biographer, writing to The Times, argues that monuments retained the sensibilities of the Africans, ‘now fellow-members with us of the Commonwealth.’

Another monument is the West Indies House, centre of Amsterdam (Netherlands).

It used to be the headquarters of the Dutch West-Indische Compagnie (West India Company or WIC), which was probably the largest single slave trader in history.

Even church material, like Newton’s pulpit, graves in the yard and inscriptions, capture slavery.

Wilberforce University, Ohio (US), a private, Liberal Art Historically Black University (HBCU), is also monumental in the sense that it celebrates the pioneers of anti-slavery.

It is situated 12km south of the capital Bujumbura, overlooking Lake Tanganyika.

It marks the location where explorer and missionary Dr David Livingstone as well as journalist and explorer Henry Morton Stanley visited and spent two nights on November 25-27 1871.

“You are now standing at the former slave market site. The world’s last open slave market and notorious place, where slaves from East and Central Africa regions were bought and sold.”

The monuments are forceful and intended messages, which always depend on the point of view of the narrator.

All in all, the monuments are a reminder of the painful history of Africa, which speaks from generation to generation against the self-congratulatory political agenda of the West against the African introspective narratives of slavery.