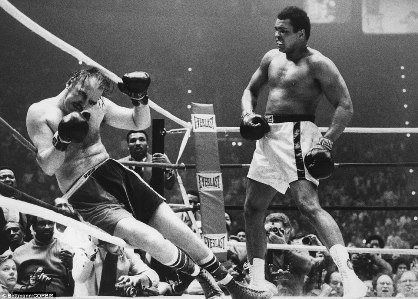 “It is in the light of my consciousness as a Muslim minister and my own personal convictions that I take my stand in rejecting the call to be inducted.
I do so with the full realisation of its implications.
I have searched my conscience
Why should they ask me to put on a uniform and go 10 000 miles from home and drop bombs and bullets on brown people in Vietnam while so-called Negro people in Louisville are treated like dogs and denied simple human rights?
No I’m not going 10 000 miles from home to help murder and burn another poor nation simply to continue the domination of white slave masters of the darker people the world over.
This is the day when such evils must come to an end.
I have been warned that to take such a stand would cost me millions of dollars. But I have said it once and I will say it again.
The real enemy of my people is here.
I will not disgrace my religion, my people or myself by becoming a tool to enslave those who are fighting for their own justice, freedom and equality.
If I thought the war was going to bring freedom and equality to 22 million of my people, they wouldn’t have to draft me, I’d join tomorrow.
I have nothing to lose by standing up for my beliefs.
So I’ll go to jail, so what?
We’ve been in jail for 400 years.”
These were Muhammad Ali’s words as he refused to fight in the Vietnam War in 1967.
His decision not only lost him millions of dollars, but made him an enemy of most Americans and the establishment, as well as being stripped of his world title.
And when they stripped him of the World Champion title, Ali had no kind words for the establishment.
“I had the world heavyweight title not because it was given to me, not because of my race or religion, but because I won it in the ring.
Those who want to take it and start a series of auction-type bouts not only do me a disservice, but actually disgrace themselves.
Sports fans and fair-minded people throughout America would never accept such a title-holder.”
Born Cassius Clay in 1942, the world was robbed of her ‘greatest’ son on June 4 2016, for the legend, the greatest, the lord of the boxing ring, the man who ‘flew like a butterfly and stung like a bee’, Muhammad Ali, passed on.
Others will choose to remember him for his sharp tongue, or as a ‘rebel’ who challenged the system in America and refused to join a war he did not believe in, yet to many black people, not only in the racially divided America of the 1960s, but world over, Ali became an icon and a symbol of hope as he challenged racial oppression and white supremacy.
Like Martin Luther King Junior and Malcom X, Ali was a civil rights champion.
Challenging racial oppression during the 1960s was dangerous.
Martin Luther King Junior and Malcom X were assassinated, yet Ali chose to continue challenging racial oppression rather than cringing and living in the comfort of his wealth.
The world is what it is today because of his courage.
Below are some of Ali’s famous quotes that I took from the USA Today.
l “I’m not the greatest, I’m the double greatest.”
l “I’ve wrestled with alligators. I’ve tussled with a whale. I done handcuffed lightning. And throw thunder in jail.”
l “It isn’t the mountains ahead to climb that wear you out; it’s the pebble in your shoe.”
l “If you even dream of beating me you’d better wake up and apologise.”
l “Impossible is just a big word thrown around by small men who find it easier to live in the world they’ve been given than to explore the power they have to change it. Impossible is not a fact. It’s an opinion. Impossible is not a declaration. It’s a dare. Impossible is potential. Impossible is temporary. Impossible is nothing.”
l “He’s (Sonny Liston) too ugly to be the world champ. The world champ should be pretty like me!”
l “Hating people because of their colour is wrong. And it doesn’t matter which colour does the hating. It’s just plain wrong.”
l “It’s not bragging if you can back it up.”
l “I’m the most recognised and loved man that ever lived cuz there weren’t no satellites when Jesus and Moses were around, so people far away in the villages didn’t know about them.”
l “It’s just a job. Grass grows, birds fly, waves pound the sand. I beat people up.”
My favourite quote is: “Live everyday as if it were your last because someday you’re going to be right.”
True, because one day, some day, each of us will all go, as he has done.
Rest in peace Muhammad Ali!