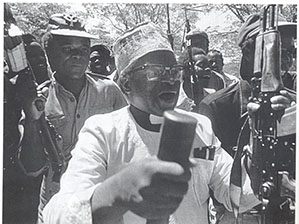 THE Security Force Auxiliaries (SFA) also known as ‘Pfumo Revanhu’ though described by the Rhodesians as an embarrassing failure in the effort to stem the guerrilla tide that was fast engulfing the Rhodies, caused untold suffering abusing villagers with impunity.
The Rhodesians overstretched and under-resourced in the late 1970s created the Auxiliary force made up of Africans hoping to contain the freedom fighters and their looming victory.
History notes that the initial intention of turning captured freedom fighters to fight for the Rhodies were quickly abandoned due to a shortage of captured men and most importantly unwillingness by those captured to become Rhodesian collaborators.
To fool the people into believing that the force was a people’s force seeking to protect them, it was led by Bishop Abel Muzorewa.
Armed with AK47s riffles used by guerrillas, the auxiliaries terrorised villagers.
As the war reached its peak in the late 70s, the liberation fighters had an upper hand over the Rhodesian mercenaries who were dying in their numbers.
The Rhodesians discovered that the only way they could reinforce their army was by looking for weak Africans who believed in white supremacy to work hand-in- hand with.
Bishop Muzorewa was the suitable candidate because of his loyalty to the Rhodesian racists.
Sad tales of these characters that were mostly the riffraffs of society, that were enticed with money and a bright future as well as ‘beautiful’ homes after the war, abound in the villages around the country.
In 1976, a military training base was opened at Muchapondwa Business Centre in Musana Tribal Trust Lands.
And from this base, horror was unleashed onto villagers in the area as well as Domboshava.
A salary of $29 per month, a uniform and tinned beef saw some Africans turning into rabid dogs doing the bidding of Rhodesians and violating fellow villagers.
The Auxiliary forces in Domboshava and Musana operated under the command of the infamous Selous Scout Roy ‘Muzezuru’ Bennett, the current MDC-T treasurer-general.
Bennett and his cronies in the company of the Auxiliaries committed gruesome acts.
Victims of the Auxiliaries who spoke to The Patriot recently revealed horrific experiences endured at the hands of the Rhodesians and their so-called African ‘allies’.
One of the villagers in Domboshava, Fungai Mawire, remembers being taken to the Auxiliary base in Musana.
“I was arrested in 1976 in May by the Selous Scouts who were led by ‘Muzezuru, Bennett,” he said.
“I was shocked to see that most of the recruits there were young boys from our village.
“We thought that many of the youths that we saw had gone to join the struggle in Mozambique.”
What struck Mawire the most was how the youths had been sort of ‘brainwashed’ into believing that the white man was superior.
“I tried to talk to some boys from my village pleading with them to stop selling out, but they laughed at me,” Mawire said.
“They told me that Africans could not win against whites.”
Mawire describes how the Auxiliaries were used to forcibly take cattle from the villagers and slaughter the beasts for Rhodesians who transported the meat to their bases.
At this advanced stage of the war, the Rhodesians were feeling the pinch and facing serious budget constraints.
While at the camp, Mawire recalls women screaming for help.
“I heard my cousin from Berejena Village screaming while they were being raped by the Auxiliary forces,” he said.
Mawire was later moved to Makumbe Mission Base from where Bennett operated.
He went with three teenage girls that were to be sex tools for the superiors at the base.
A woman who survived the brutality of the auxiliaries, Mbuya Tsitsi Mutake (not her real name) said the cruelty perpetrated by the auxiliary forces seems to have been forgotten.
“We suffered at their hands because they were cruel and abusing us for their fun,” she said.
Mbuya Mutake said she was captured by the Auxiliary forces with her daughter, daughter-in- law and four other girls from her village.
“We were captured by six auxiliaries and accused of feeding the guerrillas,” she said.
“The incident remains the most traumatic experience I underwent during the war.
“I was humiliated.
“They raped me in front of my daughter-in-law and my children.
“Ndakabatwa chibharo nevarume vashanu mwana nemurora vakatarisa, takava nyama yamagora kwemwedzi mishanu.
“Kubhinywa ndiro raitova sadza.”
A former Auxiliary soldier who resides in Chirimuta, Domboshava, and refused to be named, said they collaborated with Rhodesians for monetary benefits.
“They promised us a monthly salary of $29 which we received,” he said.
“We led a pampered life, but on hindsight we realise that we sold out big time.
“Shuwa dai ndakaziva haitungamiri.”