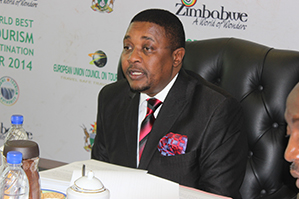 ENGINEER WALTER MZEMBI has been proposed by the Government of Zimbabwe to contest the position of Secretary General of the United Nations World Tourism Organisation (UNWTO).
Under Mzembi, Zimbabwe’s tourism story has witnessed a meteoric rise from the dust.
The story is meant to be different this time around; a fresh face, a new Secretary General of the United Nations World Tourism Organisation (UNWTO).
Zimbabwe endured a treacherous run from year 2000 when Western countries, after being accosted by Britain, slapped Harare with sanctions over the Land Reform and Resettlement Programme.
Before the sanctions were imposed, Zimbabwe used to receive more than 2,5 million tourists every year.
However, that figure has since gone down to slightly over a million in recent years.
Before the country was hit by sanctions, 45 airlines were servicing the country and to date, only seven airlines are plying the route resulting in few tourists visiting the country.
And as a result of the senseless and widely discredited embargo, Zimbabwe lost over US$100 billion in potential revenue from exports and tourism.
When Mzembi became Tourism Minister there was a swift turnaround for fortunes of the sector.
His nomination for the post can best be described as the Zimbabwean invasion of global tourism.
Zimbabwe deserves this honour.
Mzembi deserves that recognition.
He has proved his mettle.
Under Mzembi’s tutelage at the Tourism Ministry, Zimbabwe has had its moments.
In 2013 we hosted the UNWTO meeting.
We were also conferred with the honour of the 2014 Best Tourism Award and the World’s Most Preferred Cultural Destination by the European Council on Tourism and Trade (ECTT).
Tourist arrivals have also increased dramatically with 2015 figures released by the Zimbabwe Tourism Authority (ZTA) showing that the number of Chinese tourists to Zimbabwe grew by half in the first six months of the year.
This pushed the overall increase in foreign visitors for the period up by seven percent.
Zimbabwe’s overall tourist arrivals were at 930 276 for the period, compared to 876 163 registered in the prior period.
Arrivals from mainland Africa were
811 717, up from 745 566 in 2014 representing a nine percent increase.
Mzembi, who is targeting US$5 billion in revenue from the tourism industry in the next three years, feels his ministry’s destination awareness campaigns in China are bearing fruit.
The UNWTO is his for the taking.
Already he has served as chair of the UNWTO Commission for Africa.
All that our man needs is support from his countrymen and women.
The UNWTO is the United Nations agency responsible for the promotion of responsible, sustainable and universally accessible tourism.
In 2015 the UNWTO Barometer showed tourism contributed about 9 percent in terms of global Gross Domestic Product (GDP), employed 266 million people and generated US$1,5 trillion.
UNWTO encourages the implementation of the global code of ethics for tourism, to maximise tourism’s socio-economic contribution while minimising its possible negative impacts and is committed to promoting tourism as an instrument in achieving the Sustainable Development Goals (SDGs), geared towards reducing poverty and fostering sustainable development worldwide.
UNWTO generates market knowledge, promotes competitive and sustainable tourism policies and instruments, fosters tourism education and training, and works to make tourism an effective tool for development through technical assistance projects in over 100 countries around the world.
UNWTO’s membership includes 157 countries, six associate members and over 480 affiliate members representing the private sector, educational institutions, tourism associations and local tourism authorities.
Zimbabwe joined the organisation in 1982.
Defending Zimbabwe
Mzembi has been a fierce critic of the sanctions against his beloved Zimbabwe.
Sometime back he touched a raw nerve when he suggested the European Union (EU) had to bankroll Zimbabwe’s economic turnaround as happened with the reparations that developed Germany and Japan following the end of the Second World War as compensation for the illegal economic sanctions.
“It is instructive to note that in all this, diplomatic engagement between Zimbabwe and the rest of the international community has remained intact, with no single initiative to close missions from our end,” said Mzembi.
“The Zimbabwean counterpart to re-engagement must engage in this exercise (compensation), which I put at no less than US$100 billion since the turn of the millennium.
“We were robbed of this income intellectually and materially.”
Zimbabwe, Southern Africa and indeed the rest of the continent is solidly behind you.
Let those with ears listen.