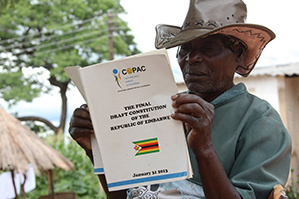 IN 2010, during the Government of National Unity (GNU), the people demanded an opportunity to contribute to the making of a democratic indigenous Constitution.
According to non-governmental organisations reports, the people had not been given a democratic opportunity to say how they wanted to be governed from Rhodesia through to the ZANU PF Government.
Hence during the GNU, representatives from all sectors of society and political parties in the country asked the people what kind of a nation they wanted.
These responses were then incorporated into the 2013 Constitution.
The Constitution’s Chapter 1, Section 6, Sub-Section 7 states that: “…promote public awareness of this Constitution, in particular by – requiring this Constitution to be taught in schools and as part of the curricula for the training of members of the security services, the civil service and members and employees of public institutions; and (c) encouraging all persons and organisations, including civic organisations, to disseminate awareness and knowledge of this Constitution throughout society.”
Four years down the line, the Ministry of Primary and Secondary Education, mandated by the supreme law, after provincial consultations, with approval from the Cabinet introduces a new curriculum albeit on a shoestring budget and Lo — there is uproar!
Parliamentarians ‘boo’ and publicly question the relevant Minister, Dr Lazarus Dokora, if his beard reflected his true intentions to sneak in Islam.
Government officials, suddenly unsure, are rattled and stumble in countless interviews.
Teachers’ unions gather to petition and denounce the curriculum.
Parents and care givers join in the alarmist frenzy, pushing school heads to the brink of indecision.
Churches conduct all night prayers to purge an ‘evil’ in the land.
Media practitioners, unsure and without research, join in the attack on the curriculum.
“Hatidi kuti vana vedu vadzidziswe zvemashavi nemidzimu.”
Yet, Chapter 2, Section 13 of the Constitution says: “The state and all institutions and agencies of Government at every level, and all Zimbabwean citizens must endeavour to preserve and protect Zimbabwe’s heritage (Respect for traditional institutions).”
They question: “Makambozvionepi kuti tinodzidzisa vana vedu maths nescience nechiShona?”
But Chapter 1, Section 6 makes it clear that Zimbabwe has 16 official languages.
“The state and all institutions and agencies of Government at every level must: 3 (a) “Ensure that all officially recognised languages are treated equitably;
(4) “The state must promote and advance the use of all languages used in Zimbabwe including sign language, and must create conditions for the development of those languages.”
The Christians charge: “Dokora arikuda kuhwanda necurriculum kupinza zvechiMuslim muzvikoro ,”
“Zimbabwe is a Christian nation, hatidi zveIslam,”
“Dokora arikuita kuti vana vedu vanamate flag vopira midzimu,”
It does not matter to them that the pledge was taken from the introduction of the Constitution.
Again it does not matter to them that Chapter 1, Section 3, Sub-Section (d) of the Constitution they accepted through a referendum is unambiguous:
“Zimbabwe is founded on respect for the following values and principles – the nation’s diverse cultural, religious and traditional values.
“Recognition of the rights of ethnic, racial, cultural, linguistic and religious groups”
And, this means that Zimbabwe is a state that embraces diversity.
This then brings us to the question: “Who wrote the Constitution and on whose behalf ?”
If the nation is shocked by the new curriculum, which designed its content in accordance with the people’s constitutional demands, then who wrote the Constitution?
Those who sat on the panel during the drafting of the Constitution like former Education Minister David Coltart are quoted in the media calling the curriculum that implements the Constitution ‘disastrous.’
This is in spite of the fact that during his time, David Coltart was notorious for bringing in books that were not even part of the syllabus.
In 1999 C.T. Nziramasanga was commissioned by the President to look at the gaps in the education system.
The country was already boasting a high literacy level, but without any tangible evidence of this literacy.
Loosely translated, the boast implied the majority of Zimbabweans could only read, write and not create.
This meant our literacy levels were superficial.
This is evidenced by the number of people who are against the curriculum but have not read it.
They have only heard about it from ‘opinion makers’ who ‘claim’ to have read it.
Those with their own agendas, like Coltart, simply label it a ‘ZANU PF thing’ — never mind the logic behind it.
Our literacy levels mean that we read something on social media, hear something in a hair salon or kombi and make life-changing decisions based on it.
Some will even declare they heard it from someone who knows so and so, therefore it is a fact.
Very few take time to critically and objectively analyse anything handed down to them.
A racist once said, “Black people do not read and if you want to hide anything from black people, put it in a book and they will never find it.”
It is a stereotyping remark made undeniable by its consistence with post-independent Africa’s under-development.
It seems that African education systems have created only the need for foreign things but not the wisdom or logic to manufacture them.
We are wooed by European and Asian innovations yet we never feel the need to create the same.
We just want to work for them!
Isn’t this tragic?