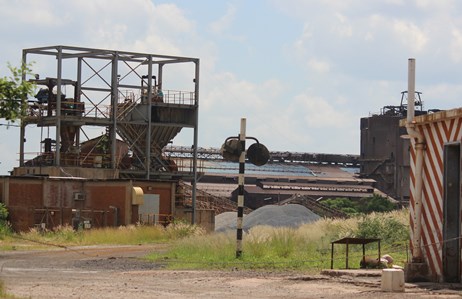 IF there is a project that is shrouded in ‘secrecy’ and the public is misinformed about, it is the re-opening of the country’s steel giant ZISCO Steel, now New ZimSteel.
It is almost impossible to know what is happening because of all the misinformation surrounding the giant steel maker.
The management and the workers are in the dark.
Government has made promises and announced many false starts.
Everyone has been kept guessing on why the much publicised Essar deal is taking so long to materialise.
The company, once the pride of the nation and a source of livelihood for a population of over 100 000 people in Redcliff and Kwekwe, has been closed for seven years.
The steel company stopped production in January 2008 due to choking financial and debt constraints and since then, there has not been any commercial production of iron and steel at the plant.
Before its collapse, ZISCO Steel was the largest integrated steel works in Africa with a capacity to produce one million tonnes of the commodity annually.
The company, at its peak, used to produce over 50 000 tonnes of prime iron and steel and had a staff of about 6 000.
However, in 2010 there were rays of hope as Government awarded the tender for the takeover and resuscitation of ZISCO Steel to Essar Africa Holdings, an Indian company in a race that attracted 14 other world’s largest steel makers such as Arcelor Mittal and Naveen Jindal headed by Jindal and Power Limited from India.
Essar agreed to buy 54 percent of ZISCO Steel in a deal initially worth US$750 million with the Government keeping 36 percent and minority investors 10 percent.
As part of the deal, Essar was to clear the company’s foreign debt which amounted to US$300 million and to share the domestic debt, which amounted to US$72 million based on the shareholding structure.
Among the external creditors were German Bank KFW and Chinese Firm Sino-Sure.
Apart from the plan to revive the ZISCO Steel plant and developing an iron ore beneficiation plant at Mwanesi, Essar would invest several millions of dollars into a 552 kilometre railway line.
The railway line would stretch from Mwanesi all the way to Savannem in Mozambique.
However, the multi-million-dollar deal for New ZimSteel’s revival failed to take off after too many ‘sticking’ issues were brought forth.
Initially, delays in restarting operations were attributed to Government’s failure to pay its share of the domestic debt.
The debt has ballooned to over US$200 million up from US$72 million in 2010.
Hence Essar was hesitant in implementing the deal fearing potential litigation threats arising from the debts.
Later on, there were reports that progress had stalled after Essar demanded guarantees on key enablers such as access to water, electricity and coal, considered key to the revival of ZISCO Steel.
Along the way it emerged Government wanted to re-negotiate the terms of the deals citing some anomalies on mineral claims in the initial agreement.
This came up after then Minister of Mines and Mining Development; Obert Mpofu raised reservations about parcelling out the entire stock of the country’s known iron ore reserves estimated at over US$30 billion for just US$750 million.
There was an impasse between the Industry and Commerce and Mines Ministries over access to iron ore reserves.
The ZISCO Steel Group of companies includes the company’s mining arm, Buchwa Iron Ore Mining Company (BIMCO) now New ZimMineral, Frontier Steel, ZISCO Distribution Centre, Mwenezi Iron Ore claims in Chivhu, Ripple Creek Mine in Redcliff, some iron ore claims in Hwedza and Gwanda and Limestone claims in Kwekwe.
This is because while New ZimSteel falls under the Ministry of Industry and Commerce, New ZimMinerals is under the purview of the Ministry of Mines and Mining Development.
The deadlock that had stalled progress for nearly four years was resolved after the Office of the President and Cabinet took over the negotiations.
A compromise was reached.
Government eventually agreed to transfer 80 percent of the New ZimMineral rights to Essar while keeping the remainder.
“We finally agreed to grant Essar the concessions,” said Mines and Mining Development Minister Walter Chidhakwa in an interview this week.
“They have to formally apply for the concessions from the Ministry of Mines, but I have not yet received that application.”
The deal edged closer to reality late last year when the Government and Essar agreed to immediately operationalise the firm.
However, there is still no activity on the ground.
The situation at New ZimSteel is deplorable.
The plant itself is deteriorating and the workforce has been mostly involved in the recovery and processing of sundry products.
The study by the Zimbabwe Economic Policy Analysis and Research Unit said the country has lost over US$20 billion in potential revenue since the closure of ZISCO Steel.
The downstream impact on the non-functionality of New ZimSteel is staggering.
Steel is the lifeblood of various industries from construction, transport to manufacturing.
As such the cost of building a house in Zimbabwe or other commercial structure has ballooned since the closure of ZISCO Steel due to high costs of importing steel bars from neighbouring countries, mainly South Africa.
The downstream industries in Kwekwe and nearby areas which relied on steel from ZISCO Steel have closed shop leaving the formerly vibrant areas ghost towns now surviving off the scanty proceeds from small-scale gold and chrome mining activities.
How long shall the country continue to suffer while this giant steel maker remains dormant?