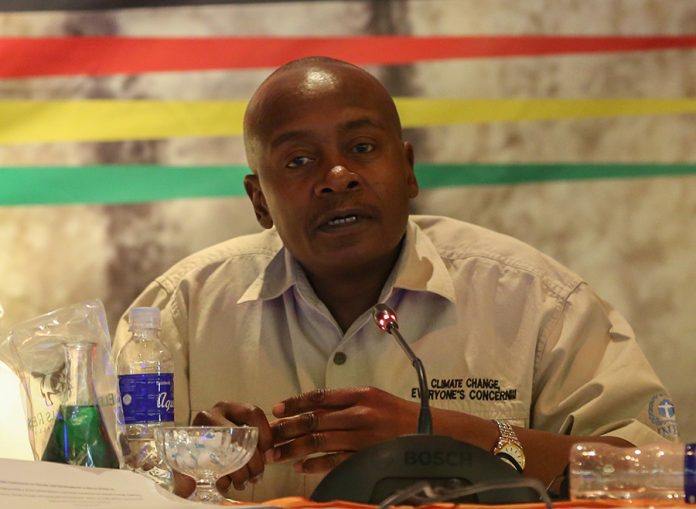 THE Ministry of Environment, Water and Climate has announced a normal-to-below normal 2018/2019 rainfall season.
Announcing this during the National Climate Outlook Forum this week, Permanent Secretary in the Ministry Ambassador Grace Mutandiro said there was need for relevant stakeholders to use this information effectively in planning for the season ahead.
Said Ambassador Mutandiro: “The 2018 to 2019 season shows reduced rainfall activity and that there is less chance of good rain. Scientists have discovered that not all El-Nino years will result in drought so this information will assist to sufficiently prepare for the forthcoming season.
“It is important that weather information be packaged in such a way that people understand it and that it is not a scare. Agriculture contributes 10,46 percent to the GDP and employs 70 percent of the population at the peak of our agriculture while 60 percent of raw materials are used by industry.
“The Ministry has been working out a matrix, with the water component being the main focus.
“So many water bodies are being underutilised and priority is being given to communities around these places to benefit.”
Professor Desmond Manatsa from Bindura University of Science Education (BUSE) said there was need to rely on the forecast issued.
“Temperatures are now playing a big role in the rainfall patterns and it seems we can no longer rely on the rainfall we receive, which shows that effective rain is now less,” he said.
“The Standard Precipitation Evaporation Index (SPEI) is a tool that is now being used to determine the monthly correlation between temperature and rainfall.
“From what we discovered in the last season, El-Nino impacts immensely in December when it is at its peak, meaning we cannot use the El-Nino Southern Oscillation (ENSO) system to predict rainfall.”
From the University of Zimbabwe, Juliet Gwenzi said more research needs to be done on how indigenous knowledge systems can assist in weather forecasting.
“Of the communities we have been working with, we discovered that the rural people use the crickets, cycadas, wind and trees to know when and how much rain will fall,” said Gwenzi.
“There is need for more studies to prove that these are not giving mixed signals as has been the case in some previous seasons.”
Others added that there was need to corroborate information gathered by the scientists along with indigenous knowledge systems in order to be precise when it comes to weather forecasts.
Sector representatives underscored the need to have the correct and adequate information in order to ensure emergency systems are up to date.
Acting director for the Meteorological Services Department (MSD) Washington Zhakata noted that weather forecasts are priceless.
“Forecasts are a planning tool and these should guide the farmer to either engage in intercropping or stagger his planting or increase the use of irrigation,” he said.
Other meteorologists concurred with Zhakata, highlighting that the 10-day forecasts are key to every farmer.
Concern was also shared that the use of maize as a standard threshold should stop and the accommodation of small grains be done to accommodate the farmers who plant these.
Meanwhile, the Zimbabwe National Water Authority (ZINWA) has highlighted that the current dam levels which are at 78,2 percent full, will cushion the country this coming season.
Speaking during the same event, an official from the authority said the urban water supply would last beyond December 2018 although the rural communities will experience a decline due to low inflows.
At least 221 boreholes have been drilled, while 48 small dams were rehabilitated and 158 weirs were built in order to enhance water supply.
A response committee is in place to help alleviate any crisis in the event that it occurs.
Civil Protection Unit (CPU) official Sibusisiwe Ndlovu said: “With the backlog on early recovery measures from Cyclone Dineo in the 2017/2018 rainfall season, there is need to up scale efforts for this year’s season.
“Scaling up education and awareness for the 2018-2019 rainfall season is crucial.”