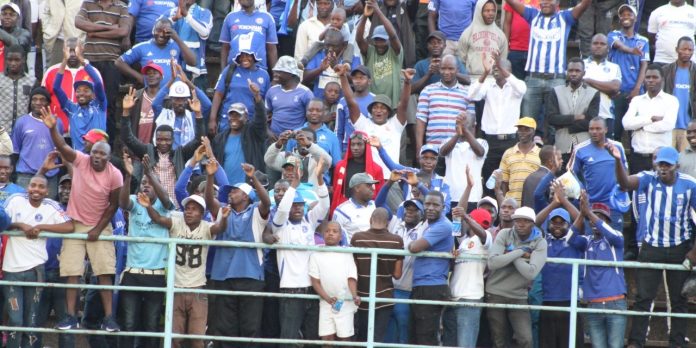 ZIMBABWEAN football lovers eagerly wait for soccer administrators (ZIFA, Confederation of African Football (CAF), FIFA) and Government’s decision on the future of the game currently suspended due to the Covid-19 pandemic.

There is a gleam of hope that the local league might resume this summer after the continental soccer governing body CAF announced the recommencement of the Africa Cup of Nations qualifier matches.

The biannual continental soccer tournament’s qualifiers were suspended in March and will now resume in November.

The tournament slated for January 2022 in Cameroon will see qualifiers ending in March next year.

However, uncertainty remains on the local front as fans remain unsure of when they will experience the Harare derby, the Battle of Zimbabwe, the Battle of Cities and the Bulawayo derby.

All football activities have been paralysed since March as a mitigatory measure for Covid-19.

Zimbabwe is still battling with the spread of the virus.

Football remains a high risk sport as players, coaches and officials have contact while multitudes attend live matches but most institutions lack the financial muscle to procure all the required testing and screening materials.

Soccer and rugby remain banned by the Government while other sporting activities have been allowed to start.

Zimbabwe’s Premier Soccer League failed to start in March as scheduled and local football administrators had provisionally set August/September for local action to resume. However, the developments on the health front seem to be worrisome.

The upward trajectory of local infections cast a shadow on the resumption of such sports.

Football stakeholders are debating which way serves both the interest of the game and health without compromising the other.

The Zimbabwean soccer landscape is different from the rest of the world.

Here, teams get their income from gate takings and there are no lucrative TV rights.

Furthermore, the state of our stadia in Zimbabwe will not cope with the rain season as most have poor drainage.

Most matches will be played in a soggy pitch which is dangerous to the players.

Zimbabwe aligned the 1998-99 season to that of Europe and pitch problems dogged the league.

As a result the calendar was reverted to the traditional March to November season.

Before the recommencement of the season, several stadia in Harare had not been upgraded because of their poor state.

Poor drainage is one common problem in the stadia in Zimbabwe.

Taking lessons from the Mbada Diamonds Cup final of 2011, played at the giant National Sports Stadium between Dynamos and the defunct Motor Action, our pitch need a lot of attention.

The match was played in December, one of the months that Zimbabwe receives plenty of rainfall.

As the match was in its early stages, rains pounded the giant facility resulting in a stoppage.

The ground was turned to a dam within minutes.

Efforts to scoop the water with helmets were all in vein. Postponing the game was not an option, so play was allowed to continue. It was Dynamos who won taking advantage of the turf and scrapped a winner when Motor Action goalie Marlon Jani spilled a Roderick Mutuma shot.

The pitch was an enemy of skill as the ball struggled to move across the water-logged stadium.

For now to postpone the league to next March is too bad for the game.

But what did other nations do?

South Africa, our closest neighbour have resumed their league to finish off the remaining matches of the season that were affected by Covid-19.

The fact that South Africa have the highest number of Covid-19 cases but managed to restart the season gives hope to its neighbour.

Zimbabwean teams may struggle to foot the costs of frequent testing of players and officials.

For European teams, a sound financial background worked to their advantage and matches are being played.

A new season beckons in United Kingdom in the English Premier League (EPL) and transfers are happening.

Business is back to normal in the German’s Bundesliga, while more European countries are following suit.