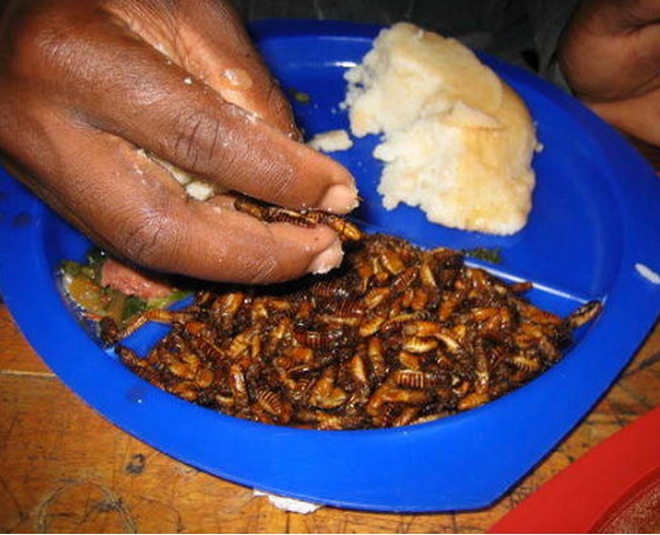 BEFORE humans had tools to hunt or farm, insects represented an important part of their diet.
Edible insects have provided economic, nutritional and ecological advantages to the indigenous populations in Zimbabwe and the world at large.
Many people from different cultures in the country have incorporated insects in their diets.
In the past, people would collect large numbers of locusts to use as food.
They were a valuable resource for the people, especially during the droughts.
The locusts were cooked in salt water and dried in the sun.
According to research, the edible insect species include, butterflies, moths, beetles, ants, bees, wasps, grasshoppers, crickets, cockroaches, termites and dragonflies.
Other commonly eaten insects are cicadas.
Insects are known to be eaten in almost 80 percent of the world’s nations.
Hundreds of people would come together during the rain season to gather different insects and bugs such as the mopane worms, shwarara, tsambarafuta, madhumbudya and harurwa or stink bugs, among others.
These are harvested, cooked in sand and stirred in hot ashes and stored for future use.
During the rain season, the BaTonga people of the Zambezi Valley dig into the ground looking for nests of honeypot ants.
The workers of these ants collect honeydew from scales and psyllids and feed it to other worker ants, which would become storage containers for the sweet liquid.
The ‘storage’ workers are found in the nests.
The ‘honeybag’ bee, a stingless bee, also provides sweet treats for the BaTonga.
The ‘honeybag’ is actually the bees’ hive.
In order to find the ‘honeybag’, the BaTonga catch a bee feeding on nectar, use sticky plant juice to stick a leaf or flower petal to it and let it loose.
The bee would invariably fly straight home.
The attached leaf or petal would slow down the bee and make it easier to see and follow.
The BaTonga have used insects as human food since ancient times.
They still feast on termites, crickets, grasshoppers, caterpillars, palm weevil larvae and compost beetle larvae.
Termites are collected by placing a bowl of water under a light source.
The termites are attracted to the light and will then fall into the water.
If large numbers of termites are gathered, the excess is sold at local markets.
People of all ages eat the winged reproductive termites, but the queen termites are considered a delicacy and are only eaten by adults.
The termites are roasted over a fire, hot coals or fried in a pot.
After cooking, the wings are removed and salt is added to taste.
Crickets are collected from soil tunnels which they build.
The crickets are roasted over a fire or hot coals.
The guts are removed before eating.
Grasshoppers are prepared and eaten in a manner similar to crickets.
They are eaten by people of all ages and there are no taboos associated with them.
Some farmers will eat uncooked grasshoppers after they remove the grasshoppers’ guts.
Masonja are caterpillars that is collected from the sheabutter tree.
They are boiled and dried in the sun before eaten.
They are widely used as an ingredient in vegetable soup.
There is also a large edible insect called the palm weevil which can grow to three centimetres.
The mature larvae are fleshy and grub like with a high fat content.
These insects are collected from the trunks of palm trees.
Then there are the compost beetle or larvae are even larger than the palm weevil larvae.
They live in garbage or manure piles or swampy areas.
The end of the abdomen, which contains the guts, is removed before the larvae are washed and fried.
Researchers have argued that edible insects provide a unique opportunity for insect conservation by combining issues of food security and forest conservation through a solution which includes appropriate habitat management and recognition of local traditional knowledge and enterprises.
However, according to the Food and Agricultural Organisation: “Among forest managers, there is very little knowledge or appreciation of the potential for managing and harvesting insects sustainably.
On the other hand, traditional forest-dwellers and forest-dependent people often possess remarkable knowledge of the insects and their management.”
Similarly, researchers have stated that rural populations, who primarily ‘search, gather, fix, commercialise and store this important natural resource’, do not exterminate the species which are valuable to their lives and livelihoods.