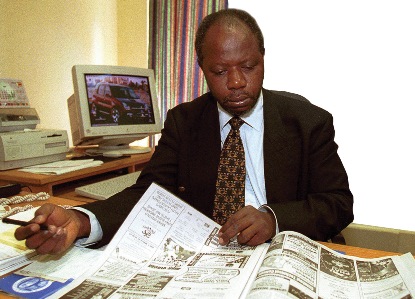 AMONG all of Geoffrey Nyarota’s acts of treachery against Zimbabwe, the most diabolic was his use of The Daily News as a platform for rallying Rhodesian and neo-Rhodesian efforts (both internally and externally) to defeat the African land revolution.
On February 10 2000, The Daily News celebrated the British Labour Party’s abandonment of part of the Lancaster House agreement of 1979 whereby the British government had accepted responsibility for compensating white commercial farmers when and if the new Government of Zimbabwe took back farmland for redistribution to the dispossessed African majority.
The new British administration of Tony Blair reneged on this 1979 understanding through Clare Short’s letter in 1997.
The Daily News was euphoric when this new British position was restated in 2000.
‘UK refuses to pay for land: Denies any obligation to compensate (white settler farmers),’ was the headline.
Then on November 7 2000, The Daily News celebrated the fact that Denmark had cut so-called ‘aid’ to Zimbabwe and insisted that the aid would be restored only if the African land reclamation movement stopped seizing and occupying ‘white farms’.
So pleased was Nyarota and his editors that on November 9 2000, they published an editorial entitled ‘Denmark’s (sanctions) gesture our last hope’.
In other words, we Zimbabweans were such a hopeless lot that “our last hope” depended on Danish intervention against the reclamation of our stolen inheritance in land.
Nyarota was so determined to normalise and mainstream the white racist view of the land revolution in Zimbabwe that he resorted to denigrating the African majority view by inviting whites to mock Zimbabweans.
On September 19 2000, Nyarota published a story based on Judy and Michael Carter who had reduced African land hunger and the land revolution to a joke.
This was the story of the white couple, Judy and Michael Carter, who went to Hamm, Germany, and hoisted the Zimbabwe flag at the site which Judy said once belonged to her great-grandfather Haarhoff, 314 years ago.
What was the point?
Well, according to The Daily News, Michael and Judy said when they invaded the farm, which was once owned by Judy’s great-grandfather, Germans took it as a joke.
They were using the Zimbabwe flag, of course.
The story was meant to disparage the Third Chimurenga; and the MDC formations have told similar stories with the same intent.
The white couple and the newspaper carrying the story were engaged in media techniques used in advertising and propaganda.
These techniques are among 10 or more different ways by which editors, writers and propagandists are able to lie without ever being called liars. The main one used in The Daily News story was that of creating false associations and false analogies which were left unstated, but all the same made clear by implication and insinuation to the reader.
There was also a secondary strategy used by the white couple which is called begging the question.
This is the strategy of avoiding the most urgent and most critical issue at hand by creating a secondary or even tertiary issue which is then elevated to the status of ‘the real problem’.
In other words, there was no land revolution taking place in Germany. So the parallel was a matter of begging the question on the part of Nyarota.
The first false analogy and association was between the Federal Republic of Germany and Zimbabwe.
This analogy was false in terms of the two countries’ histories.
It was also false in terms of the daily living conditions of the majority of the dispossessed people of Zimbabwe in relation to the daily living conditions of the Rhodesian rump in Zimbabwe.
The second false association was between the presumed ‘Germans’ who took the notion of land reclamation as ‘a joke’ and the overwhelming majority of the people of Zimbabwe whom the white couple wanted to persuade also to see the land reclamation principle and movement here in Zimbabwe as ‘a joke’.
Nyarota knew better than even to attempt this.
But as a mercenary editor, he had to do it: make a joke of the African demand to reclaim white-stolen land.
This ‘joke’ association was false on two counts.
The Carters and the MDC formations did not know for sure that ‘Germans’ in fact regard land reclamation as a joke; and The Daily News and Nyarota conveniently let their sources off the hook because Nyarota’s job was to defeat the land revolution on behalf of white racists.
How could Nyarota prove that all Germans or half the Germans, or even one tenth consider the idea of indigenous land reclamation to be a joke? Were most European wars of the past not about land?
The third false association was in fact a projection, whereby the white guilt over atrocities committed by Adolph Hitler and the Nazis was wishfully transferred to President Mugabe and future generations of Africans in Zimbabwe.
This shows ethical incompetence at The Daily News and within MDC because the Africans of Zimbabwe were not even demanding to dispossess whites at all, although there was no question that whites enriched themselves as a racial group by dispossessing Africans, not just in 1890, but throughout the entire colonial period.
Only a moral imbecile would try to equate or associate Hitler and the Holocaust with President Mugabe and the demands of the dispossessed Africans in Zimbabwe.
Such an attempt, whether explicit or implicit, demonstrates a contemptuous and racist trivialisation of both Jewish and African history.
Hitler was not reclaiming his inheritance when he killed 20 million Russians in a war of aggression.
How can such aggression be in any way associated with Mugabe and African inheritance?