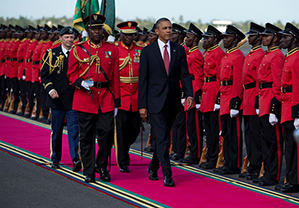 US President Barack Obama has been heralded as the first sitting President to ‘address the African Union’ (AU) and confirming that the Americans are focusing on engaging the continent and pursuing strategic policies to promote growth and development, encourage good governance and end conflict.
This could not be any further from the truth.
Obama’s visits to Africa have always been couched in some long-lost-son coming-home imagery, but unlike the prodigal son, Obama is seen as having some magic wand, which at the flick of the hand can solve all of Africa’s problems.
The truth is that in his two terms as President, Obama has yet to achieve any real policy victories in Africa.
He has struggled to balance a full plate of crises in other parts of the world; the accomplishments of the nation’s first African-American president appear noticeably thinner than those of his predecessor, former President George W. Bush.
As Obama came to the AU headquarters in Addis Ababa and proceeded to lecture Africans on the importance of good governance and the need to respect human rights, in a building built by the Chinese, we should have reminded him why he accuses the Chinese of not having Africa’s interest at heart.
For all his talk, Africa’s son has failed to meet expectations when it comes to prioritising the continent.
It has been argued that George Bush Jnr did more for Africa in comparison to Obama.
For all his faults, Bush started the President’s Emergency Plan for AIDS Relief (PEPFAR) to provide antiretroviral treatment and care for HIV and AIDS patients primarily in Africa – a programme credited with saving millions of lives.
He also increased development funding for the continent across a number of sectors, like education.
Obama’s most substantial initiative on the continent is arguably ‘Power Africa’, which was launched in 2013 with the goal of doubling access to electricity in sub-Saharan Africa.
The White House said a more than US$7 billion investment over five years would increase access by at least 20 million new households and businesses.
Last year, during the US-Africa Leader’s Summit – the first gathering of its kind – in Washington, D.C., Obama tripled those initial goals to 60 million electricity connections and 30 000 megawatts of energy.
Amid massive Chinese investment in African development in recent years, Power Africa has been criticised for not producing the promised results quickly enough.
E.J. Hogendoorn, deputy Africa programme director at the non-profit International Crisis Group, says it should not be a surprise that Power Africa progress is not yet tangible.
He says that the reality is that Africa remains a relatively lower priority issue for most of the political establishment in Washington and that is reflected in the Obama administration’s foreign policy priorities.
Conflicts in Africa are not receiving the level of attention as the wars in Iraq and Afghanistan did, as well as the fight against the Islamic State group.
However, terrorist groups are also a risk in Africa, with Boko Haram and al-Shabab regularly targeting civilians.
Coming to his speech at the AU, Obama talks of dignity and says, “Every person has worth.
“Every person matters.
“Every person deserves to be treated with decency and respect.”
It is unfortunate that he wants to talk of human rights and human dignity on a continent where he has no executive authority, yet he has failed to address the continued murder of blacks at the hands of law enforcement authorities back home in America.
Obama has run away from the debate on how there is systematic discrimination and abuse of black folk by white racist cops.
Obama claims that, “A child born in Africa today is just as equal and just as worthy as a child born in Asia or Europe or America.”
That is not true. Obama wants to extend his American delusions here. A black child born today in America is not equal to a white child, or even to an African child.
An African-America male child has higher chances of either being shot dead on the street by the police or being incarcerated before the age of 25.
An African-American female child is likely to be a single mother, working numerous jobs and with no hope of attending college.
That is the reality that Obama does not want to confront.
If Obama has failed to provide for those who came out to vote for him and make history as the first African American President, why should Africans treat him as their messiah?
Obama is just like any other American President, if not worse. The colour of his skin does not change the belief system he stands for which is guided by white capitalists.
As President Mugabe always says, Africa for Africans, it is time Africa realised that only the continent can solve its problems and not look to America, Europe or elsewhere for answers.
As long as Africa continues to be dictated to by others what it can or cannot do, it will remain subservient to the whims of outsiders.