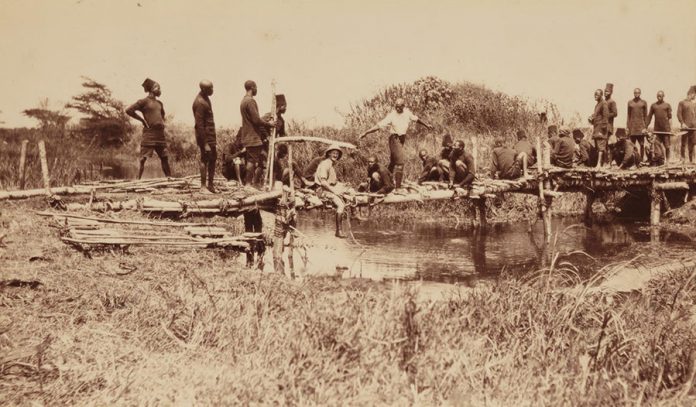 IN parts of the African continent where substantial numbers of European settlers had entrenched themselves, white settler-farmers also produced cash crops for markets.

For example, settlers in Algeria grew wheat and tended vineyards.

In Kenya, the British farmers planted coffee and raised dairy cattle, while in the then Southern Rhodesia (now Zimbabwe), they mostly planted tobacco.

Working conditions, however, for the indigenous African labourers on many of the white-owned farms, were often extremely harsh.

This was especially so in Algeria and South Africa.

The indigenous Africans had few options but to work for the white settler-farmers as they had lost so much of their productive lands to them.

Although slavery had been abolished, other forms of service substituted for it.

Forced labour became a part of the structures of taxation.

By the 1930s, wine produced on white-owned farms in Algeria accounted for more than half of the colony’s exports.

These farms, over the first half of the 20th Century, were becoming increasingly mechanised.

This resulted in a sharp decline in indigenous Algerian sharecroppers on whom the white landowners had at first depended for farm labour.

During the early 20th Century, native Algerians tried to regain some of the political power that had been stripped from them during the long years of French occupation.

Their efforts were thwarted, however, by the onset of the Second World War.

At the end of the war, native Algerians once again called for more autonomy in the region.

By 1958, in light of mounting anti-French sentiment, the European population of Algiers also rose in revolt, demanding that Algeria remain united to France. Half of the indigenous Algerian Muslim population of 8,7 million people were under the age of 20.

Two thirds were the rural poor practicing subsistence farming on lands that were steadily declining in productivity and acreage.  Another million were the urban unemployed or underemployed.

Algeria eventually won its independence from France in 1962.

In the late 1950s and early 1960s, the colonial era, for many African colonies, came to an end and most African nations gained their independence from their erstwhile European rulers.

It was only Ethiopia, which inflicted a decisive defeat on an Italian army at the Battle of Adowa in 1896, that managed to escape the process of colonial conquest.

Unfortunately, however, political independence did not always translate into economic independence.

This was mainly owing to the fact that most practices were inherited from their colonial past and the economies of the new independent African nations still depended significantly on the incomes received from agricultural exports and from the minerals and metals industries which were dominated by Europeans.

Thus, after attaining independence, most African economies still depended on the industrialised nations and were unable to industrialise themselves.

In addition to mineral wealth, the newly-settled Europeans encouraged production of cash crops such as rubber for industrial uses and cotton for cloth.

In colonies where there were not enough resources to grow the cash crop, workers were forced to migrate to urban areas and other colonies to earn wages to pay taxes in the newly contrived cash economy.

Once the era of colonial rule was fully underway, European governments preferred to rule directly and revoked the rights of companies to administer and police the territory.

However, the companies often continued to operate, owning mineral rights or controlling vast tracts of land on which they grew cash crops for export.

The emphasis thus shifted from establishing territorial claims, during the era of partition, to developing the colonial economies. The present-day country of the DRC, located south of the Congo River in Central Africa, has a short Atlantic Ocean coastline just south of the Angolan enclave of Cabinda.

Among the peoples who inhabited the region prior to the colonial era were the Luba, Lunda-Chokwe, Mongo, Yaka, Pende and Azande. By the middle of the 19th Century, the Congo River had become an important commercial waterway and control of it became increasingly important to the colonial interests of both Britain and France.

King Leopold II’s acquisition of the Congo was formalised by the Berlin Conference of 1884-1885.

He later convinced the Belgian Government to make him the sole recognised authority over the vast area; he named it the Congo Free State.

In 1908, the public exposure of human-rights abuses by King Leopold II forced him to turn the colony over to the Belgian Government.

It was then known as the Belgian Congo until it became independent in 1960.

With his territorial claims and personal authority solidified, King Leopold II then faced the tasks of gaining actual control of the land and making the colony profitable.

Taking physical command brought him and his agents into direct conflict with African rulers.

The eastern third of King Leopold II’s realm, for example, was controlled by the states in the trading federation controlled by an influential Arab-Swahili trader.

Realising that he would need a large armed force to take effective control of these regions, King Leopold II established a colonial army.

As with most colonial armies, it was composed mostly of conscripted African soldiers and European officers.

By about 1887, the Arab-Swahili traders’ influence in the region had declined, and he was forced to acknowledge King Leopold II’s sovereignty.

One of the most notable of these was a Nyamwezi trader who had established a kingdom through conquest over the people in the mineral rich Katanga Province in the southern Congo.

King Leopold II’s troops moved against his state and in the course of negotiations between the two groups, the trader was murdered.

This opened the entire southern part of the Congo to mineral exploitation.

For views and comments, email:  linamanucci@gmail.com