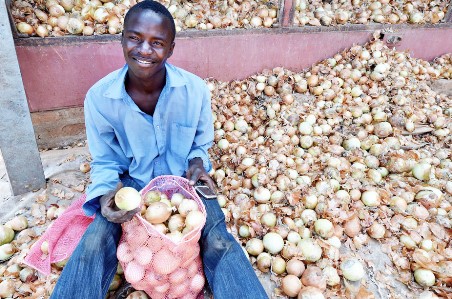 DEPRESSED by the growing trend where local retailers favour imported horticulture produce, local producers have been forced to downsize or abandon production.
The trend is quite worrying.
Supermarkets are filled with tomatoes, potatoes, grapes and apples imported mainly from South Africa.
Retailers argue imports are cheap; with local farmers justifying their prices by citing high costs of production.
South Africa subsidises its farmers and gives them export incentives which make their produce cheaper than local (produce).
Local producers depend on markets such as Mbare Musika in Harare where at times they are forced to reduce prices to compete with imports.
With most horticulture produce being perishable and farmers not having access to adequate storage facilities, they are left with no choice but to sell their produce at prices that are not viable.
Legislators have voiced the issue, urging Government to be consistent on its import regulations to ensure a level playing field for local farmers.
Has the market failed to appreciate the local horticulture producer?
Onion is one horticulture crop farmers can produce and competitively market locally, agronomist Ivan Craig has said.
Onions are a suitable winter crop.
“With most farmers having finished harvesting their summer crops, it is imperative that if they have access to water during this winter season not leave the land lying idle,” said Craig.
“Farmers can grow onions which have a good market.
“The cost of producing onions is not high and there is a potential that a famer can get favourable returns.”
Before embarking on an onion production venture, farmers should study the market.
“There are different types of onions including pickled, shallots, bulb onions and the farmers should first find out which ones the target market wants (sic),” said Craig.
Craig said for farmers to realise maximum yields, they should follow the correct procedures and ensure they have the right and adequate inputs.
“Onion seed are best sown between February and March and it is advisable to choose F1 or hybrid seed which has the potential to produce 120 tonnes per hectare (ha),” he said.
“If one opts for Open Pollinated Varieties (OPVs), they produce 10 to 20 tonnes per ha.
“A farmer requires four kilogrammes (kg) of seed per ha with between 1 000 and 1 500 kg of vegetable fertiliser per ha.”
Land preparation is key in onion production, Craig said.
“Land preparation has to be deep and before transplanting the seedlings the soils need to be irrigated first to field capacity,” he said.
“When transplanting, rows should be 20 centimetres apart to give roots space to spread.
“It takes three days for a transplanted seedling to establish.”
After establishment of the seedlings, a farmer should ensure there are no weeds in the field.
“It is important to keep the field weed-free as weeds compete with crops for nutrients and water and in most cases it is the crops that suffer,” he said.
“A farmer should also scout for pests and diseases as these will negatively affect yield if left unchecked.”
Craig said it was important for farmers to realise that onions required lots of water.
“Those in sandy soils, after transplanting, can follow the 10-to-12-day irrigation cycle while those in heavy soils use the 12-to-14-day cycle,” he said.
After two weeks from transplantation the onion leaves fall, a sign that it has matured, Craig said.
“If the leaves do not fall, a farmer can go into the field and break the necks manually,” he said.
“Three weeks from the falling of the leaves the onions will be ready for harvesting and they can be pulled out.
“After pulling them out, knit them into bundles and hang them in a storage area that is dry and well ventilated.”
Regular inspections must be done on the harvested onions.
“After every week the farmer should inspect his crop and remove any that are rotting as these can spoil the good ones,” said Craig.
Craig advised farmers not to dispose of the entire crop while it was fresh.
“The time when onions fetch the best prices on the market is between January and March as they are normally in short supply, so this is the time farmers should aim to sell their crop,” he said.
“Most growers sell fresh onions.
“Drying the onions and selling them when they are in short supply would be an advantage to the farmer.”
If correct procedures are followed and yields are maximised, farmers will be able to break even and result in producing horticulture crops during winter rather than letting land lie idle.