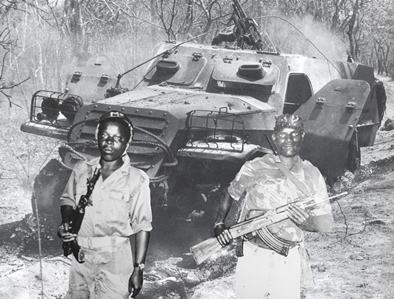 TWENTY four big wheels rolled past the bridge, past the mine and disappeared round the corner.
There was no time to contemplate what would have happened.
I crawled out from under the bridge and returned to my mine.
BV also crept out of cover and came forward only to stop at a safe distance from the mine.
All along I had been agonising over a solution.
Digging out the mine was no option.
I still loved my life.
I reopened my bayonet and again prodded.
The fresh tracks made by the heavy truck made it quite clear they had cut deep into the shallow pothole that held the mine.
A solution dawned upon me almost like the light Saul saw on his way to Damascus.
It did not come as a brain wave or some brilliant breathtaking revelation.
It was simple physics: The hole was too deep.
The pressure exerted by the vehicle was not sufficient to act on the detonator.
The soil we added acted as a cushion and absorbed all the pressure from the passing vehicles.
All I had to do was add some pebbles to the level of the gravel surface.
These pebbles, when pressed, would exert pressure on the detonator and the fireworks were sure to follow.
Using my bayonet, I gently prodded the pothole, loosening the soil that covered the mine.
I went down on my belly and gently scooped the soil out of the hole.
I took off my denim jacket and put the soil in it — I would need that soil later on.
I carefully removed all the soil until I had unearthed the plastic paper that acted as insulator.
I would go no further.
The plastic sheet had been neatly and tightly tucked into the sides of the mine – touching that would make me a war hero before I wanted to be one.
I could hardly conceal my excitement in finding this solution to an impossible problem.
I collected the two handfuls of stones about the size of pebbles and deftly laid them down in the hole.
BV should have thought I had gone mad as I wandered about the road picking up the pebbles.
I added another handful and arranged them neatly like a stone mason.
This was a deadly task, it needed care and diligence.
Satisfied with my effort, I stood back and took the soil on my jacket and sprinkled it over the rocks.
Very gently, I spread the soil to the level of the road surface.
I threw away the rest of the soil, shook my jacket and put it on.
There was one snag: It had rained and the soil was muddy.
Even in the darkness it was clear the road surface had been dug.
I had to sprinkle some water on the mine surface to obliterate any signs of mischief.
I had no container – I looked around – there was nothing I could use to hold just a drop of water.
The solution came from my head.
I took off my lovely canvas hat which had quite a history on its own and used it to fetch the water.
It was not the most fashionable headgear, but it served its purpose well.
It kept my head dry during the rain season.
I returned to my place of refuge with love and joy like that of an old bird that revisits its nest.
I scooped a hatful of water and sprinkled it on the surface.
Two more hatfuls made the job complete and I stepped back removing any signs of my presence using a branch.
I put on my headgear with pride and pleasure.
I wonder where I lost it.
It would have been a priceless souvenir now.
I walked to BV who had been watching the whole exercise from a safe distance and snapped a smart salute – operation over.
BV summoned the rest of the unit who had been covering both sides of the bridge and we marched back to base.
I was too tired, frustrated and annoyed to talk to anyone.
I nibbled a few morsels of sadza and went to sleep some distance from the rest of the unit.
I just wanted to be myself.
The mine exploded next morning at about 8:00am.
I was fast asleep – BV came with the good tidings, he was overjoyed.
For me, it was a shattering anticlimax and all the risks I had taken came like a flood into my mind.
“What exactly did you do?” he asked.
When I told him, his jaw sagged and he snorted: “Pebbles in a pothole?
“I can’t believe it!”