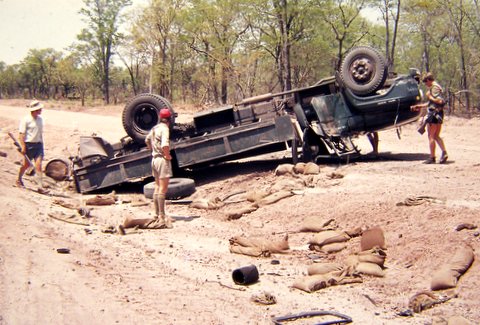 I QUICKLY crossed the road with Bvanyangu and looked for the land mine. It was just off the concrete apron of the bridge.
My heart sank and I knelt down almost in prayer.
The mine was there – it had not detonated.
There was a pothole exactly the diameter of the mine, what should I do? I asked myself.
I turned round in appeal to BV (we always called Bvanyangu BV because the name was a mouthful), but he was a safe 10 metres away. In the gathering darkness, he was too far to read the anguish and stress in my face.
This was my baby – one man one mine.
The landmine is a very nasty weapon, a powerful tool in the arsenal of a guerilla army.
It paralyses communication by gravel road networks.
Unlike artillery and the assault rifle, it does not announce its presence, it is a silent weapon.
But its silence is a paradox, its explosion is cataclysmic and can come long after it has been laid, sometimes months, if not years.
Most frustrating is you cannot hit back at the mine layer- he will be somewhere very far away from the scene like some spiritual being far way from the events that he has caused.
Anyone who has hit a landmine loses his mind for some time- especially the Rhodesians: those who survived the blast have a few stories to tell.
BV had been furious as we marched to the bridge. “…you know very well that tampering with a landmine already laid and has failed to detonate…” he broke off.
I remained silent and marched on.
“Why didn’t Mao offer to help you?” That was a rhetorical question it needed no answer.
Mao had declined to offer help. Like a worm, he had recoiled to his perennial refuge – a sprained ankle.
He went on, “Several comrades have perished – we have buried fragments of their bodies – a leg here, an ear there…”
Grisly detail, and I had seen some of it, at some point I was to carry the remains of a gun butt of one victim where they only buried the feet.
He sounded ghoulish!
My mind was racing the decision to call off mission was in my hands.
BV had laid the cards on the table.
“It is up to you to call off mission before we get there,” he growled. “No one will come near as you fiddle around with your little calabash” he warned in his low baritone voice.
Still, I failed to answer him.
My mind was racing.
I had to make a decision before we got to Inyati Bridge.
It was up to me to abort the mission – but then, why in the first place had I accepted the mission?
Mao, the section commander was responsible for this now, I was clearing the mess.
I will clear the mess, I resolved.
How could I tell BV how Mao, that first class bungler, had interfered as l laid the mine?
Mao, that little worm!
His brain was no bigger than a golf ball.
Damn Mao!
A string of four letter words followed…..now BV was screaming down my neck…abort mission!
We marched in silence for several minutes.
With emotion, I prayed to God, Mwari, Musikavanhu, the Almighty, the Creator of all things on earth.
I prayed that He could guide me out of this quagmire that Mao had thrown me into.
He would lead me, show me the way.
I was nothing, but a child. I appealed to the ancestors of the land – were they going to abandon me at this moment of dire need?
I was their weapon, I was fighting their war, to restore their glory they had to lead me.
I appealed to the war heroes – Nehanda, Chaminuka and Kaguvi to be with me as I was their bones.
These were their bones in action.
Would they abandon the bones that they said would rise and fight the oppressor?
I appealed to my own forefathers, mentioning all those I remembered by name that they should lead their offspring and guide me through this mire.
They should sit with the ancestors of this area and with Nehanda, Chaminuka and Kaguvi.
They should all work in unison and lead this little child of the soil who was fighting to liberate this land of milk and honey.
This was their mission.
I was astounded by my own sincerity and passion.
It gave me moral strength – it gave me energy and resolve to proceed with the operation.
So it was with renewed self confidence, determination and eagerness that I quickened my pace towards Satan.
A version of this story was published in the Horizon in 1996. The norms deguerre in this story have been changed.