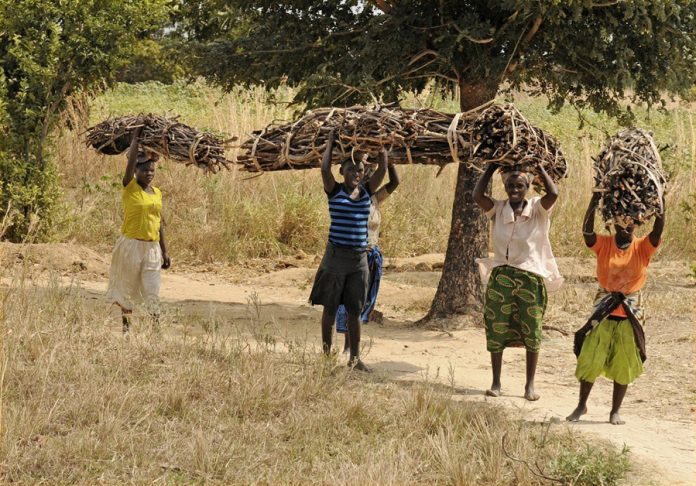 IN Africa, Women-headed households are

frequently faced with shortages of adult

labour which often results in declining

with the low level of agricultural inputs

In Morocco, the rural households headed

by women are generally small, with 69

percent having less than four persons.

Data from the Owambo region in Namibia

suggested that, although the size of

landholdings between male and femaleheaded

households is comparable, the

amount cultivated is often lower for the

latter due to labour shortages.

to turn to alternative crops that require

less labour inputs, even though they may

Only in Mauritania do women-headed

households appear to be better-off.

This could be explained by the existence

of a certain number of transfers and subsidies

towards these households, especially

have an average revenue of US$96 per

consumption unit and save 21 percent.

Those headed by women have an average

In the Congo, 75 percent of the women

than US$390 per year, which is insufficient

In Tanzania, surveys indicate that rural

women-headed households have the lowest

earnings and 25 percent of maleheaded

In 1990, significant improvements were

were 40 percent poorer than male-headed

households and 90 percent poorer than

means of production than male-headed

In Zimbabwe, in the communal sector,

female-headed households were likely to

be allocated smaller parcels of land than

Findings from surveys suggested that

de jure female-headed households had the

smallest farm sizes, varying from 40 to 80

percent of the land parcels belonging to

When women are involved as agricultural

labourers, they appear to be remunerated

less than men, which has negative

According to data collected by IFAD in

the late 1980s, women tend to receive only

50 percent of men’s wages in Mauritania,

Sudan and Zimbabwe, while they receive

90 percent of men’s wages in the Congo.

In Morocco, there are large variations

in agricultural wages, depending on the

season, the region, the nature of the work

than men and boys, despite a minimum

wage guaranteed by the Government.

In Sudan, wages are lower for women

than for men, which is also due to the fact

that they are assigned work in the lowerpaying

households are obliged to augment production

from subsistence agriculture with

cash or in-kind from other sources.

The main contributor to subsistence

across households is direct cash income

and social breakdown of the family have

shrunk the amount and frequency of

There has been a general recognition

that women and women’s concerns have

often been marginal or invisible to largescale

Some well-documented limitations of

women’s machineries throughout the

world include; restricted financial and human

resources and the lack of communication

and departments and other bodies dealing

Since the early 1980s, several countries

reported a growth in women’s participation

in rural organisations and in the

In Benin, women’s membership in

pre-co-operatives grew from practically no

While women’s membership is most

often limited by their lack of formal land

emphasise the interests of male members

and do not sufficiently concern themselves

with the needs of rural women.

For instance, the Namibia National

Farmers Union was established in 1992 to

provide a voice and organisational base for

However, its activities stress marketing

and surplus production for the commercial

farming sector rather than subsistence

In Africa, women’s representation is

and traditional bodies, where

A positive development was made in

reform which called for 25 percent of the

members of the village assembly to be

However, in many locations, women

still constituted less than one percent of

the candidates in the 1993 local Government

In Namibia, only three of the 95 elected

to the regional councils, which represent

rural constituencies outside of small

towns, were women; and in Tanzania, at

the provincial and district levels, women’s

participation remains low with the highest

number of women (20 percent) serving as

There were no female land officers nor

and only one regional community development

In both Namibia and Zimbabwe,

authorities has been minimal until more

held responsibility for allocating land and

While it appears that decision-making

in Africa rests with the male household

head when present, the sharing of

substantially from country to country, as

well as among different cultural and ethnic

groups within the same country.

In some countries, such as the Sudan,

women are responsible for a wide range of

decision-making in farming activities even

when the husband is present.

In Tanzania, decision-making in farming

activities appears to be shared, with

men slightly dominating in those cases

when it is not.

that the improvement of household food

security and nutritional levels is associated

with women’s roles in household decisions

are different, depending on their

ability to make decisions regarding income

to credit is lower than men’s in many African

countries; receiving from a low of five

percent of agricultural loans in Burkina

Faso to a high of 32 percent in Zimbabwe.

In Benin, less than five percent of the

Over the years, a substantial increase

in the number of women clients was registered

in Zimbabwe, increasing from 11

Dr Michelina Andreucci is a

interior decorator. She is a published

author in her field. For views

Plight of women in Africa