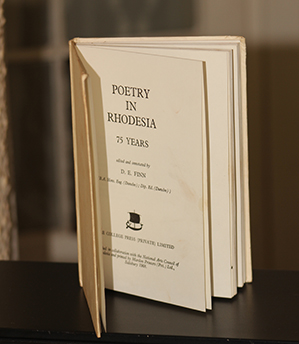 Poetry in Rhodesia
Edited by D.E Finn
Published by The College Press (1968)

FORMER Rhodesian Prime Minister Ian Smith once said blacks in the then Rhodesia were the ‘happiest Africans’.
This was despite the suffering and pain they had to bear under his brutal rule.
Were his sentiments sincere?
Certainly not; here was a man trying to cover up his evil deeds and justify his unpopular rule.
It is in the same spirit to try and convince the outside world that the life for blacks in Rhodesia was a bed of roses that the book Poetry in Rhodesia was published.
The book which is a compilation of poems by both blacks and whites living in Rhodesia was published in 1968 and edited by D.E. Finn.
Poems carried in the book were penned by the likes of Arthur Shearly Cripps, Lewis Hastings, J. M. Chamunorwa, Wilson Chivaura, Hugh Finn, Henry Pote and Gibson Mandishona.
The publishing of the book coincided with the 75th anniversaries of the then Salisbury and Bulawayo.
“The aim of this anthology has been to show this slow maturing of Rhodesian poetry to students in the upper forms at school and to the general public,” reads the foreword.
Through songs, poems, literature or dance, messages of day-to-day affairs of society and aspirations are portrayed.
One would have expected that if the publishers of Poetry in Rhodesia were sincere about bringing out the real story in Rhodesia, then there would have been poems highlighting the struggle of the black man in Rhodesia.
But alas this was not the case.
The poems by the black poets border on issues of love and beer.
Was this not a deliberate attempt to portray the blacks as a people who major on the minor?
One is quickly taken back to the first Shona book Feso by the late Professor Solomon Mutsvairo published in 1957 which was a narrative with subtle political implications.
The book which was widely read and even taught in schools was banned by the Rhodesian government in the 1960s.
The aim was to silence and suppress the real story of blacks in Rhodesia whose major theme was untold abuse and suffering.
For long the popular ideas promoted in mainstream media about blacks is that they are all about drug abuse, violence and illicit sexual relations.
It is this type of blackman that the whiteman wants to prop up.
In Edgar Musarira’s poem ‘Beer Pot’, he praises the beer pot and marvels at beer drinking.
“You are golden,
“You are made of pure earth,
“Earth that glistens,
“That is not baked, pure earth,” he writes.
When the settlers came to Africa, they displaced the blackman from fertile land which they took for themselves.
Without their land and livestock, black people were stripped of their dignity, inheritance and pride.
Ironically Mandishona in his poem ‘My Garden of Red Soil’ sings praises to his land which has been a source of livelihood.
The question is: Was this garden that he was talking about still in his possession or had it been forcibly taken away from him?
Was the poem inspired by memories of the good old days when he still owned the land?
“I am happy when early every day at my rising I begin to see that my garden of red soil is better than any other,” he writes.
It is only in J.M. Chamunorwa’s poem, ‘Afternoon Tea’ where the relationship between the blackman and whiteman is interrogated.
“With fingers all correctly poised
“they sit and sip their Russian tea
“while peering over porcelain cups
“and clearly, taking stock of me.
“I am a cuckoo in the nest
“a suspect of the first degree,
“for I am their unbidden guest,
“and carefully they study me,” he writes.
In the poem Chamunorwa highlights how blacks were treated as nonentities, third-class citizens by their white masters.
They had to stand and watch while the white masters enjoyed the fruits of their inheritance.
In the poems by the white Rhodesians, the poets heap praises on the good life they were enjoying in Rhodesia.
What they seemed to forget is that they were living on borrowed time and soon all that was going to come to an end.
And indeed after a protracted liberation struggle, Zimbabwe attained independence as the country was reclaimed by its rightful owners.
And 36 years on, the indigenes continue to enjoy the fruits of their hard-won independence.
However, one thing for certain is the whiteman still yearns for the ‘good old days’ in Rhodesia.
Rhodesians Worldwide on the internet is testimony to this fact.