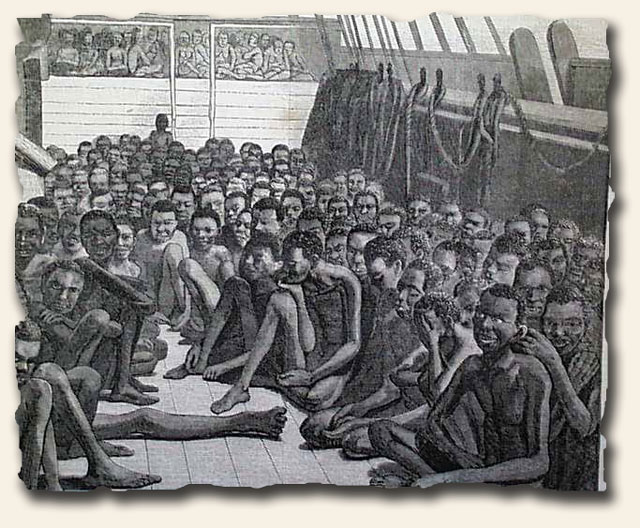 THE men, women and children captured and branded during slavery were held in dungeons in the basements of forts and castles strung along the African coastline.

The slave trading forts were owned by rival European nations taking part in the gross crime against humanity.

The Christian faith of the operators was ironically made conspicuous in one way or another.

The Portuguese christened one of their slave ships ‘John the Baptist’ and named their forts and castles after their Christian patron saints Jorge and Sebastio among many others.

The slave Fort Elmina originally belonged to the Portuguese before it was captured by the rival Dutch.

The Dutch proceeded to turn the ‘upper room’ of the male dungeon into their place of worship – the Dutch Reformed Church – with an inscription that said God only resided in ‘this place’.

The infamous British Sir Hawkins was revered as a deeply religious man who believed in ‘loving one another’ and worshiped his god twice a day for safe passage through the rough seas as he ferried his human cargo to servitude in the Americas.

Sir Hawkins had the blessings and protection of the British Queen.

He received his slave trading ship from the Portuguese Prince, Henry the Navigator.

The ship was called ‘Jesus of Lubeck’ and he renamed it ‘The Good Ship Jesus’.

The Dutch named their fort Leydsaemheyt which means ‘patience’ after took them a long time to build because of constant attacks from victim villages.

These dungeons were aptly called the ‘doors of no return’ because once the doors were shut, there was no hope of escape.

The doors were guarded by armed sentries who made any escape attempts or rescue suicidal.

Historian Edmund Abaka’s book, House of Slaves and ‘Doors of No Return’, vividly details life in the forts:

“Commercial bargaining for enslaved Africans began in the forts and castles with a physician thoroughly examining the enslaved to ascertain their physical fitness and to ensure that there were no ‘blemishes’ and no hidden deformities that would make them unsuitable for the tasks of the plantation complex.”

In the dungeon, one could hear the familiar sounds of home; the splash of the ocean and the cry of familiar birds, yet bound in a dark room with a hundred other people.

The dungeon was meant to ‘break’ the slave into a beast of burden in preparation for a lifetime of servitude.

Those who resisted where starved to death in purpose built air-tight cells and then tossed to the sea.

A lot more died from malnutrition as well as diseases like dysentery, diarrhoea and small pox.

Those who died during the night would only have their corpses thrown to the sea the next day.

A team of archaeologists excavated the British Cape Gold Coast male dungeon in 1972 dug out 44cm of dirt which they identified as the sediments of the captive’s faeces, blood and exfoliated skin.

This meant the captives fed, menstruated and relieved themselves in the same damp and dark enclosure where they were chained like beasts of burden.

For the women, the dehumanisation went a notch higher.

Beauty became a curse as any slave agent or master could grope and indulge himself on any woman captive who took his fancy.

The whole process translated to a necessary stage of dehumanisation ahead of a lifetime as beasts of burden without rights.

In the same vein, the first freedom to be ‘broken’ in the dungeons was that of communication.

Coming from different regions and language groups, the captured often had no common language with which to co-ordinate a common resistance.

The most painful part of this whole experience is in the ironies which were seemingly invisible to the practitioners of this black holocaust.

Just a level above the dungeons housed the splendor of white civilisation; carpeted floors, culinary finesse and Christianity.

The slave master who financed and did all this claimed to be championing the civilisation of Africa, totally oblivious of how the depravity they were exhibiting was actually exposing them as the ones needing civilisation.

It is not possible to mete out that kind of violence and degradation on another human being and still claim to be civilised.

The letters and diary entries of the slave agents and fort governors bear witness to this.

John Lok, a slave agent in New Guinea in 1554 writes “Negroes were a people of beastly living, without God, law, religion or commonwealth.”

Another slave agent Nicholas Owen writes: “…the inhabitants are hardly above beasts, ignorant of all arts and sciences, without the comforts of religion…”

Bosman, a governor at Elimina Castle, writes: “The negroes…are all without exception crafty, villainous and fraudulent and very seldom to be trusted; being sure to slip no opportunity of cheating a European or indeed one another.  A man of integrity is as rare among them as a white falcon…they indeed seem to be born and bred villains… These degenerate vices are accompanied with their sisters’ sloth and idleness; to which nothing but the utmost necessity can force them to labour…”

On the African’s part, the most painful part was to turn these forts, after slavery, into law schools and training schools for African law enforcement agents.

The most embarrassing was independent Ghana using one of these castles, Christanborg, as a presidential palace until 2011.