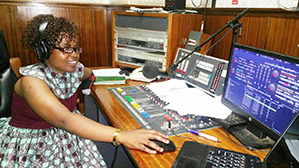 WHILE some radio presenters enjoy entertaining listeners with music and discussing the lighter and interesting aspects of human life doing rounds on social media and local tabloids, one presenter is doing it differently.
Rutendo Makuti Mubweza, of the popular Radio Zimbabwe is doing it differently.
The radio, besides being an informative and entertaining platform, is to her a medium to help the needy and desperate in society.
She joined the radio station in 2013 on attachment and impressed her superiors who would not let her go after her internship, but made her a part-time presenter.
In the relatively short time she has been on the airwaves, she has established a huge listenership because of the nature of her programmes which have mostly to do with charity.
‘Ruru’ or Mwanasikana wekwenyu, as she is popularly known by her ardent listeners, has made a tremendous impact through her programmes that have helped improve the quality of life of many people.
“She is a legend in the making,” said one of her keen followers, Tawanda Muganhu.
“If she is to continue on this trajectory, she will in no time have her name included on the list of veteran female broadcasters that includes Elsie Mojapelo, Tarisai Chipere, Tilda Moyo and Thabani Gambiza.”
Ruoko Runopa is one of the popular programmes on Radio Zimbabwe which Mubweza broadcasts on Sundays.
Many disadvantaged people have been helped through this programme.
Help received through the programme ranges from school fees to clearance of hospital bills.
Radio Zimbabwe listeners will forever remember how Mubweza broadcasted non-stop for 32 hours from January 1-2 2017 as she sought to raise US$16 000 for two-year-old Evelyn Nyakutombwa who is supposed to go to India for an operation.
Other fellow talented broadcasters joined Mubweza on this good cause.
Evelyn was born with a hole in her heart as well as a liver complication.
Evelyn’s parents survive on vending in Chitungwiza and have found it difficult to raise money for medical bills and travelling expenses to India for life-saving surgery for their child.
The marathon broadcast was successful and the required amount was raised by the end of the programme.
“Most of my workmates never thought I could make it as they even joked that I should have an ambulance on standby in case I fainted,” said Mubweza.
“During the marathon broadcast, I played music that appealed to our humanity.
“It was mostly gospel music.
“I appealed to well-wishers to donate whatever amount they could.
“The programme received an overwhelming response.
“My seniors, Lionel Mkandla and Radio Zimbabwe station manager Albert Chekayi were very supportive throughout the programme.
“Even people from outside the country responded positively as we got support from countries such as Zambia and South Africa.
“A Zimbabwean gentleman based in Mozambique had to drive all the way to the boarder to deposit US$100.”
Through Ruoko Runopa, students from poor families have been helped with fees while those who cannot afford hospital bills have also found help.
Other notable gestures include the support extended to an unemployed couple who bore triplets, but had no decent accommodation.
They received assistance after appearing on the programme.
After the programme, a woman from Hatfield offered the couple free accommodation while others offered clothes and toiletries.
Another of Rutendo’s popular programmes is Tipeiwo Mukana, which focuses on the physically challenged.
Usandikanganwe focuses on people seeking their relatives and friends.
Through the programme, many have found their long lost relatives and friends.
Despite being young, Mubweza has managed to handle serious programmes like Tsika Dzedu in a satisfactory manner.
Mubweza also travels around the country for her programme Nhasi Tirikwenyu, which focuses on developmental projects which are being undertaken by rural districts and various communities.
The programme also links communities and their leaders in solving problems.
Children do not want to miss her Saturday morning shows where she plays their favourite tunes.
She is Ambuya Mlambo in the making.
Mubweza had words of advice for local musicians: “As presenters we want to get your music to a huge audience but we also want you, musicians, to produce quality work that will appeal to our audience.
“Half-baked products not only diminish musicians’ standing but also make life difficult for us presenters because we too are judged by the music we play.
“Personally I prefer playing old school music over current compositions because those artistes took time and effort to come up with all-time hits which still appeal to many people today.
“Playing poorly-composed music results in the presenter and station losing listeners.”
Radio Zimbabwe has maintained its reputation of having the biggest listenership in the country supported by vibrant producers and presenters.
“We hope Mubweza keeps up the good work and that one day her name will be read alongside yesteryear greats like John Matinde, Choga Tichatonga Gavhure, Lynet Mawire, Joseph Panganai, Sam Sibanda, Itai Godfrey Muchada and many others who made listening to the radio interesting through their versatility and creativity,” said Muganhu.