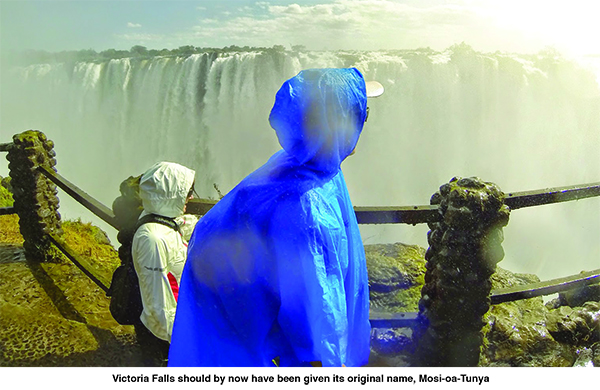 OVER time, several legislations have been introduced to preserve the Victoria Falls and its environs.
In 1934, The Victoria Falls Reserve Preservation Ordinance was established; the Victoria Falls Executive Committee was to be responsible for the preservation of the falls area.
In 1948, the National Monuments Commission established a Victoria Falls Conservancy Committee and extended the protected area downstream to Songwe Gorge.
In 1953, the colonial Governor formed the Victoria Falls Trust, which had responsibility for the area until the National Park was declared on February 25 1972, by Statutory Instrument No.44, when the area came under the jurisdiction of the National Parks and Wildlife Service.
There are six national monuments within the park, including the Victoria Falls, designated as a World Heritage site in 1989.
Notwithstanding the above legislations, the growth of urban populations and infrastructure development in the two towns bordering the Victoria Falls in Zimbabwe and Livingstone in Zambia have been escalating rapidly without adequate, obligatory planning.
Apart from noise and litter pollution, more and more vendors, street urchins, municipal and tourist waste (which includes sewage), are increasingly polluting both the land and waters.
There are reports of upstream water abstraction for agricultural use; reports of local people grazing cattle and cultivating land within protected areas.
Fires are also reported.
Albeit the efforts of the Victoria Falls Anti-Poaching Unit (VFAPU), poaching is another serious ongoing threat compromising the environment, fiscus and our heritage, causing alarm to concerned environmentalists.
Here I should mention reports of frequent and inhumane killings of elephants.
During one incident an elephant was shot repeatedly with an AK47 within 200 metres a chalet complex in Chirundu, in full view of tourists who witnessed the incident.
The invasive plant species lantana camara has lately detrimentally colonised the cliff faces in the gorges where verreauxs’ Black Eagle (Aquila verreauxii) live and breed as do taita falcon, black stork, peregrine falcon and augur buzzard.
The lantana camara is said to be spreading rapidly and aggressively.
There are also vast amounts of the deleterious invasive water hyacinth present; obstructing the waterways above the Victoria Falls.
Unsightly telephone towers are compromising the views and so does the threat of the proposed 196 metre-high Batoka Gorge dam which will necessitate a flow of 175 m3/second of water to operate at full capacity to supply 60MW hydro-electricity, representing a significant proportion of the Zambezi’s total water flow.
The resultant dam would flood several of the gorges in the park area, creating a 50km-long lake destroying the natural surroundings and habitat of cliff-nesting birds.
How and what effect are all these obstructions along the river having on water flows and power generation at Kariba?
The above are just some of the destructive realities facing this unique ‘protected’ heritage site which the Minister of Tourism and Hospitality Industry, Minister of Environment and the Environmental Management Agency, among others, should be addressing.
The Americans, after all, built their casinos in the harsh Nevada Desert to bring life to the desert.
Sol Kerzner also built his fabled Sun City in inhospitable terrain in South Africa to give the area a new lease of life through gambling.
Even Disneyland was built on 160-acres of semi-rural county, near a freeway, not in a natural world heritage site, as intended.
There are ‘inhospitable’ places in Zimbabwe for Minister Walter Mzembi and his partners to erect his theme/amusement park/zoo; would it not help to bring employment and development in another area?
Would the money not be better invested to boost electricity production at Kariba?
Infrastructure development has to be carefully considered and planned. Feasibility studies should be undertaken to establish human and animal interaction and their future co-habitation and relationships.
Zimbabwe needs enlightened patrimony of our God-given land before one embarks on puerile, unnecessary and destructive ventures.
Victoria Falls should have by now have been given its original name, Mosi-oa-Tunya; which is already plagued by indiscriminate litter.
There are laws that protect heritage sites.
Zimbabwe could lose this world-honoured status; which was already threatened in 2007, when the United Nations agency found ‘mismanagement and overdevelopment’.
There are already numerous hotels, restaurants, visitor centres, camps, lodges, private holiday homes, boat moorings and other tourism facilities already established at Victoria Falls.
In 2010, our Heritage status was again threatened following the unlawful construction of a restaurant and curio shop in the rainforest, which not surprisingly, sparked strident protests from patriotic Zimbabwean environmentalists.
Existing legislation governing such sites are specifically meant to limit and prevent undesirable, unnecessary and unwelcome new developments taking place and to check visitors from overstaying and congesting the area. Notwithstanding there have been ceaseless infrastructure developments and further developments have already been considered.
Is Minister Mzembi aware of these legislations?
The management and use of inherited natural areas, its flora and fauna may conceivably generate ethical disagreements and dilemmas in which national and human needs, preferences, interests and values are conflicting.
The paramount concern for all parties, however, should include the preservation and conservation of all fauna and flora, the value of the bio-diversity and eco-systems which should be essential components of any decisions.
Careful debate should underpin decisions on whether increased human involvement in natural areas is desirable and what (if any), constitutes ‘good’ or ‘bad’ human interventions in relation to our bio-diversity.
Thomas Mapfumo, Stella Chiweshe and Mbira Dzenharira are among the many Zimbabwean musicians whose songs extol the importance of animals and the eco-system, reminding us to protect, preserve and safeguard our God-given environment.
Animals have rights; where are they to go if we keep encroaching on their spaces?
It is essential for Minister Mzembi and others to contribute to the preservation and conservation of our natural resources.
Zoos, theme or amusement parks are becoming obsolete because tourists today are looking more and more for ‘eco-tourism’.
The Victoria Falls are one of the world’s natural wonders – let us keep it that way!
Dr Michelina Rudo Andreucci is a Zimbabwean-Italian Researcher, Industrial Design Consultant and Specialist Tourism and Hospitality Interior Decorator. She is a published author in her field.
For views and comments, email: linamanucci@gmail.com