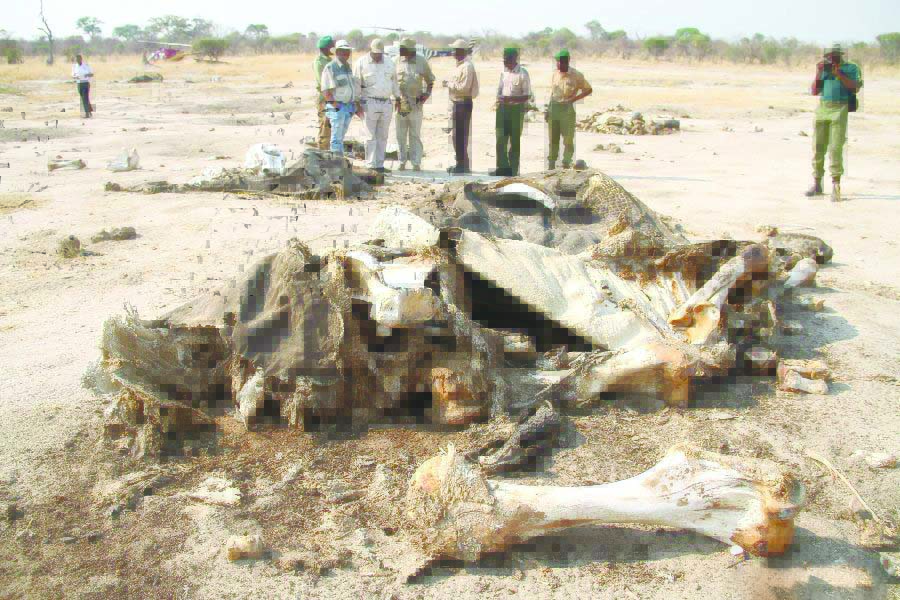 IN a move aimed at conserving and preserving the heritage of Zimbabwe, President Robert Mugabe has called for transparency and accountability in the operations of the country’s wildlife conservancies.
This call follows a spate of cases that have been awash in the media of various animals including endangered species that are being poached.
It also follows the massacre of 109 elephants which were poisoned with cyanide at Hwange National Park.
Ivory has a huge market in Asia where it is believed to have medicinal and aphrodisiac qualities.
Countries with a wide wildlife base therefore are under threat from the Asian countries which are ready consumers of such products.
It is unfortunate that some big wigs are allegedly involved in the illegal trade of ivory as the product attracts a lot of money.
Over the years, many local people and foreigners have been tried and convicted for illegal possession of ivory.
Following lobbying from various pressure groups, the judiciary has of late become tougher on wildlife offenders by passing longer jail sentences.
Speaking during a Politburo meeting last Thursday in Harare, President Mugabe tasked the new Minister of Environment, Water and Climate, Saviour Kasukuwere to expose any illegal activities within the sector.
President Mugabe called for an accounting system that indicated how much money is being generated from the wildlife sector and how it is being accounted for.
He also indicated the need to do away with the system in which the Minister is privy to the tender processes and stressed the need for indigenous people to be able to participate and benefit from their God-given resources.
According to former Minister of Environment, Francis Nhema, the current scenario allows the Minister to be privy to a tender process that awards hunting licences.
“The provincial heads have participated in most of the allocation of concessions,” said Nhema.
“We called all governors to what was called the Governors’ Meeting and that is where we discussed from each province issues of plantations and issues of concessions.
“Then we came up with committees headed by governors and also comprising of provincial administrators and district administrators to oversee the issues.”
Meanwhile, the acting chairperson of the Wildlife Ecological Trust Fund, Major Mahlangu, says a fundraising dinner scheduled for this week is expected to help ward off some of the challenges facing the Parks and Wildlife Management Authority.
Mahlangu said evidence points towards Parks and Wildlife Management Authority requiring over US$5 million for training of rangers, transport and communication and the welfare of the Parks among other things.
The fundraising dinner whose main aim is to mobilise funds for the conservation of wildlife following the killing of 109 elephants in Hwange National Park has three main categories which are elephant sponsors, rhino sponsors and lion sponsors.
The Wildlife Ecological Trust Fund is set to use the SMS platform where all Zimbabweans throughout the country can join hands to support wildlife conservation.
An eight-member team was recently appointed to spearhead the mobilisation of funds for Hwange National Park.
The board comprises of Econet Wireless marketing director, Isaiah Nyangari, ZIMOCO chief executive, Bob Crossley, Major Mahlangu from Mbada Diamonds, Dumisani Mthombeni of Venturas and Samkange Legal Practitioners, Environment Africa executive director, Charlene Hewatt, Steward Bank chief executive officer, Kwanele Ngwenya, Clive Stockhill from Save Valley Conservancy and Phibion Gwatidzo the managing partner of Baker Tilly and Gwatidzo.
Mbada Diamonds has since handed over five of the 20 anti-poaching Landrovers the mining firm pledged towards the conservation of wildlife at Hwange National park.
The vehicles are expected to go a long way in combating poaching in the Park.
Mbada Diamonds’s chief administration officer, Major Mahlangu said the vehicles valued at US$57 500 each were aimed at making sure that the community is safer.
Econet Wireless, Mbada Diamonds and ZIMOCO donated 11 trucks, vehicle tracking equipment as well as communication equipment to assist the Parks and Wildlife Authority in its wildlife conservation efforts.
Tourism and Hospitality Industry Minister, Cde Walter Mzembi called for greater co-operation and synergies among ministries, the media and the business community to ensure wildlife and biodiversity is preserved for the benefit of future generations.
Kasukuwere on the other hand said his ministry is committed to eradicating poaching in all its forms.