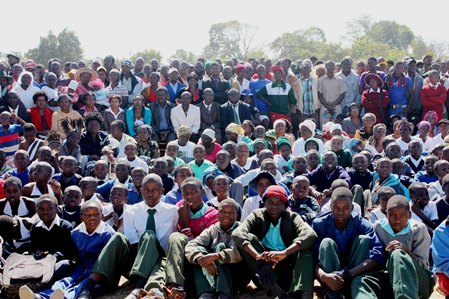 AFRICAN ancestors saw it long ago that no task or project however noble can ever succeed without men and women whose conduct is upright and pleasing to both God and man.
So they developed a humane system of moral and spiritual instructions which has also informed the now so-called major religions of the world such as Islam and Christianity.
The instructions emphasise truth, justice and righteousness as the foundations of unity and social and natural order among things in the universe; animate or inanimate, tangible or intangible, visible or invisible to the human eye.
For according to African ancestors as stated by Kunene:
“Our world is not the only one. There are other worlds in the Universe. Some are at the stage of completion, some at the stage of unfolding, and some at the stage of dying.
“Some can be seen by the naked eye. Others can only be felt because they are so far away. All are sacred and have influence on human life both as individuals and society. Man must live in harmony with them.”
Violation of any of the principles of unity, harmony, peace and coexistence among things in the universe brings forth chaos, disorder and conflict among people in society and also nature, which the learned in their reductive discourse call the environment.
The principles of harmony and order in life and the universe are called Declarations of Ma’at in African classical discourse.
We would call them the principles of hunhu in Shona.
They can be found in: by Maulana Karenga.
The following principles have been sourced from the Ma’at Posters by Gabriel Bandele and Bill Joyner.
They read as follows:
The 42 Principles of Ma’at
I have not done iniquity (committed sin)
I have not stolen
I have not stolen anyone’s land
I have not stolen food
I have not wasted food
I have not taken food from a child
I have not committed sin against my own purity
I have not done violence
I have not done murder or bid anyone to slay on my behalf
I have not worked evil
I have not worked grief
I have not worked treason
I have not made anyone to suffer pain
I have not caused anyone to shed tears
I have not stirred up strife or caused terror
I have not lusted for or seduced any man’s wife or husband
I have not committed fornication or lain with others of my same sex
I have not polluted the earth
I have not polluted the water
I have not polluted myself
I have not envied or craved for that which belongs to another
I have not robbed with violence
I have not robbed or disrespected the deceased
I have not robbed God
I have not swindled offerings
I have not laid waste to the land
I have not done that which is abominable
I have not cursed
I have not cursed God
I have not vexed God
I have not spoken lies
I have not multiplied my words exceedingly
I have not spoken scornfully or behaved with arrogance
I have not acted deceitfully or guilefully
I have not acted with insolence
I have not avenged myself or burned with rage
I have not judged hastily or falsely accused anyone
I have not been angry or wrathful without a just cause
I have not closed my ears to the words of right and truth
I have not been an eavesdropper
I have not overstepped my boundaries of concern or put myself on a pedestal
I have not evilly slaughtered the animals
It is from the above principles that African ancestors derived sacred relationships among themselves and with others, animals and the entire cosmos we live in.
Our inner and outer worlds must be kept in balance.
It is through the daily practice of these principles that we can indeed achieve the tasks and goals we set for ourselves in life, such as the Zimbabwe Agenda for Sustainable Socio-Economic Transformation (Zim-ASSET).
By practising the principles of hunhu and oneness among us and our natural environment as pleases both God and man, social and individual rewards can be realised right here on earth, because the right spirit, right mind, right emotion and right word, brings forth the right action, and from right action a just reward is received.
As above, so below, we reap what we sow, says Bandele on his poster: 42 Declarations of Ma’at.