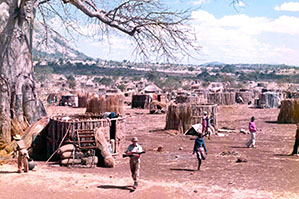 THREE weeks ago, we went to Buhera to reconstruct the story of Assembly Points. There was a big one at Dzapasi.
Last Friday, we went to Chiweshe to reconstruct the story of the Protected Villages(PVs). The first one was built at the northern end of Chiweshe, at Bare in July 1974.
Chiweshe communal area is a thin strip of land, stretching over 100km from Glendale in the south to Centenary in the north.
It is sandwiched between commercial farming area with Bindura/Matepatepa farms to the east, Concession/Mvurwi farms to the west, Centenary/Mt Darwin farms to the north and Mazowe farms to the south.
Its widest point, around Nzvimbo Growth Point, is about 20km from farms on the eastern side in Bindura and those on the west in Mvurwi.
Chiweshe is of historical significance to the story of Zimbabwe.
Mbuya Nehanda lived and belonged there.
Mazoe Valley witnessed one of the bloodiest fighting against white rule during the First Chimurenga.
In the Mazoe Valley alone, dozens of white settlers and miners were killed in ferocious fire-fights around Alice Mine and on the wagon trail to Fort Salisbury.
By the settlers’ own admission, the surrender of the ‘witch Nyanda’ in October 1897 marked the end of the war.
And in the Second Chimurenga, the attack that opened the north-eastern front happened at Altena Farm in December 1972 on the northern edge of Chiweshe.
The first Protected Villages, those atrocious places where villagers were herded to isolate them from the guerillas, were built in Chiweshe.
Chiweshe is significant.
I travel along the road that runs through Chiweshe frequently to my piece of land in Centenary.
At Gweshe Growth Point, 20km from Glendale, almost everyone (who is sick) seems to be going to Howard Hospital, a short distance to the west.
In their write-up why they constructed Protected Villages, the Rhodesians strangely claimed they built them in Chiweshe to save Howard Secondary School and Hospital from closure.
Behind Gweshe Growth Point is the late poet and novelist, Solomon Mutsvairo’s legendary Nyota Mountain.
There is something mystical about it and Mutsvairo captures it in his epic poem, ‘Nehanda Nyakasikana’ that the late VP, Simon Muzenda loved to recite at political rallies.
I can see his tense face as he recited the poem before mesmerised crowds on the political trail.
It was a prayer to the departed for our freedom.
But Nehanda had said it clearly before they hanged her: ‘My bones shall rise!’.
Solomon Mutsvairo lived at the foot of the mountain.
And then there is the Gonhi Mountain behind Nzvimbo Growth Point where Jack Chamunorwa and his section of guerillas perished at the start of the war.
Chamunorwa’s section of eight was the first to operate in Chiweshe in February of 1973.
And as with all things new, mistakes were made and there was an ambush where the section was almost entirely wiped out.
At Bare last Friday, the villagers remembered the sound of gunfire at the foot of the Gonhi Mountain that day as if it happened yesterday. They had horrible memories of the seven bodies of the dead guerillas lined up on the football field at Bare school because they had been rounded up from the villages to come and see them.
The sight of Gonhi Mountain and what happened to Chamunorwa and his section always brings back my own memories of the war, especially the monster called ‘ambush’.
The funny thing about an ambush was that each time you walked into one, there was always that fraction of a second before the first shot was fired that you knew you had walked into one and you instinctively threw yourself to the ground.
It was more than just imagination; perhaps that was how we survived.
And on the western edge of Chiweshe, stretching for more than 30km from Muswewenhede to Gurungwe Gorge turn-off are the Forrester Estates.
Thirty Kilometres! To imagine this endless stretch of land lying alongside people eking a living out of less than an acre of land!
Nehanda Nyakasikana, Kunozova rinhi isu vanyai tichitambura? vaMuzenda’s voice echoed over the mountains and plains. Nehanda turned in her grave.
Towards the northern end of Chiweshe is Bare close to Jingamvura Mountains, the location of Keep One, the first Protected Village in the country, built very close to the road.
The ruins are still visible, so are the concrete water reservoirs on top of a hill.
The tanks, staring into the sky, are graphic and painful reminders of how more than 100 000 people were driven into such enclosures called Protected Villages in Chiweshe to cut any contact between them and the guerillas.
A villager, Mukodzongi, remembers how after the Lancaster House conference the guerillas flooded into the Protected Village firing their guns into the air singing:
Vana amai farai vana venyu tadzoka
Takatumwa nevabereki
Vana baba farai hondo iya yapera
Takatumwa nevabereki
If the idea of creating Protected Villages was to isolate guerillas from the villagers, it failed.