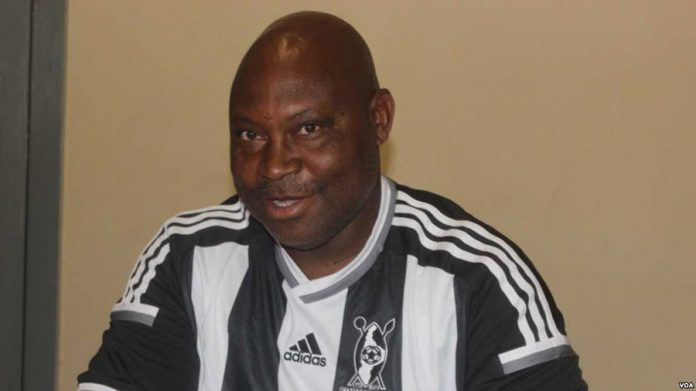 THE 2018 Castle Lager Premier Soccer League opened with drama; a middle-aged debutant and two teams waiting to clash, but in different towns.
The two league teams to battle in the season opener were at two different venues 350km apart.
ZPC Kariba were in the resort town of Kariba while FC Platinum were raring to start their title defence at the National Sports Stadium, Harare.
The whole spectacle was a display of lack of seriousness.
The league, scheduled for March 10, could not kick off after How Mine withdrew from the games, forcing the alteration of all fixtures.
Harare City were given the franchise.
The Maglas, Sakubva, Ascot and Nyamhunga stadia could not comply with the minimum set standards of the PSL club licensing.
Thus, Shabanie Mine, returnees Mutare City Rovers, Chapungu, Nichrut (Ascot) and ZPC Kariba will have to use alternative home grounds.
Last Saturday, the match day, Nyamhunga Stadium was homologated (express agreement with/ or approval of) to host PSL matches by the First Instance Body (FIB). However, communication had already been made that the NSS be used as home by the power utility side.
FC Platinum travelled to Harare in anticipation of the match against ZPC Kariba to find only match officials at the venue.
Probably the match will be given to FC Platinum with the usual bonus three goals as the fixture had already been communicated but the power utility side decided to stay put in Kariba.
Apart from the drama, match day one produced mixed fortunes for the 16 teams that kicked the ball.
Dynamos found Joey Antipas’ Chicken Inn too tough as an Obey Tarumbwa strike sunk the visitors at Barbourfields Stadium in Bulawayo.
It was Antipas’ first league match since his return from SA.
Antipas guided the Gamecocks to their maiden title in 2015 before he joined the great trek down south.
The first game has made Antipas’ intentions clear — he means business.
The former Motor Action mentor is one of the country’s most respected coaches. With two titles under his belt, Antipas would want another title.
It appears Dynamos will maintain their tradition of a slow start as highlighted by their loss in the season opener.
It was a good start for the Highlanders youngsters who got the better of Black Rhinos at BF.
The army side was dismissed 2-1 by Bosso to start their 2018 league campaign on a high note.
CAPS United, on the other hand, faltered when the shared spoils in a goalless affair with returnees Harare City at the NSS.
New boys on the block, Nichrut, made a good start with a victory over Mutare City Rovers at Mandava Stadium in Zvishavane last Saturday. With such a good start, the new boys go into the next match with confidence.
Tendai Chikuni’s Chapungu were on the receiving end against Bulawayo City as the airmen lost 2-0.
Last season, Chapungu did not lose a match in Bulawayo.
The airmen travel to Harare this weekend to face Mutare City Rovers who will be using the NSS as home while waiting for renovations of Sakubva Stadium to be completed.
Ngezi Platinum Stars got off to a flying start when they dismissed debutants Herentals College at Baobab Stadium in Mhondoro-Ngezi.
Walter Mukanga and Keith Murera’s goals ensured the platinum miners two points.
Ngezi pick up from last season where at one stage they were top contenders for the title.
This weekend, Sunday, Ngezi travel to Gibbo for a date with Triangle who lost to Shabanie 1-0 last Sunday at Mandava Stadium.
However, Ngezi have not struggled against Triangle in most matches.
The two sides have met four times. Each team has won once with the other two being draws.
Shabanie Mine will have a real test against Dynamos at Rufaro Stadium in Harare on Sunday before municipal sides Harare City and Bulawayo City lock horns on Saturday at the same venue.
Nichrut will play host to Chicken Inn in their first test of character at Mandava Stadium on Sunday.
Black Rhinos welcome ZPC Kariba to Harare at the NSS tomorrow while Herentals entertain Highlanders at the same venue on Sunday.
Saturday
Mutare City FC vs Chapungu FC, NSS (1300hrs)
Black Rhinos FC vs ZPC Kariba FC, NSS
Harare City FC vs Bulawayo City FC, Rufaro Stadium
FC Platinum vs Yadah FC, Mandava Stadium
Sunday
Nichrut FC vs Chicken Inn FC, Mandava Stadium
Herentals FC vs Highlanders FC, NSS
Triangle United FC vs Ngezi Platinum FC, Gibbo Stadium
Dynamos FC vs Shabanie Mine FC, Rufaro Stadium
Bulawayo Chiefs FC vs Caps United FC, Luveve Stadium
All other matches kick-off at 1500 hours.