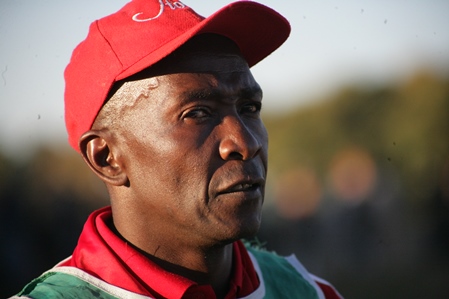 ACTION in the 2014 Castle Larger Premier League (PSL) continues with some exciting fixtures lined up for this weekend.
After a round of mid-week fixtures that produced mixed results for Harare giants Dynamos FC and CAPS United, the two powerhouses face tricky ties in week 10 of the exciting marathon league.
Dynamos who have flattered to deceive this season scored their first goal in five matches when they romped to a controversial victory against the Lloyd Mutasa coached FC Platinum at the National Sports Stadium on Wednesday.
De Mbare beat the platinum miners 1-0 courtesy of a late penalty by left back Ocean Mushure.
It was the first time that Mutasa lost a game to Dynamos since becoming a coach.
The victory came as relief for Dynamos coach Calisto Pasuwa after a three match winless streak.
The Dynamos gaffer had been under pressure from the club’s hard-to-please supporters and some members of the executive who were reportedly ready to wield the axe on the embattled mentor.
On Sunday, Pasuwa squares up against another former De Mbare son when his team makes the long trip to Chiredzi for a date with Moses Chunga’s Chiredzi FC at Chishamiso Stadium.
The match will be screened live on Supersport.
While ‘Bambo’ as Chunga is affectionately known is yet to make his mark in the premiership this season, the outspoken coach is known to rise to the occasion when playing against his former paymasters.
Lying just one place above Harare City, the team anchoring the log, Chiredzi who played Shabanie Mine at Maglas Stadium yesterday, need to spruce up their act if they are entertaining any chances of avoiding relegation at the end of the season.
CAPS United who succumbed to a shock 2 nil defeat against unpredictable How Mine at Luveve Stadium on Wednesday have a date against struggling Bantu Rovers at the National Sports Stadium on Sunday.
The victory against CAPS United propelled How Mine to the top of the log.
On the other hand, the ‘Green Machine’ as CAPS United are known have blown hot and cold this season.
But after their impressive display against arch rivals De Mbare in the Zimbabwe National Army Charities semi final last Sunday, Makepekepe are poised to bag another victory for aset of maximum points against their less fancied Bulawayo opponents.
Bulawayo giants, Highlanders who played struggling Harare City yesterday will travel to the Eastern Highlands for a showdown against Buffaloes at Sakubva Stadium.
It should be an easy ride for last season’s runners-up Highlanders as the Luke Masomere coached Buffaloes have been inconsistent.
Still smarting from a 5-1 mauling by Triangle on Wednesday, Buffaloes have little chance of upsetting a super-charged Bosso that have produced some eye-catching perfomances this season.
Highlanders coach Kevin Kaindu will welcome back star midfielder Kuda Mahachi who is reportedly set to go for trials to French Ligue 1 giants Monaco and rising star Milton Ncube who signed for South African ABSA Premeirship side Ajax Cape Town.
The duo missed the ZNA Charities defeat to FC Platinum over the weekend due to national team commitments.
At the Colliery, a potentially explosive encounter is in the offing when Hwange host Shabanie Mine.
Dubbed the ‘battle of the miners’, the duel between the two teams from the mining community will reignite the sleepy mining town of Hwange.
Hwange garnered an important away point when they drew 1-1 with Chapungu United in Gweru during their mid-week fixture.
Sitting an impressive second in the log, Hwange will look to build from their impressive mid-week outing.
Tomorrow, FC Platinum will look to bounce back from their heart-breaking defeat when they host another Chiredzi outfit, Triangle FC at Mandava Stadium.
The cash-rich platinum side boast a group of talented stars that on their day can rise to the occasion.
After a slow start, FC Platinum have slowly been rising up the ladder until their mid-week nightmare.
Coach Mutasa will look up to the likes of talented left back Qadr Amini, midfielder Thabani Kamusoko, Ali Sadiki and star striker Donald Ngoma to dismantle Triangle.
Another fixture lined up for tomorrow pits surprise package ZPC Kariba who take on How Mine.
This fixture promises to be a nail-bitting affair as both sides have enjoyed a good run of form in recent weeks.
Chicken Inn will take on Chapungu at Ascot Stadium on Sunday in a mid-table clash.
Chicken Inn were thumped 2-1 by Bantu Rovers in a surprise result of the week.
They will however hope to rise from this setback.