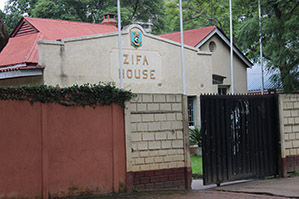 THE much anticipated elections for the Zimbabwe Football Association (ZIFA) presidency that had been challenged in the courts will go ahead this weekend as scheduled.
The term of office of the incumbent Cuthbert Dube comes to an end with fresh elections scheduled for this Saturday.
Four candidates have thrown in their hat into the ring for the top football job in the country.
Nigel Munyati who was in the board for the past four years, Harare City FC chairman Leslie Gwindi, former ZIFA president Trevor Carelse-Juul and Dube clash in this weekend’s polls.
A court interdiction to stop the election was this week, filed by ZPC Kariba official, Saidi Sangula, was thrown out by Justice Francis Bere on Tuesday allowing the poll to go ahead tomorrow.
Former PSMAS chief executive and ZBC board chairman, Dube faces-off with his former board member while Gwindi and Juul are the other candidates hoping to wrestle leadership from Dube.
We take a closer look at the contenders.

Leslie Gwindi
He is outspoken in his criticism.
His bold criticism on the Delta-PSL sponsorship deal saw him face a ban from football – which has since been lifted.
He was cleared to run for the top football post in the country.
However, the Harare City FC chairman believes in reviving the collapsed structures of ZIFA and constitutionalism together embracing ICT in the day-to-day running of football.
He believes in engaging government to underwrite the soaring ZIFA debt so that the new board starts on a fresh footing.
The former PSL executive and Dynamos secretary-general believes in securing a debt from FIFA to fund several football projects like women, five-aside, referees and junior football, among other things.
Gwindi who was beaten by Dube in the 2010 elections hopes to turn the tables around this time.
With the stage having been set for the landmark elections for the next ZIFA president for the coming four years, the election might spill into the courts as always the tradition.

Nigel Munyati
Although rumours of vote-buying have started circulating, Munyati is the candidate with equally a huge following making it a two horse race between him and Dube.
Munyati who has been in the ZIFA board and involved in football administration at various levels, has seen it all in the game and is fighting Dube from within.
He is a firm favourite,but lack of financial muscle, compared to other contenders, might let him down.
His strategy is mainly based on planning, the lack of it he says, is the major problem with Zimbabwe football.
Having seen it all in the governing of the sport, Munyati is involved in youth development of the sport.
He is involved in the ACES Youth Soccer Academy which has produced several prolific players in the country.
Munyati castigated the Asiagate scandal that he said the country wasted time and money on, among other things.
He is an example of a successful sports administrator with potential of beating his former football boss.
Good Luck Mr Munyati!

Trevor Carelse-Juul
The man has been in football administration before and has a decorated resume.
However, his calling from God (as he claims) to deliver football might not appeal to the electorate.
His trump card is the yesteryear glory of the famous ‘Dream Team’ that never qualified for any tournament, but made the game popular. He was the incumbent ZIFA president during the time and disappeared after the end of his term.
Juul had been forgotten in football circles and his comeback might be difficult. He is overshadowed by Dube and Munyati.
Cuthbert Dube
He is the man who has hogged the limelight for the wrong reasons over the past two months and is alleged not to have ever set foot at number 53 Livingstone Avenue, the ZIFA headquarters during his tenure as president.
Dube is now seen as an example of bad corporate governance, in spite of his big resume in football.
From the days at Buymore Social Football Club back in 1989, he has been involved in the game for decades.
He chaired the First Division (Eastern Region) and sat on the ZIFA board from 2001 to 2006.
He was elected ZIFA president in 2010.
He is faced with massive criticism for not delivering.
However, Dube has been bankrolling the beleaguered soccer governing body from his ‘deep’ pockets which has made him a darling of many.
In fact, he gave the association soft loans for national team trips.
Some claim he was paying the ZIFA workers from his pocket.
During his tenure, the Asiagate scandal almost brought the game on its knees.
The Asiagate scandal affected the national team’s performance in Africa.
Six coaches were appointed during his tenure.
Due to the match-fixing scandal, the team failed to qualify for the 2012 AFCON as coach Norman Mapeza was fired at a crucial time for refusing to be bribed in a CECAFA tournament played years back.
The Asiagate has been blamed for lack of direction, lack of evidence and remains the incumbent’s worst football mistake that brought the game on its knees.
Dube nowadays nicknamed ‘Cashbert’ has potential of winning the polls as he is ‘popular’ in the provinces.