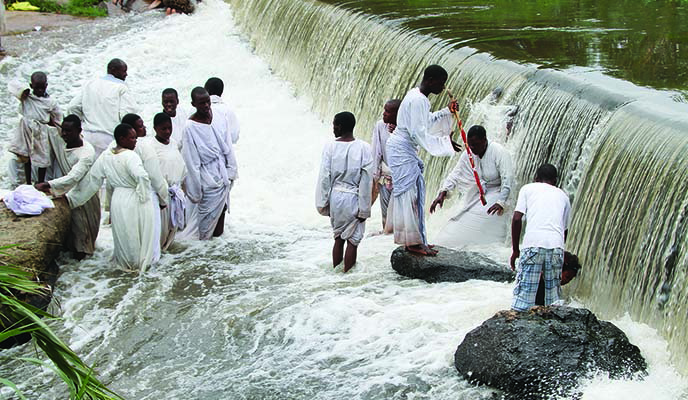 A LOCAL weekly recently carried a story that inadvertently poked holes into the common narrative on ‘original inhabitants, whites, our spirituality and the land reform’.
The following extract is particularly instructive;
“Spirit mediums and traditional leaders yesterday led a cleansing ceremony at Lesbury farm in Rusape as Robert Smart and his family made a grand return to the farm over six months after they were evicted to pave way for a top cleric.
Hundreds of people, among them local villagers, war veterans, soldiers, ZANU PF officials and former workers witnessed the cleansing of the farm which was reportedly defiled by invaders.
The Mafuwe drumbeat could be heard from a distant over the hills with popular spirit medium Tenzi Nehoreka commanding several groups of other spirit mediums drawn from the country’s 10 provinces.
Smart (71) and his family were evicted from the productive farm outside Rusape by former president Robert Mugabe’s allies in June last year to make way for Bishop Trevor Manhanga.”
The story went further, boldly claiming: “Chief Tandi said the ceremony was meant to cleanse the land allegedly defiled by Manhanga who also built a church at the farm near the graves of the area’s first inhabitants.”
The issue of original inhabitants took me to an incident over 25 years ago at a farm in Nyamandhlovu.
I was looking for archaeological sites in what was then a very white commercial farming district.
At one farm, after explaining my mission, I was politely told that the oldest evidence of human occupation on the farm was an early 20th Century dip tank that my host’s grandfather had built. The romantic concept of whites in virgin lands was very much alive.
The available knowledge on our pre-history tells us that most parts of this country had probably been inhabitated in one way or another by the First Millennium AD.
As for desecration; it’s an issue that custodians of our culture have had to accept and live with.
My maternal uncles once recounted to me a sad story of cultural exclusion suffered by the Nhohwe people in the colonial and post-colonial period.
They had just been to the Bokoto Hills on a fact finding mission.
Reports had been received that Christian church groups, conventional and masowe, were desecrating the place through night vigils on the hills and sacred places of Bokoto.
He rhetorically asked me whether it would be right for the Nhohwe to have the mbende ceremony at a particular sect’s sowe/kirawa or in a cathedral without permission.
He shuddered to imagine the possibility of sowe goers having bathed in Nhohwe sacred pool, dziva raNyamita on the Bokoto Hills.
My uncles later sought my advice on whether there was legislation that promotes and protects African Traditional Religion (ATR).
They had already compiled a dossier on how their Bokoto ancestral lands had been desecrated by mainly Christian congregations.
I wished them well in their proposed meeting with the District Administrator.
With regards to cleansing ceremonies to undo desecration of ancestral sacred places, there had been a few local initiatives. There had been reports of one such effort by Mbuya Hungwe in the Mazowe area.
Mbuya Hungwe’s group had been on a campaign to cleanse ATR sacred places of masowe desecration.
They were going about destroying invasive masowe/nguwo tsvuku shrines and levying monetary fines on those behind the desecration.
The campaign was apparently triggered by the unrestrained use of red cloths by these masowe sects.
Red, as a colour, sits uneasily in Shona cosmology.
And red includes shades like brown, purple, pink and orange.
And finally, whites represent troubling privilege.
This includes positive stereotyping around beauty, as in the legendary mermaid; wealth, as in born boss and superior culture and spirituality.
Therein lay my discomfort with Shona term for whites; murungu.
My discomfort is historically informed, not least by the infuriating remark of Goncalo da Silveira: “This is best shown by the Portuguese who are there among them when they tell us that the kaffirs look upon them as gods and ask them for water and sun.”
Mulungu (also spelt murungu, mlungu, and in other variants, is a common name for the Creator among the Bantu peoples of East and Central Africa.
This includes the Chewa, Nyamwezi, Shamba, Kamba, Sukuma, Rufiji, Turu and Kikuyu cultures.
Chewa is among Zimbabwe’s national languages and is widely spoken among farm and mine labourer communities.
Today, the name ‘Mulungu’ is also often used to refer to the Christian or Islamic God.
The Swahili word for God, ‘Mungu’, is a contraction of the original form ‘Mulungu’, which still appears in Swahili manuscripts of the 18th Century.
So clearly, a gathering in which our colleague the whiteman is centre of attraction as we invoke our spirits to intercede between us and God over desecration of our lands sits uneasily with reference to historic race relations between black and white.
Many traditional religious shrines have been desecrated and appropriated in the manifestation of these race relations.
Many such shrines, including Bokoto of the Nhohwe, wait for national cleansing.
I doubt though that the ceremony at Mr Smart’s farm represents the beginning of this overdue national effort.