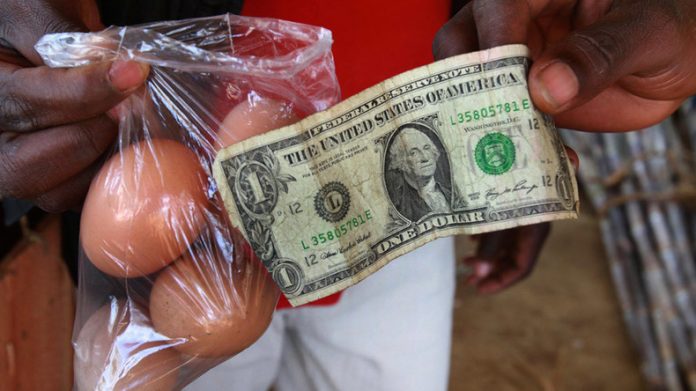 WHEN businesses openly demand payment in US dollars against the law which requires citizens to use the local currency, it means the tail (criminal elements) is wagging the dog (Government).

It also means the ‘free funds’ are in fact acquired by force!

Caught between a rock and a hard place, Zimbabweans will go all out to seek and acquire the US dollar by hook or by crook so that they can pay for ordinary locally produced goods which enjoy unbelievably huge US dollar discounts.

The forex funds are not ‘free’ unless the official position becomes: Each man/woman for self and the devil take the rest!

We now have a situation where every citizen uses any means at his/her disposal to acquire ‘free funds’ or US dollars.

Criminals are targeting those businesses known to collect and hoard large amounts of foreign currency.

With the armed robbers, who now include machete gangs, gold was initially targeted.

But subsequently, as possession and hoarding of ‘free funds’  has become one, the liberties enjoyed by Zimbabweans, the targets of criminals, have shifted to include any individuals or businesses that collect or are known to be in possession of foreign currency.

In most countries where plastic money is widely used, pick-pocketing and robbery crimes are insignificant as the criminals know that they are likely to encounter, not wads of cash, but bank cards whose pin codes they cannot easily decipher.

The shortage of forex seems to have literally dislocated local authorities’ capacity to enforce the rule of law with regards to currency issues.

Today, it is only local currency that is legal tender for purchases; tomorrow oh, those with free funds (foreign exchange) can use them for purchases!

Of course, the COVID 19 pandemic has not helped matters.

But overall, where are we headed?

The above situation may partly explain why the citizenry have all literally fled to seek refuge in the shadow of the seemingly impregnable US dollar.

Even then, only a tiny fraction of Zimbabweans have access to foreign currency.

We wish to highlight the plight of millions of Zimbabweans who are resident across the length and breadth of this beautiful country. The overwhelming majority live in rural communities where the closest thing to a bank is probably a post office.

They derive their incomes from marketing mostly agricultural products through both private and Government-controlled parastatal companies.

While many rural folk may recognise a US dollar note, the majority have not had the ‘pleasure’ of pocketing this rare piece of printed paper.

Where and how would a villager obtain a US dollar?

They cannot receive it from COTTCO when they sell their cotton, neither does the Grain Marketing Board dispense US dollars for grain and soyabeans delivered to its silos.

Honde Valley and Mutoko farmers delivering bananas and tomatoes to Mbare Musika respectively get paid in local currency. Their customers are people employed in both public and private sector enterprises that trade and settle their financial obligations, the legal way, in local Zimbabwean currency.

Farmers selling their livestock are paid in local currency, although  some now demand payment in US dollars.

The businessman who runs a grinding mill, a grocery store, butchery or beerhall all receive payment for goods and services from their clients in the local currency.

The only partial exceptions to the above scenario are tobacco farmers and small-scale gold miners whose produce is sold in foreign currency, a percentage of which is paid as hard currency to the producers.

But if all the above categories start demanding services to be paid in forex so they can also accumulate free funds, what kind of economy will we be left with?

I have outlined the somewhat obvious scenario to emphasise that very little, if any, foreign currency is used as a medium of exchange for goods and services in Zimbabwe.

The bulk is hoarded and externalised.

We hasten to point out that every country has its own local currency which local citizens use for all financial transactions.

No country can use a reserve currency like the US dollar permanently.

It will be too expensive to pay for things within the country.

So Zimbabwe is probably the only country trying to do the impossible to use a reserve currency for local transactions.

Let us use a home-based explanation of what money is.

If I sweat while making a certain object, for example, a tool, and you want to get the tool from me (buy), you must give me an item or object whose value equates to my ‘sweat’.

From ancient times, people used to give objects considered to be valuable to pay for goods or other people’s sweat (services).

In Zimbabwe, a hoe made of iron was very expensive and was used to pay ‘roora’, the bride price for a wife.

Gold, precious stones and even sea shells were used as ‘money’ to exchange value.

That was the basis for what we now call money.

In many cases barter trade was practiced.

People exchanged objects where they agreed that the values of the objects matched.

For example, gold was exchanged by our ancestors for cloths and beads for example.