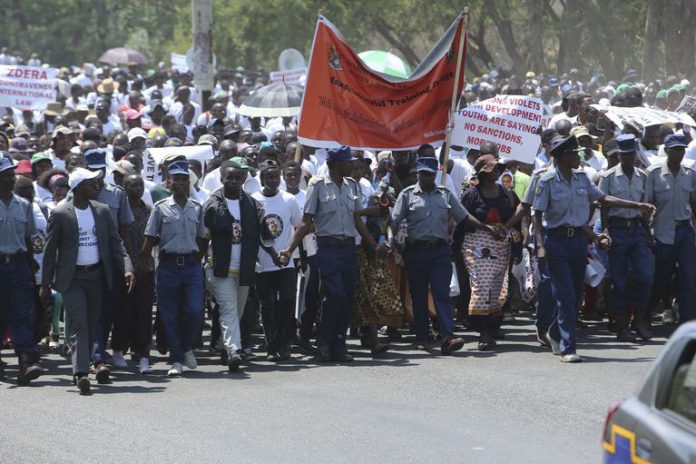 AS festivities for the National Anti-Sanctions Day came to an end on Friday last week, an observation was made to this writer by a troubled colleague, who noted that: “Zimbabwe is now a nation of two halves.”

There was a palpable air of resignation in both his voice and eyes; fear of what we have always known but have been perhaps afraid to say to each other — that through the sanctions, the West has successfully managed to divide this nation.

As expected, the MDC Alliance which was harping away on social media, lost to that compelling fact.

They have been lost on many things to do with national development.

Almost everyone had spent the week describing how the economy has been the biggest casualty of the Western-sponsored sanctions.

They were all spot on in their observations.

We all dusted ourselves on October 25 2019, shaking off the excruciating pain that has become a permanent feature of our lives since December 21 2001 and February 18 2002, when that fatal blow was delivered to us by the US and EU in that order.

Off we went to the respective points where the message was to be delivered to the West that enough is enough.

It was a matter of life and death.

It will remain like that for some time to come.

Slowly, slowly the masses gathered, sweating in the blazing heat that has visited upon Southern Africa in the past few days like a mad demon.

Yet the demon was there somewhere in Harare; furiously typing on social media, lampooning Zimbabweans for their spirited fight against the sanctions.

The Americans started to speak in tongues even!

A certain message from a gathering that they had viciously sought to denounce as a non-event had hit home.

We were told in Shona and isiNdebele about what the sanctions are about and the purpose they are supposedly serving.

What a spectacle — Americans writing in our own languages!

But it has been always a fact that the Americans are masters of deception. In the US, there are many university colleges that teach Shona as a language to Americans

What probably came to us late was that they could hire a few, hopelessly out of sorts Zimbabweans to demonise their country.

It did not take long for us to realise the source of those turncoats.

Feeling left out, shocked by the thousands that turned up for the march across the country against the sanctions, MDC Alliance leader Nelson Chamisa joined the twitting bandwagon and claimed that the embargo was not affecting the country.

With that, two Zimbabwes had emerged.

But the damage has been done especially for Chamisa and his party.

ZANU PF will emerge stronger from this; it will be emboldened by the renewed fight against the US and it will continue to wallop the MDC in future election.

The ruling Party’s majority will be summoned to deliver their might on the hapless MDC Alliance.

Several measures that will forever determine this country’s political future will be made in the near future.

This writer anticipates a ‘Logan-like Act’ here in Zimbabwe.

That is the beauty of political naivety.

It always comes back to haunt its host

And the MDC Alliance has all but sealed its fate.

Back to serious issues, if the West missed the October 25 2019 message, which they did, then they will certainly rue that opportunity.

“On  August 18 2019, the SADC Heads of State and Government, meeting in Dar es Salaam, Tanzania, took a bold and historic decision to declare October 25 as the day on which the entire SADC region would collectively voice its disapproval and condemnation of the illegal sanctions imposed on our country, Zimbabwe.

The unjustified and oppressive illegal sanctions continue to cause untold suffering to the ordinary people of our great country.

Their direct and indirect debilitating impacts have equally been felt by our neighbours. Today, we arise and collectively say enough is enough. The illegal sanctions are an albatross to the development, well-being and prosperity of the people of Zimbabwe.

The dispossession of our land was one of the primary grievances which led us to wage the protracted liberation struggle for our country.

Ours was a fight to reunite the land with its people and the people with their land, which promise we fulfilled during the land reform exercise. However, this had dire consequences and led to the imposition of the illegal and unjustifiable sanctions by the European Union and the USA.

Furthermore, ZDERA has blocked Zimbabwe’s access to international credit markets, leading to the drying up of traditional sources of external finance.

For nearly 20 years, we have lived under the unbearable weight of these illegal sanctions. Their impact on our daily lives is immeasurable and the consequences are dire. We know very well that the sanctions are neither ‘smart’ nor ‘targeted’. For example, two agricultural and infrastructural development banks were placed under sanctions, which saw them losing millions, in lines of credit and reputational damage.

State-owned companies and their subsidiary companies in the fertiliser industry also had their accounts frozen. Millions belonging to another chemical manufacturing company were also intercepted. Another State-owned company responsible for marketing the country’s minerals lost revenue in similar circumstances. The list is indeed endless.”