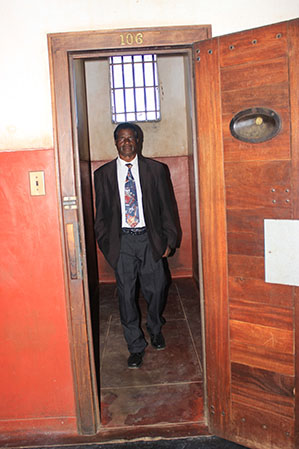 KHAMI Prison just outside Bulawayo, which housed nationalists and freedom fighters, was a place designed to break even the toughest guerrilla prisoners.
Prisoners that survived Khami including Cde Martin Mwale recall a time so merciless that they count themselves lucky to have made it out alive.
In October 1971, Martin Mwale had been convicted of recruiting people and undergoing terrorist training in Zambia and sentenced to 20 years with hard labour.
Just 24 hours spent in the prison would dispel hope of coming out alive.
The unfortunate ones brought to the prison for one charge or another trumped up charges, never thought they would make it out alive.
Many were the things that could snuff out a life in the prison.
If starvation and deprivation did not get you then injuries from torture by the wardens and bites from dogs that were racist as their masters could do the job
Cde Mwale remembers tiny solitary confinement cells that could play havoc even on the toughest tried and tested guerrilla.
“In the tiny cell one experienced both physical and psychological torture at the same time,” he said.
One, he said, could find himself in solitary confinement just for not being well groomed.
He will never forget more than 20 prisoners sharing a single shaving machine.
“It was typical for 30 prisoners, under an allotted time usually a very short period, to share a single shaving machine,” Cde Mwale said.
Contracting diseases was the least of their worries, but getting the job done for being unshaven attracted punishment that made contracting any disease inconsequential.
The prison routine, he said, was meant to humiliate and break the spirit.
“The day began with an inspection at 6 am and then prisoners would be served with sour porridge and coffee manufactured from roasted maize grain ground into powder,” said Cde Mwale.
“After breakfast all prisoners would go to the pits to crush stones.
“Each prisoner would be equipped with a small hammer, weighing about a kilogramme and one large stone to crush smaller stones into concrete size ones.
The prisoners crushed stones in silence.
“Only the sound of hammers and breaking stone would be heard,” he said
An average of three guards with vicious dogs would stand guard and when they felt like it, let loose the dogs on the prisoners.
“Injuring the dogs in self-defence would result in very harsh punishment that included merciless beating and being sent to the dark cells.”
During the summer season, the pits became monsters with sharper teeth.
“From September to December the pits would be as hot as boiling pots, the skin during this period was seriously damaged,” he said.
Cde Mwale described the dark cells as brutal to the psyche.
“They were small compartments which when closed would not allow even a single ray of light, making it a compartment of total darkness,” he said.
“It had a spy hole through which the wardens checked if the prisoner was still alive.
“The cell would be filled with water to make sitting impossible and a prisoner was only fed once a day with a small golf ball like morsel of sadza forced through a spy hole into his mouth and there was no water to drink.”
Cde Mwale recalls that there was no proper health care for prisoners, resulting in many dying from ailments that could be easily treated.
Prisoners, he said, barely communicated with relatives and friends. A prisoner was allowed to write one letter per year and it was not supposed to highlight the cruelties endured.
A prisoner of war was allowed one visitor per year.
Cde Mwale said prisoners were allowed to receive different groceries such as drinks, biscuits, sweets, cooked and roasted meat, tinned foods during Christmas and New year holidays.
But after the New Year’s holiday, all groceries in cells was collected.
The collected food would be cooked in one pot, the fruits, biscuits and meat was mixed and prisoners were forced to eat the horrible meal.
Life dramatically changed on commencement of Lancaster House talks.
Stone crushing was stopped and radio speakers were fixed on the wall in the open yard while prisoners were allowed to play volleyball, chess, draft and judo.