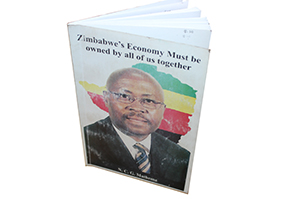 Zimbabwe’s Economy
Must be owned by all
of us together
By Cain Mathema
Published by TEPP Marketing, Publishers and Distributors
ISBN: 0-7974-2167-X

THE Zimbabwean Government has been under attack from the West since it rolled out the Land Reform and Indigenisation and Economic Empowerment programmes with the aim of empowering the indigenes.
Spirited efforts, particularly by the West and its allies including the US to ensure the programmes do not achieve the desired results have all hit a brick-wall.
In his book, Zimbabwe’s Economy must be owned by all of us together, Minister of State for Provincial Affairs, (Matabeleland North), Cain Mathema advocates the participation of all Zimbabweans in economic growth.
The writer who also penned the book Zimbabwe Diverse, But One, is of the view that everyone should benefit from the resources in the country, something which the Government is working towards achieving through various programmes.
“Together as one,” Mathema suggests Zimbabweans will grow the economy and develop the country.
At a time when most books being published want to divide Zimbabweans and make them feel incapable of driving the economy, the book by Mathema is refreshing.
For long, the West has fanned divisions among Zimbabweans by playing the tribal card between the Shona and Ndebele to derail development.
“We have to live together and promote and support each other as a multi-tribal, multi-racial and multi cultural society,” he writes.
“There is no Zimbabwe without the presence of each of our tribes, races, languages and cultures.
“Therefore, we ought to be a united family all the time inspite of the tribal, religious and racial distinctions that characterise us.”
Mathema castigates Zimbabweans who have fallen in the trap and are being used to advance the Western agenda of dividing people.
“Tribalist and racists are failures in life one way or the other, or they are just agents of Rhodesia or foreign powers.”
Through the use of education systems, Mathema suggests, instilling a culture of oneness and a sense of belonging.
The education system created by the whites was one that ensured that a child after leaving school would work for someone and not own businesses, in other words, to be self-employed.
With the Land Reform Programme, Zimbabweans are now aware that they too can be excellent farmers and suppliers of agro-based products to industries. Previously white commercial farmers dominated the agricultural sector.
The Youth Fund has also helped finance businesses owned by youths giving them an opportunity to contribute to the Gross Domestic Product (GDP).
“Our education and training system is one of the best in Africa,” writes Mathema.
“But we need to now also emphasise more on the education and training of our children to be owners of the economy too, not just for them to be educated so that they become good employees of foreigners who own the economy.”
If schools produce people that are ready to be masters, development will accelerate.
Now that indigenes own the land and mines, there is need for value addition.
Value addition ensures that the country does not export raw materials, but finished products with higher returns and in the process create jobs.
Mathema writes that the West would want developing countries to continue exporting raw materials as they benefit more from such an arrangement.
“That is why the West encourages, if not forcing, us to concentrate on the production of raw materials as was the case during the colonial days,” he writes.
“The West looted their colonies empty, bought cheaply from their colonies, but sold expensively in return to the colonies.
“The colonial economics of plunder was a zero-sum game: Don’t allow your gold or silver to leave your borders to another country, let them come from other countries instead, and the more the better.”
The writer explores the issue of non-governmental organisations (NGOs) that come under the guise of supporting the people yet they have ulterior motives.
With more writers like Mathema whose literature is positive and contributes to nation building, Zimbabweans can learn to believe in themselves and successfully build the economy.