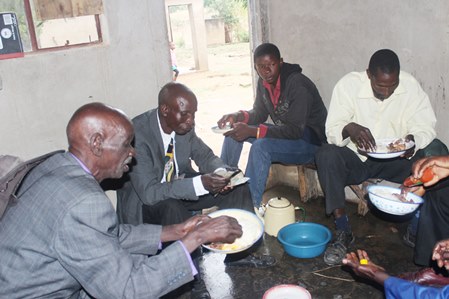 I REMEMBER very well that jenaguru, full moon, night in Unyetu in 1977. It was chirimo and during school holidays, so must have been an August or early September night. Our homestead was hosting ‘ngoma’, the village dance for youths, that night. This was to be the last year ‘ngoma’ was held in the village.
In the years that followed youths joined the liberation war effort and ngoma was absorbed into pungwe. With the end of war, ngoma refused to return to the village and in its place we have masowe or virgils at prophets’ shrines.
On this particular night Manzira was on drums and Diana starting the songs with her usual high pitched melodious voice. From ‘Anotamba naMusvina’ to ‘Handitambe naManuwero’ there was no respite and we reacted with foot thumping dexterities that left our cracked feet, man’a, for worse. The happy night came to a sudden end with the appearance of Patrick, his younger brother Munaro and friend Mukaka. The three had been conspicuous by their absence on this night. They were joined in caucus discussions by Diana and Fairasi, Patrick’s sister. Diana called two other girls and appeared to be sending them with messages to our neighbouring homesteads
Moments later the five left in the direction of Patrick’s homestead and with that departure the ngoma came to a premature end. Not long after the ngoma youths had dispersed we saw back and forth traffic by mostly adult women to and from the western boundary of the Nyakudirwa fields.
My sister later explained to us the following morning that the traffic had to do with Patrick having taken a wife through elopement, “ainge atizisa musikana wake”.
My sister gave us a detailed account of the trouble Patrick’s would-be wife gave Patrick’s family. She had her face covered and was refusing to enter Patrick’s homestead. Patrick’s sisters chided her over her stubbornness, but she remained defiant. After several hours of coaxing, she finally agreed, but not before they parted with several coins. I could see an element of envy in my sister’s eyes as she estimated the coins collected. I was less concerned about the money as I imagined the happiness and authority that had now come Patrick’s way, Patrick no more a boy.
This was kutizisa mukumbo of the 1970s.After successful courtship the two lovebirds would exchange love tokens, usually personal clothing, in front of the girl’s aunt, tete. If they could not marry the usual way, for whatever reason, usually inadequate resources for lobola or premarital pregnancy, they could always arrange for the girl to elope.
In this particular instance, Patrick took this route because he had no lobola cattle. On this night, Patrick, Munaro and Mukaka had gone to meet the girl at a prearranged meeting place in a bush thicket near her homestead. This was several villages from our village.
They walked her, after dusk, helping carry her suitcase, to the village. The scene around entering the homestead we later found out was “kushonongorwa”, a money game for daughters-in-law, varoora.
Today Patrick is still happily married to this ‘stubborn’ girl, but I am still curious to know how he finally managed the lobola process.
In the pre-1970s period the kutiza mukumbo practice was very much the Patrick way. Those planning kutizisa had to be prepared for a thorough beating should they be caught by the girl’s relatives.
The trip was full of stops during which the girl demanded kushonongorwa. After receiving the muroora through kushonongora and kupururudza the man’s relations would immediately arrange for payment of ‘Tsvakirayi ino/kuno’.
This was followed by ‘Matekenya ndebvu’, literally “tickle the beard” meaning let us laugh about this incident and talk it over.
This opened the way for the actual lobola negotiations for which the first payment was ‘kutumbura mafeso’ with reference to the thorny route travelled by the girl.
This was immediately followed by the usual lobola payments. The father of the girl was compelled to be reasonable in his lobola expectations since he no longer had custody of his daughter and his prospective son-in-law was indisposed in terms of lobola resources.Today the practice of kutizisa has changed. It is no longer an arrangement between the boy and the girl. This is now purely a decision and act taken by the girl either because she has fallen pregnant or realises the boy is not the marrying type unless pressured. The girl embarks on the journey alone and literally forces her way into the homestead and house. For the ultimate prize of marriage she will forgo kushonongorwa. For the boy and his relations this is time of anguish as instinctive reaction is to try and chase the girl away.
If the girl can withstand this initial abuse and remain determined to be part of this family, her in-laws will eventually come to their senses and accept her. Then will arrange for kuridza mhere and tsvakirayi ino payments. This will then be followed by payment of damage, mhoya musha, paving the way of normal lobola negotiations.
In many such cases payments stop after tsvakirayi ino and boy and girl live happily as husband and wife. Trouble starts when girl falls seriously ill or dies. In the latter instance truant son-in-law’s family is made to pay lobola for the decease, kuroora guva.For those who have gone through this practice the question to women is; wakatiziswa or wakatizira here? To the men the question is; wakatizisa or wakatizirwa here? For Patrick akatizisa, I was a witness. His family celebrated.
Patrick’s wife got royal treatment and Patrick enjoyed his moment under jenaguru!