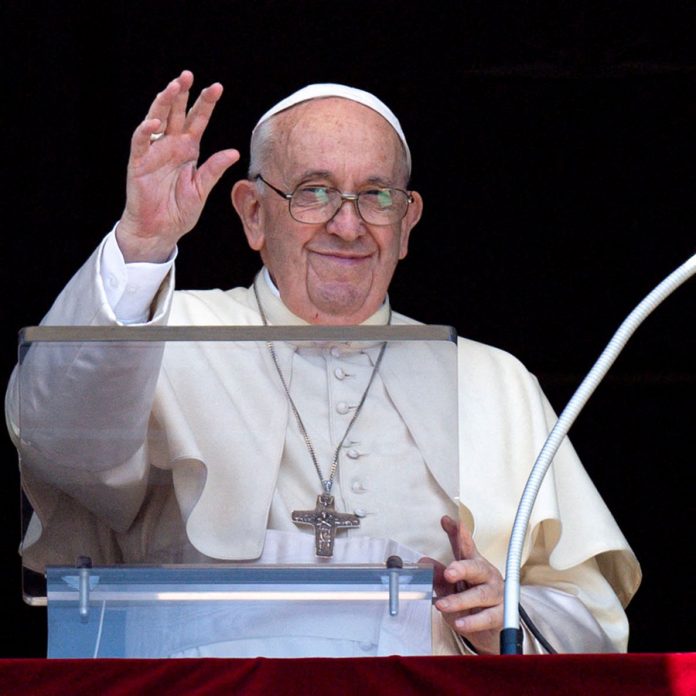 …restitution not a preserve of the Jews

AFRICA does not need platitudes, but implementation of Leviticus 6 verses 1-7: The Lord said to Moses:

“If anyone sins and is unfaithful to the Lord by deceiving a neighbour about something entrusted to them or left in their care or about something stolen, or if they cheat their neighbour, or if they find lost property and lie about it, or if they swear falsely about any such sin that people may commit —  when they sin in any of these ways and realise their guilt, they must return what they have stolen or taken by extortion, or what was entrusted to them, or the lost property they found, or whatever it was they swore falsely about.

They must make restitution in full, add a fifth of the value to it and give it all to the owner on the day they present their guilty offering. And as a penalty they must bring to the priest, that is, to the Lord, their guilt offering, a ram from the flock, one without defect and of the proper value. In this way, the priest will make atonement for them before the Lord, and they will be forgiven for any of the things they did that made them guilty.”

Pope Francis’ visit from July 25-30 to Canada’s indigenous population was a sham as he did not read and practice Leviticus 6 verses 1-7.

Although they corrupted ‘The Way Of Yahweh’ and called it their ‘Holy Bible’, they failed to totally extinguish the truth, as no human being can ever bury Yahweh’s truth.

If the Pope was genuine, he should have told the Canadian Government about this chapter and talked about compensating the indigenous people of Canada.

The article began thus: “At the beginning of the 15th Century, the Roman Catholic Church provided the ‘ethical’ base for the enslavement of American natives and studier Africans, stating that, ‘unlike Europeans, the Africans have no Soul’.”

This is still the same today because the Pope ‘apologised’ to light-skinned natives like himself of Canada first before the remnants of slavery in the US, the Caribbean Islands, South America and here on the motherland, who suffered colonialism.

The natives in Canada were never relocated from their homeland like the Africans (Nahasis).

Because of the statement of the Catholic Church, Africa has never recovered and regained her Yahweh-given self-worth.

Robin Walker from his book When We Ruled, shows how the motherland was before being overrun by Tambous (whites) at the instigation of the Roman Catholic Church and I am sure the Pope is well aware of this.

This is what European merchants, travellers and explorers saw when they visited Africa 500-or-more years ago, before slavery.

Writes Walker: “When they arrived in the Gulf of Guinea and landed at Vaida (West Africa) the captains were astonished to find streets well laid out, bordered on either side for several leagues by two rows of trees; for days we travelled through a country of magnificent fields, inhabited by men clad in richly clad coloured garments of their own weaving.

According to Professor Leo Frobenius: “Further south in the Kingdom of the Congo, a swarming crowd dressed in ‘silk’ and ‘velvet’; great states well-ordered and down to the most minute details: powerful rulers, flourishing industries – civilised to the marrow of the bones.

And the condition of the countries on the eastern coast- Mozambique, for an example – was quite the same.

And they told those old captains, those chiefs of expeditions the De Marchis, the Pigafettas and all others what they told is true.

It can be verified.

In the old royal Kunstkammer of Dresden, the Weydmann collection of Ulm, in many other European ‘curiosity cabinets’ one still finds collection of objects from

West Africa dating from that epoch; wonderful plush velvets of an extreme softness, made from the tenderest leaves of a certain banana tree; stuffs, soft and pliant brilliant and delicate as silks, woven with well-prepared raffi fibre, ceremonial javelins – their blades to the very points inlaid with the finest copper, bows so graceful, and ornamented so beautiful that they would do honour to any museum of arms whatsoever; calabashes decorated with the most perfect taste; sculpture of ivory and wood, the workmanship of which reveals skill and style.”

These narratives were first-hand supplied to Phillipo Pigafetta by a slave trader Duarte Lopes.

Pigafetta says the Congo measured 1 685 miles in circumference and was divided into six administrative provinces.

The capital Mbanza Kongo lay in the province of Mpemba.

It had a population of 100 000 people and was already cosmopolitan.

Some Portuguese lived there.

Moreover Christianity had spread to the region.

The Congolese King Nzinga a Kuwu had been baptised and renamed Dom Affonso.

The Portuguese who lived there had their town and it measured one mile.

This, I conclude, led to the downfall of the Congo Empire.

The Portuguese knew the weakness and the strength of this empire and the rest as they say is history.

In 1520 the Portuguese sent Francisco Alvarez a friar to Ethiopia to convert them to Roman Catholic Christianity but found them already converted and they were observing Coptic Christianity.

He saw the Ethiopian city Lalibela which contained 11 underground churches.

He was so overawed by what he saw that he wrote thus to his countrymen: “I swear by God in whose power I am, that all that is written, and I have left it (out) that they may not tax me with it’s being falsehood.”

This is from a Dutch visitor, Diereck Ruyters: “At first the town seems to be very large; when one enters it one comes into a great broad street which appears to be seven-or-eight times broader than the Warne Street in Amsterdam (Holland); this extends straight out, and when one has walked a quarter mile along it, he still does not see the end of the street.

The houses in this town stand in good order one close to the other, like houses in Holland.”

This is from Thomas Bowditch, an Englishman in 1817. His book Mission from Cape Coast to Asante was published in 1819.

This is what he says about Kumasi: “We entered Kumasi at two o’clock.

Upwards of 5 000 people, the greater part warriors, met us with an awful burst of martial music.

The smoke which encircled us from the incessant discharges of marquetry confined our glimpses in the foreground.

The dress of the captains was a war cap, with gilded rams horns projecting in front, the sides extended beyond all proportion by plumes of eagle feathers. Their vest was of red, covered with fetishes (ie) and sapphires in gold and silver.

They wore loose cotton trousers, with immense boots of dull red leather, coming half way to the thigh.

The king, his tributaries and his captains were resplendent in the distance, surrounded by attendants of every description.

At least 100 large umbrellas, or canopies, which could shelter 30 persons, were sprung up and down by the bearers with brilliant effect, being made of scarlet yellow and the most (sic) cloths and silk and crowned on top with crescent, pelicans barrels and arms and swords of gold.”

The English sent yet another fact-finding mission into West Africa.

This was led by a German called, Dr Henry Barth.

The findings were published between 1857 and 1858. During his travels, Dr Barth heard that African historians in the 1600 had already mapped the early history of the region.

The Book, Tarikh a Soudan, was still in circulation. William Winhood Reade wrote this about Denham and Clapperton: “Denham and Clapperton were astonished to find among the Negroes magnificent courts; regiment of cavalry; horses caparisoned in silk for gala days and clad in coats of mail for war, long trains of camel laden with salt corn and cloth with cowrie shells which form the currency – and kola nuts which Arabs call the coffee of Negroes.

They attended with wonder the gigantic fairs at which the cotton goods of Manchester, the real cloth of Saxony, double barreled guns, razors, tea and sugar, Nuremberg ware and writing paper were exhibited for sale.

They also found merchants who offered to cash their bills (i.e. cheques) upon houses at Tripoli; and scholars, acquainted with Avicennd, Averrors and Greek philosophers.”

This is Major Dubois’ narrative about the Songhai: “As my boat approaches, the banks and walls of the city (of Djenne in Mali) emerge in greater proportions from the encircling water.

At their feet, I can distinguish a harbour filled with large boats that have nothing in common with the accustomed piroque.

They were larger and strange in form, like the city that shelters them.

When I climbed the bank and entered the walls, my surprise took definite form, I was completely bewildered and thrown out of reckoning by the novelty and strangeness of the town’s interior.

Surely the angel of Habakkuk has suddenly transported me a thousand leagues away from the Sudan (i.e. Africa).

For it is not in the heart of a country of eternally similar huts (childish in their simplicity and confusion) that I should look to find a real town.”

The above were destroyed because of the utterances and actions of the Roman Catholic Church as alluded elsewhere in this article.

The spear of our destruction was Portugal and Spain.

The Pope must activate Leviticus 6 verses 1-7 before he retires in order for the motherland to reclaim her past glory and not a penitent visit to every country on the motherland.

He must address us as a continent because Africa was one country, one people and not 54 peoples inhabiting 54 countries before whites imposed themselves on us and then divided us in 1884.

The Jews got compensated, why not us the blacks?

If the Pontiff does not raise this, then, he also still believes we still don’t have a soul.

Why then worry about soulless people.

Credit however, must be given to him as he uttered the word ‘genocide’ about the Catholic behaviour in Canada but, this must be followed by reparations to the indigenous people of Canada.

Reparation must not be a preserve of the Jews because they are deemed white.

The missionaries were actually military personnel on reconnaissance and they achieved their missions.

History is a fable agreed on, said their hero Napoleon Bonaparte.

We as Africans must rewrite our story and leave a worthwhile legacy for our descendants.

In 1957 during Ghana’s independence, Kwame Nkrumah said a new African was born.

He forgot to mention that without retracing and claiming our past, we will always be in the doldrums.

Some might ask, what past and to these I urge them to read Lord Macaulay’s address to the British Parliament in 1835 and the letter by King Leopold II to his missionaries to Africa in 1883.

These two knew where our ancestors’ strength came from but we don’t because of the three evils among us we physically and spiritually cherish, Western religion, education and politics.