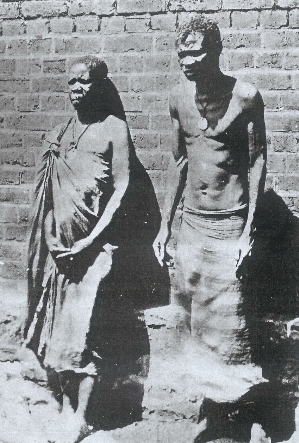 MOST Zimbabweans today have no respect for their ancestors or their mediums.
They say they are Christians.
Christians and ancestors do not sup together.
The ancestors are dead.
They have no place among the living.
Let the dead bury the dead.
They hold the same attitude towards the mediums of our ancestors.
They are agents of darkness.
They are possessed by evil.
They are used by the devil.
The Zimbabweans who do respect their ancestors confuse the identities of the ancestors with those of the mediums.
So, they give due respect to their ancestors and neglect their mediums.
That is why historians teach our children in history class that Chaminuka was killed by Lobengula at the Shangani River.
Nehanda was hanged by the British during the First Chimurenga.
Kaguvi was also hanged during the First Chimurenga.
Such lessons do not help our students to know the differences between the identities of our ancestors and the mediums through which they speak.
Rather, what the students get from such lessons is that the ancestors and their mediums are one and the same thing; and that their identities and names are interchangeable.
Not only students get this impression.
The generality of our people also do.
For example, they see Nehanda and Charwe as the same person when they sing: “Mbuya Nehanda kufa vachitaura.”
They see Chaminuka and Pasipamire as the same person when they say Chaminuka was killed by Lobengula.
They see Kaguvi and Gumboreshumba as the same person when they say Kaguvi was baptised by the British and named ‘Dismas’ (the good thief).
The truth that needs to be explained to our students and our people is that Lobengula did not kill Chaminuka.
He killed Pasipamire, the medium of Chaminuka.
The British did not hang Nehanda.
They hanged Charwe, the medium of Nehanda.
The British did not baptise and hang Kaguvi.
They baptised and hanged Gumboreshumba, the medium of Kaguvi.
The problem of confusing the ancestors with their mediums is not impossible to resolve.
What is required is a clear explanation of who the ancestors really were as people, before they died and became spirits, and who the mediums they speak through or spoke through are or were, as real people of flesh and blood.
The following information helps towards resolving these distinctions.
The earliest known ancestor of the Shona people, according to their oral history, was Tovera. Tovera’s son, Mambiri, is the father of Murenga Pfumojena Sororenzou.
Murenga is the founder ancestor of Zimbabwe.
Chaminuka, Nehanda and Mushavatu are Murenga’s children.
Mushavatu’s descendants are called Shava, derived from Mushavatu.
Pasipamire, Charwe and Gumboreshumba are Mushavatu’s descendants.
They are called Shava.
They are mediums of Chaminuka, Nehanda and Kaguvi.
Their identities are, therefore, distinct from these ancestors.
Pasipamire comes from Gavaza, Mondoro, where St Michaels Mission stands today, Kugomo kwaFata.
Charwe comes from Chishawasha, Manzou (Mazowe) where Chishawasha Mission stands today. Gumboreshumba comes from Chivero, Mondoro.
Many ancient settlements in Zimbabwe commemorate the names of our ancestors as distinct from those of their mediums.
Mapungubwe was the first settlement of our ancestors in southern Africa.
A town south of Mapungubwe is called Thovela after the earliest known Shona ancestor Tovera. Another is named Thoho ya Ndou after Murenga Sororenzou.
Our ancestors later moved to Zimbabwe and built their capital at Wedza in Marondera. Chaminuka’s son, Kutamadzoka, became Mutapa I.
After him, his brother, Chigwangu became Mutapa II.
He moved the capital to Great Zimbabwe.
There he became known as Rusvingo, which means, Builder of Stone Walls.
The Shona revere the spirits of their ancestors as guardians of their land.
Murenga’s spirit operates as a voice from the caves of Njelele.
This is where the First Chimurenga started.
This is also where the Second Chimurenga was sanctioned.
Both Chimurenga were organised in Murenga’s name.
All wars of the land in Zimbabwe are fought in Murenga’s name.
The organising spirits behind the wars are Murenga’s own children, Chaminuka and Nehanda together with the spirit of Kaguvi.
The first medium of Nehanda was Nyamhita.
The other medium of Nehanda was the old woman who was carried across the Zambezi by the comrades to help during the Second Chimurenga.
The first medium of Chaminuka was Kachinda.
Knowledge of the distinctions between the ancestors and their mediums goes a long way in giving respect where it is due, especially to the mediums in their roles as messengers of the ancestors; and in their own capacities as people who sacrificed their lives and those of their families and children towards our liberation and sovereignty that we enjoy today as a free people.
There are mediums of our ancestors living among us today.
These deserve our respect.
Failure to do so shall surely lead us into a spiritually forsaken people bowing down to the gods of others.