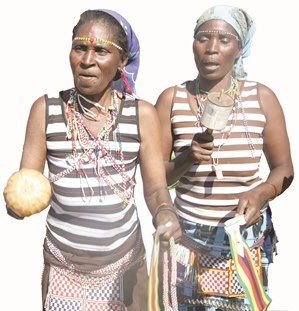 IN our last discussion, we called on indigenous black Zimbabweans to work to re-discover their spirituality.
We argued that without establishing our cultural and religious identity, we will not be able to defend our independence and sovereignty.
In one of her songs, popular gospel artist Mai Olivia Charamba calls on Africa to “restore your identity.”
These are profound words.
We must believe in ourselves no matter what people (foreigners) say!
And Mai Charamba goes on to put her finger on the real issue.
She exhorts Africa to believe that, “you are not poor but you are rich; You are rich, you are not poor!”
Then she goes on to ask us Africans who we are going to believe.
Are we going to believe those who say Africa is poor or that, in fact, Africa is rich? So we can argue that foreign religions cannot help us to believe in ourselves, simple!
We must stand on our own.
The lack of self-belief endemic among many Africans, including Zimbabweans, is a creation of the colonial process.
Through persuasion, bribery, including distributing sugar, trickery, brutal force and other ‘hook or crook’ strategies, tremendous damage was visited on the spiritual and cultural integrity of the people.
When the missionaries were invited to join the fray the (battle to subdue the spirit of the African), they received ‘wise’ counsel from the King Leopold of Belgium. He asked the ‘men of God’ not to waste time teaching Africans about God because they already know him.
Instead, King Leopold urged the Christian missionaries, to teach Africans to hate their own culture, to look down upon their customs and religion.
And most importantly, for the interests of these looting invaders, Africans were to be taught to hate wealth and all the trappings of good living.
They were to be taught that the good Lord hated and would condemn to hell, Gehena, all those who were rich.
“Blessed are the poor,” so the teaching went!
Who does not want to be blessed?
But I never really got an explanation as to what the blessing was all about.
The missionaries drummed into the skulls of the hapless Africans that material poverty was the preferred state in which God accepted people to enter heaven.
And there is a hymn to emphasise the point that happiness is in heaven, not on earth!
And to crown it all, the men of the cloth harped on this one: “It is more difficult for a rich man to enter heaven than it is for a camel to go through the eye of a needle!”
Despite the fact that Africans already had a thriving religion in which they believed in one God, Mwari Musikavanhu, the Creator, missionaries made all efforts to discredit the God of the Africans, claiming their own was the one and only God. The ‘African God’ was portrayed as evil, the same brush also painted the spirit mediums ‘masvikiro’ and ancestral spirits ‘vadzimu’.
We have already indicated that for most religions, there are intermediaries between God and man.
In the Jewish religion, prophets (so many described in the Bible) were the intermediaries while Jesus and Mohamed were the prophets for Christianity and Islam respectively.
While Mohamed remained a prophet in Islam, the Christians deified Jesus to make part of the so-called trinity, he became the Son of God.
The Shona and other African religions recognise God, and his intermediaries are the masvikiro.
God speaks to the people through the spirit mediums, masvikiro.
There seems to be no contradiction between the Shona belief in one almighty God and the Christian God.
However, to conquer the spirit of the people and disconnect them from their own religion and reality, the missionaries went all out to demonise the Shona religion and Mwari Musikavanhu.
We understand that the missionaries spent several years without any converts until they made a conscious decision to condemn African religion and to intensify their rhetoric about sinners burning in hell.
Sunday preaching was found to be inadequate as the message did not seem to sink fast or deep enough.
So, mid-week preaching, prayer meetings and Bible study sessions were introduced.
This furious assault on the African religion continues today.
University students have not been spared.
Some have excused themselves from completing academic assignments citing the pastor’s verses that had to be read taking precedence over academic homework.
The approach has been to catch them young teaching them that there is no hope anywhere except through believing in Jesus Christ.

l To be continued