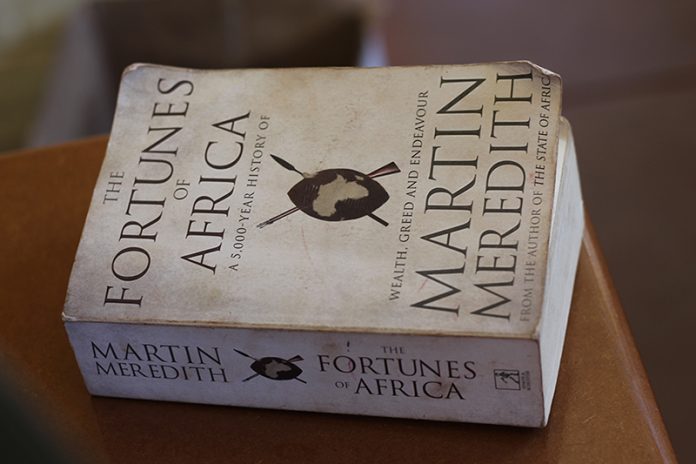 THE book under review this week is Martin Meredith’s The Fortunes of Africa: A 5000 Year History of Wealth, Greed and Endeavour.
Meredith is a journalist, biographer and historian who has written extensively about Africa.
Through his literature, Meredith provides an insight into perceptions around Africa.
He touches on topics that include leadership, democracy, heritage and revolutions, among others.
The Fortunes of Africa: A 5000 Year History of Wealth, Greed and Endeavour is a book that focuses on Africa’s history.
Meredith dwells on aspects of wealth, religion, conquest, revolts and independence in Africa.
He provides an in-depth research, highlighting the beginning of an African continent that suffers from invasions as a result of its heritage and resources that are scarce in other parts of the world.
According to Meredith, the Romans relied on their colonies in North Africa for vital grain shipments to feed the mushrooming population of Rome.
Meredith labels Africa’s resources as ‘fortunes’ because, even after centuries of exploitation, Africa remains the richest continent in terms of its abundant resources.
This review will therefore focus on the first part of the book that delves into the history of ancient Africa, paying particular attention to the social, economic and political organisation of one of the ancient cities of Egypt and its importance in telling the African story.
It is against this background that it is fundamental for readers of Meredith’s book to take into consideration that due to history, generations of today are able to plan for the future.
The first part of the book, The Fortunes of Africa: A 5000 Year History of Wealth, Greed and Endeavour presents Africa as a continent progressing on its own and showing off a unique development that opposes the cynical idea that Africa is a ‘dark continent’ as portrayed by writers such as Joseph Conrad in Heart of Darkness.
Meredith clearly shows that the advent of iron technology in Africa initiated economic development in different African states.
“The advent of ironworking technology produced a new dynamic in tropical Africa. By the middle of the first millennium BCE, iron working was well established in the region between the Chad Basin and Great Lakes of East Africa. It had also spread to areas of West Africa,” writes Meredith.
The book provides evidence of the existence of people who are connected in a social organisation that displays similarities, even in languages.
Such evidence shows a co-existence between ethnic groups and tribes in Africa as well as displaying a connection in the way they lived.
Writes Meredith: “They discovered that almost all the inhabitants of the southern half of Africa spoke languages that were closely related.
Across a range of some 600 languages, many words and terms were used in common.
Another feature of their society was the importance they attached to the veneration of ancestral spirits.
Ancestors required respect and remembrance, neglecting them was likely to cause misfortune.”
The book also shows the intelligence of African people as displayed in the extraordinary construction of pyramids in Egypt and, we might add, the Great Zimbabwe Monument, among many many others.
“The Step Pyramid at Saqqara was the first monument in the world to be built entirely of stone,” writes Meredith.
“Rising to a height of 204 feet, it was the tallest building of its time.
And its construction marked the beginning of the Pyramid Age.”
Interesting about Meredith’s research is that he clearly shows that Africa has always remained a centre of attraction that has seen her fall prey to stronger foreign states, including Rome.
The wealth of Africa, Meredith points out, was the source for survival, not only for Africans, but for the Romans as well.
Writes Meredith: “Egypt alone supplied 100 000 tonnes of corn a year.
But other territories in North Africa had become even more important: their shipments amounted to 200 000 tonnes.
For a period of more than 300 years, Africa exported to Rome about half million tonnes of corn a year.”
History recorded in The Fortunes of Africa: A 5000 Year History of Wealth, Greed and Endeavour shows that the Romans relied more on Africa for their economic development and in controlling their escalating population back in Rome.
“Rome presided over its African provinces with a light touch,” says Meredith.
“In Egypt, Roman governors relied on the old bureaucracy to maintain control and raise taxes, much as before.
A small elite of Roman citizens sat on top of the social hierarchy, enjoying a monopoly of power.”
In the book, readers are availed information that highlights the existence of the Khoi Khoi and the San as well at their initiatives in living evidence of their survival.
Writes the author: “In southern Africa, below the Zambezi River, artists belonging to groups that later became known as San pursued a different tradition.
At thousands of sites across the region, San artists painted scenes in fine-line brushstrokes of human activity, totemic animals and creatures from an imaginary world.”
Meredith’s narratives on Africa must be closely followed and Part Two of this review will focus on the Portuguese and the introduction and practice of other religions in Africa.