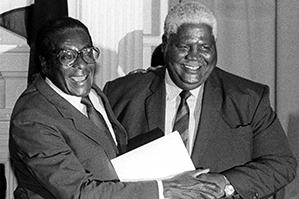 THE Unity Accord signed on December 22 1987 by the late Cde Joshua Nkomo, leader of the Patriotic Front ZAPU and Cde Robert Mugabe, representing ZANU PF was one of the major political milestones in Zimbabwe’s history since independence in 1980.
The agreement ushered in peace following a spate of violence in Matabeleland provinces and part of the Midlands.
The Unity Accord was a successful attempt to get over that dark chapter in the history of the country.
Below, we publish the full text of the Unity Accord President Mugabe and Dr Nkomo signed on December 22 1987
Preamble
Conscious of the historical links between ZANU PF and PF ZAPU in the struggle for national independence and democracy through the strategy of the armed struggle and their alliance under the banner of the Patriotic Front;
Cognisant of the fact that the two Parties jointly command the support of the overwhelming majority of the people of Zimbabwe as evidenced by the General Election results of 1980 and 1985 respectively;
Notwithstanding that Zanu PF commands a greater percentage of the said overwhelming majority of the people of Zimbabwe;
Desirous to unite our nation; establish peace, law and order and to guarantee social and economic development and political stability;
Determined to eliminate and end the insecurity and violence caused by dissidents in Matabeleland;
Convinced that national unity, political stability, peace, law and order, social and economic development can only be achieved to their fullest under conditions of peace and the unity primarily of ZANU PF and PF ZAPU;
We, the two leaders of ZANU PF and PF ZAPU, that is to say Cde Robert Gabriel Mugabe, First Secretary and President of ZANU PF, and Cde Joshua Mqabuko Nkomo, President of PF ZAPU, assisted by a Sub-Committee of equal members of ZANU PF and PF ZAPU, held 10 meetings to discuss the possible unity of our two parties as follows.
Consequent upon these meetings and paying due regard to all the principal issues raised thereat, we have agreed as follows: –
The Agreement

1. That ZANU PF and PF ZAPU have irrevocably committed themselves to unite under one political Party;
2. That the unity of the two political Parties shall be achieved under the name Zimbabwe African National Union (Patriotic Front) in short ZANU PF;
3. That Cde Robert Gabriel Mugabe shall be the First Secretary and President of ZANU PF;
4. That ZANU PF shall have two Second Secretaries and Vice-Presidents who shall be appointed by the First Secretary and President of the Party;
5. That ZANU PF shall seek to establish a socialist society in Zimbabwe on the guidance of Marxist-Leninist principles;
6. That ZANU PF shall seek to establish a One-Party State in Zimbabwe;
7. That the leadership of ZANU PF shall abide by the Leadership Code;
8. That the existing structures of ZANU PF and PF ZAPU shall be merged in accordance with the letter and spirit of this Agreement;
9. That both parties shall, in the interim, take immediate vigorous steps to eliminate and end the insecurity and violence prevalent in Matabeleland.
10. That ZANU PF and PF ZAPU shall convene their respective Congresses to give effect to this Agreement within the shortest possible time;
11. That, in the interim, Cde Robert Gabriel Mugabe is vested with full powers to prepare for the implementation of this Agreement and to act in the name and authority of ZANU PF.