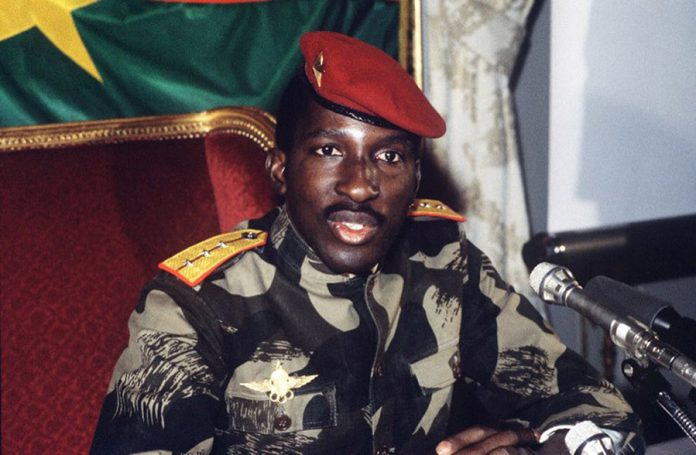 ‘REMEMBERING Thomas Sankara: An Upright Man in a Sinful World’, thus went the headline which provoked the question: What would have Thomas Sankara done to fend off the Western-sponsored illegal economic sanctions against Zimbabwe on a day like this?

Yes, this was an apt, accurate and precise headline.

There could not have been a better description of that great man.

And great men, true heroes of this world, are by their very nature difficult to describe.

It is almost always impossible to emulate them, to match their deeds and implement them even.

They die with their ideas, principles and values, so it seems.

Even when they die, the ‘might’ of the Western pen, cameras and microphones, it appears, kill them again.

The West summons all its resources and propaganda weaponry to erase from our memories the ideals and ideas of our heroes and heroines.

We are then left with loads and loads of narratives designed to subdue our ever ‘feeble’ minds from understanding and knowing who we are and what we are supposed to be.

With time, our heroes will depart from our world as well as our minds and replaced by new history that makes us hate ourselves, our skin and our land.

That is what Thomas Isidore Sankara fought against and died for as he sought to give Africa new ideas and trajectory.

And the West has tried to make us forget about this great man and our other departed heroes through their incessant anti-Africa propaganda.

But in a world where a new breed of real and true pan-Africanists, itself a threat to the West’s hegemonic control of information and ideas, the likes of Sankara and his ideas are being given a new lease of life.

The ideas are being summoned from the grave; in the wake of the continued abuse of Africa by mainly Western powers through their never-ending plunder of the continent’s resources, to once again light the path towards total economic emancipation.

They are rising from their graves to lead Africa’s new fight against imperialism and neo-colonialism.

This is why they never died in the first place.

They simply took a long sleep.

And now, as Africa is engaged in a new fight, we now cut short that sleep for inspiration.

Still the question begs: What would Thomas Sankara have done to fend off the illegal economic sanctions against Zimbabwe on a day like this?

Sankara was a dynamic, staunch and fierce pan-Africanist who not only drew from rhetoric but practised what he preached.

A real champion of nationalism and economic empowerment, the vibrant Sankara took the bull by the horns negating Western economic prescriptions that have time and again condemned black people of this world to poverty.

He was the President of Burkina Faso’s revolutionary Government from 1983 to 1987, during which time he gave new meaning to his country by renaming it from ‘Upper Volta’ to ‘Burkina Faso’, which means ‘Land of Upright Men’.

“Sankara wanted a thriving Burkina Faso, relying on local human and natural resources, as opposed to foreign aid, and starting with agriculture, which represents more than 32 percent of the country’s GDP and employs 80 percent of the working population. He smashed the economic elite who controlled most of the arable land and granted access to subsistence farmers. That improved production, making the country almost self-sufficient.

Sankara’s foreign policy was largely focused on anti-imperialism, with his government shunning all foreign aid. He insisted on debt reduction, nationalising all land and mineral wealth, and averting the power and influence of the International Monetary Fund (IMF) and World Bank.

His domestic policies were focused on preventing famine with agrarian self-sufficiency and land reform, prioritising education with a nationwide literacy campaign, and promoting public health by vaccinating 2,5 million children against meningitis, yellow fever and measles.

As an ardent advocate of self-sufficiency and a strong opposition to foreign aid or intervention, Sankara held the conviction that ‘he who feeds you, controls you’.”

There are many similarities between Sankara’s ideas and the path that Zimbabwe has taken in order to develop the livelihoods of its people.

They border on Land Reform and Economic Empowerment but, unlike Sankara who was assassinated for those ideas, Zimbabwe has been taken to the torture chambers with the idea that its citizens will rebel against their Government.

Today, the world is with us, sending a clear message to the West that the people of Zimbabwe and, indeed, the rest of the world are saying NO to sanctions.

Let us go back to the iconic Sankara.

Miffed by colonially-induced land imbalances, Sankara embarked on a land redistribution programme, taking it from those he called colonial ‘landlords’, and gave it to the toiling peasants in the countryside.

The result of this masterstroke was a miracle.

During that short period, Burkina Faso could feed its people without support from outside.

Sankara also stopped the importation of apples from France, stating that Burkina Faso had the capacity to produce tropical fruits that would be consumed by its people.

As we march against sanctions today, let us pause for a moment and remember what Sankara did, not only for his country but the continent as a whole and consider how that can be used to develop the country.

Self-sufficiency is the way to go.