Home Old_Posts Saboteurs in our midst 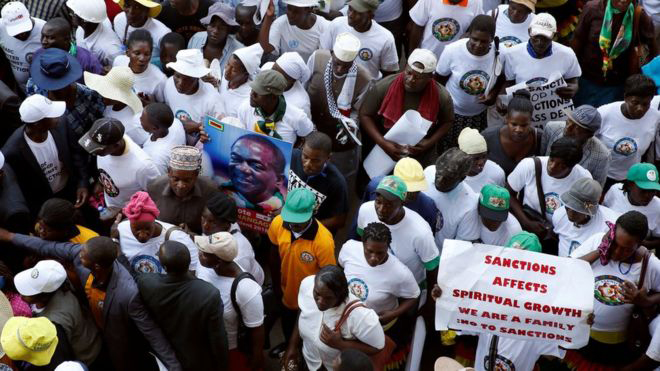 THE recent resurgence of the black market exchange rate which has culminated in a shocking upward spiral of prices of goods and services is part of a well-knit plan by some rogue elements within and outside the country to lay a fertile ground for an uprising against the Government, this publication can exclusively reveal.

Information at hand shows that the said bad apples are taking instructions from the opposition and some Western embassies on ‘strategies’ on how to weaken the local currency in the wake of the stellar showing by the Government on infrastructure development, food security and economic stabilisation, among other many notable achievements.

The idea is to create an implosion of the economy and create room for insurgency so as to save face, especially for the opposition which is facing the embarrassing prospects of a crushing defeat in the 2023 harmonised elections.

Also, the ‘plan’ is to render the weekly auction system, which has stabilised the currency since its inception in June 2020, redundant.

This has resulted in prices on the market shooting through the roof.

This publication has gathered that there are some elements (names supplied) who are sourcing foreign currency from the auction system and trading it on the black market, resulting in the calamitous rise in prices.

We shall soon be exposing them and their shenanigans.

Their project, which has been steadily building up in recent weeks, has since reached full cycle and, as we anticipated, the enemies of the State are doing exactly what we said they would.

On August 6, this publication warned the nation against economic sabotage.

Below is what we said:

“Government is firmly fixed on uplifting the livelihoods of all its citizens regardless of colour, creed or political affiliation.

That plot has been unearthed by our ever alert security forces whose sterling efforts in preserving peace and security in the country and outside our borders we celebrate this historic month.

The ruse by the enemies of the State of citing the disturbances in South Africa as the reason for price hikes fools no-one.

But that has failed and will not work.”

Previously, the argument has been that the country is in the doldrums because of what the West calls ‘economic mismanagement’ but we have given our people access to the economy yet those people are now being sponsored by the West to abuse that facility in the fatalistic canard that sabotaging the economy will catapult their preferred candidates to power.

What is going to happen is that the saboteurs will spend Christmas behind bars; they will come back and tell their allies a lesson or two about patriotism.

You cannot protect an economy which you do not control, which is why it is imperative that Zimbabwe continues to empower its citizens.

But those who have been empowered by the Government have a duty — they have a role to defend their economy.

Any form of sabotage, as is happening, is treasonous and, soon, some will live to tell the tale because the security officers will up the tempo on their blitz against the saboteurs.

And this sabotage is firmly rooted in the West’s now nauseating regime change agenda.

Let us consider an April 27 2008 article by Stephen Gowans titled ‘Expressions of imperialism within Zimbabwe’ and unravel why there are fresh attempts to paralyse the economy.

“The effect of the IMF programme was devastating. Manufacturing employment tumbled nine percent between 1991 and 1996, while wages dropped 26 percent.

By 1996, the Mugabe Government was starting to back away from the IMF prescriptions.

By 1998, it was in open revolt, imposing new tariffs to protect infant industries and providing incentives to black Zimbabwean investors as part of an affirmative action programme to encourage African ownership of the economy.

These policies were diametrically opposed, not only to the IMF’s programme of structural adjustment, but to the goals of US foreign policy.

The IMF refused to extend loans to Zimbabwe.

By February 2001, Zimbabwe was in arrears to the Bretton Woods institutions.

Ten months later, the US introduced the Zimbabwe Democracy and Economic Recovery Act, a dagger through the heart of Zimbabwe’s economy.

Kenyan author Mukoma Wa Nguyi invites us to think of Zimbabwe ‘as Africa’s Cuba. Like Cuba, Zimbabwe is not a… military threat to the US and Britain. Like Cuba’, in Latin America, Zimbabwe’s crime is leading by example to show that land can be redistributed – an independence with content.

If Zimbabwe succeeds, it becomes an example to African people that indeed, freedom and independence can have the content of national liberation.

Like Cuba, Zimbabwe is to be isolated and, if possible, a new government that is friendly to the agenda of the West is to be installed’.

When the legislation was ratified, US President George W. Bush said: ‘I hope the provisions of this important legislation will support the people of Zimbabwe in their struggle to effect peaceful democratic change, achieve economic growth and restore the rule of law’.”

Going with the above, it is clear that the idea is to create the impression that corruption, not sanctions, is the cause of the country’s problems.

Which explains why, even as Zimbabwe has embarked on a ‘reform’ process, the sanctions will not be removed for as long as the Land Reform and Resettlement Programme of 2000 has not been reverted to pre-1998 land ownership patterns.

Not even compensation of white farmers is enough to mollify their anger against Harare for embarking on land reform.

John and Karl Mueller note in their 1999 article titled ‘Sanctions of Mass Destruction’ which appeared in the May-June 1999 issue of the Foreign Affairs Journal that: “The big countries have at their disposal a credible, inexpensive and potent weapon for use against small and medium-sized foes. The dominant powers have shown that they can inflict enormous pain at remarkably little cost to themselves or the global economy. Indeed, in a matter of months or years, whole economies can be devastated.”

It has been years now since the West adopted their war against Zimbabwe, using all sorts of strategies, including the latest one — weakening our currency!

That, as with other strategies, will fail.

By 2001, The Sunday Times was urging London to spearhead a worldwide economic boycott of Zimbabwe.

Writes Gowans: “Until decisive action is taken, the whole region is a high-risk area for investment.”

Now we are in 2021 and the West is still trying to send signals to the rest of the world that Zimbabwe is an unstable economy that is hostile to investors.

However, as Vice-President Constantino Chiwenga warned late last month that the days of economic saboteurs are numbered, it is incumbent upon those who have been embarking on those anti-Zimbabwe activities to stop them forthwith.

“Business should not be hoodwinked by some malcontents operating on the parallel foreign exchange market where foreign exchange arbitrage has become their lucrative business at the expense of the stability of the economy,” he said.