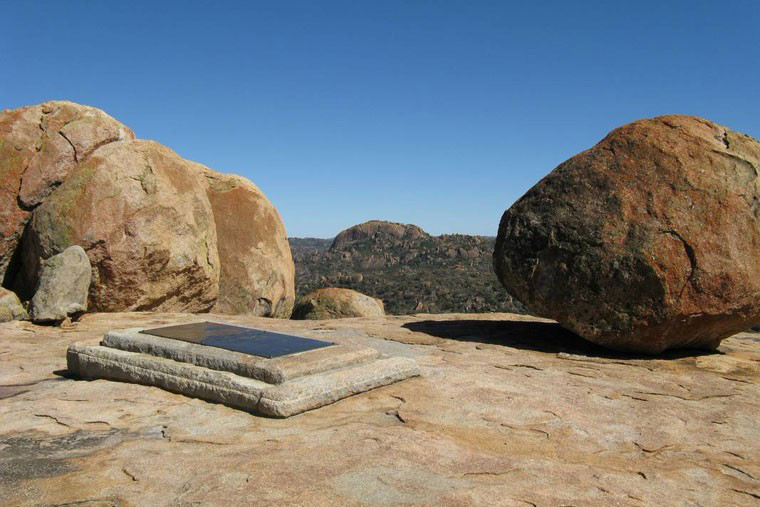 AS the desecration of Zimbabwe’s Monuments and Heritage Sites by Western-sponsored organisations and tourists continues, there is need to revisit conservation, preservation and management plans of these sites to preserve them for future generations.

These plans need to support integrated management of these sites and monuments to achieve sustainable development, which respects both cultural and natural parameters of our cultural and spiritual heritage.

Zimbabwe is blessed with sacred sites, caves, mountains, groves, monuments and rivers far greater than the cathedrals or holy springs in many Western countries.

In some of these places lie the ancient birthplaces of our ancestors.

A recent visit to the Matobo Hills, which used to provide a strong focus for the local community by using  shrines and sacred places closely linked to traditional, social and economic activities, showed the site has slowly been turned into a small ‘England’ by some diehard white Rhodesians.

The desecration of some of our heritage places under the guise of conservation by white groups such as the Matobo Conservation Society could be described as the rape of our sacred sites by these organisations that masquerade as genuine conservators of our natural historical places. There are also some organisations carrying out research on rock paintings and various caves in the Matobo Hills.

The hills are known to have the highest concentration of black eagles in Africa because of the abundant populations of the rock hyraxes (mbira).

However, there are ‘researchers’ who are disrupting this eco-system by raiding the nests of these raptors and taking away the eaglets for captive breeding in Western countries.

The researchers blamed the community for disrupting the eagles ‘main food source’, the hyrax, through poaching, an accusation community leaders say is not true as they have lived with these raptors for a long time.

The Matobo Hills are a unique area characterised by outstanding large bare granite hills and broken kopjes, interspaced with marshes and sponges that give rise to an intricate network of tributaries leading to the larger rivers of Whovi, Maleme, Mtsheleli and Tuli.

Cecil John Rhodes simply chose the Matobo Hills to trample on our heritage as evidenced by the serious conservation efforts of some colonial replicas in the hills.

The larger part of the area, which now forms the Rhodes Matopos National Park, was declared a conservancy in 1926.

Rhodes ordered his burial on one of the granite hills that commands a magnificent view of the landscape.

Today, this natural landscape stands out as one of the highlights for local and international visitors. Local communities view Rhodes’ burial at Matopos World’s View as a desecration of the landscape.

Many people in the country and around Matobo Hills have specific places  or sites where they carry out clan rituals such as appeasing  spirits, praying for the sick (for example at Dula), praying to territorial spirits in times of disasters or outbreak of diseases and other traditional ceremonies which are important in their day-to-day lives.

There are also annual pilgrimages to the Njelele shrine for things such as rain-asking, but organisations working in Matobo have, over the years, put undue influence on the local chiefs not to accept outsiders, citing desecration fears yet they are the ones responsible for the cultural breakdown of the area.

For example, wetlands and valleys below dwalas, pools, springs and wells used for rain-asking ceremonies are sadly being used for diving lessons and as picnic sites by hordes of white groups who throng the hills every weekend.

Landforms that represent points of communication with the spirit world have also been invaded.

Rhodes’ grave, the memorial plaques, the famous anthill where they brokered a peace settlement with the Ndebele warriors as well as dams and wetlands are well cared for at the expense of some shrines such as Dula and Njelele and some sacred pools that are now wearing out because of lack of proper care.

One intriguing fact is that the Matobo Conservation Society, a predominantly white organisation, has been carrying out several activities that have nothing to do with the conservation of these hills except for a few white colonial replicas in the park.

The ‘conservation’ society’s activities include angling in the sacred pools, horse riding, rock climbing, cycling and nature walks guided by white guides, among other elitist activities that have nothing to do with our African heritage.

The organisation has insisted on a comprehensive management plan of the Matobo Hills while clandestinely providing financial support to organisations purporting to be taking care of the Matobo.

In colonial and post-colonial times, people have utilised the gigantic boulders for spiritual purposes, especially those that are elevated, delicately balanced, or protect springs and pools.

Studies of intangible heritage show that selected boulders and pools in the Matobo landscape have been, and continue to be, used as sacred venues for worship.

The Mwari religion, which is still practiced in the area, and which may date back to the Iron Age, is the most powerful oracular tradition in southern Africa. The Matobo rocks are seen as the seat of Mwari and of ancestral spirits.

Sacred shrines within the hills are places where contact can be made with the spiritual world.

The living traditions associated with the shrines represent one of the most powerful intangible traditions in southern Africa and one that could be said to be of universal significance.

The natural values of the cultural landscape of the Matobo Hills World Heritage Site stem from the way the cultural beliefs of people over millennia have been inspired and influenced by its rock formations (some which appeared as balanced rocks on the Zimbabwean  50-cent coin) and associated features, as well as particular species of fauna and flora.

There is already development pressure from the demand for amenities and facilities by visitors, which is not compatible with such sites.