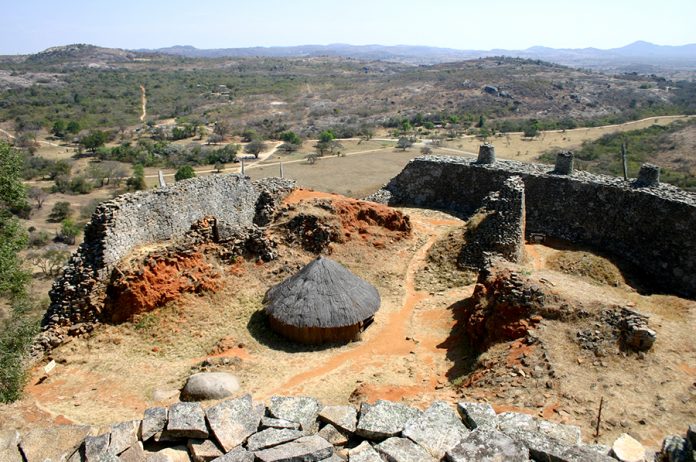 STONES were ingeniously stacked one after the other to build a magnificent fortress with neither mortar nor cement for bonding — this form of building is called ‘dry bonding’.

This is a feature common to more than 500 stonewalled sites dotted across Zimbabwe, South Africa and Botswana.

They have a fascinating history, beautiful views and the marvel of stone-walled cities so artfully built they seem to have grown from the fabric of the land.

So sophisticated are the sites that, for centuries, Europeans perpetuated lies that monuments, like Great Zimbabwe, could not have been built by blacks.

Europeans believed Africans were incapable of building such metropols.

From the early 14th Century, geographers were convinced there was a lost Christian kingdom, ruled by a man called Prester (Priest) John, marooned in the depths of ‘darkest Africa and waiting to be rescued.

By the early 17th Century, Portuguese scholars had a new hypothesis: The Zimbabwe region was where the Phoenicians had gone to mine gold for Israel’s King Solomon.

“When the Portuguese traders arrived at the Great Zimbabwe, they believed it to be the biblical Ophir and the legendary home of Queen Sheba,” writes historian Professor Thomas Huffman.

Three hundred years after the search for the Great Zimbabwe had begun, the ‘lost city’ was finally ‘discovered’ by the German explorer Carl Mauch.

Even then, Mauch was quite convinced that the two main buildings at the site were copies of King Solomon’s temple in Jerusalem, and the Israelite palace where Solomon and the Queen of Sheba had, according to the Bible, found bliss together.

Whether it was the lost kingdom of Prester John, or Solomon’s dazzling African colony or the Queen of Sheba’s, the idea that a part of Southern Africa had once belonged to non-Africans was very much appealing to the British and other imperial forces.

Research finally proved that Great Zimbabwe was founded in the 11th Century by a Bantu population of the Iron Age, the Shona.

In 1905, British archaeologist David Randall-MacIver determined the ruins were medieval and built by the local African Bantu peoples.

In 1929, his findings were confirmed by another British archaeologist, Gertrude Caton-Thompson.

Southern Zimbabwe has more than 60 archaeological sites while the central part has a cluster of 28 stone-walled sites requiring constant maintenance to reverse the effects of wind, rain, storm and the damage inflicted by colonising plants and animals.

However, most of these metropoles have been lost to vandalism, negligence and looting.

They have become forgotten kingdoms and hidden treasures.

While some advocate scientific conservation and management strategies, others opine that many heritage sites in Zimbabwe ,like in many other parts of Africa, were revered and effectively managed through traditional strategies such as the deployment of taboos and traditional restrictions, among many others.

With this observation, some scholars like Ndoro (2001: 12) have argued: “Colonisation ushered into sub-Saharan Africa the ‘Western-style’ of heritage conservation.

Much of that style was developed in Zimbabwe at Great Zimbabwe site in particular.”

As suggested by  Masey  (1911:37):  “The Western-style strategy at Great Zimbabwe might have been caused by the size of this premier monument and its multiple values that attracted attention of researchers, mostly amateur archaeologists,  treasure hunters and tourists or pseudo-tourists who brought diverse kinds of conservation problems to the site.”

These problems have been compounded by the debate on how heritage sites can be sustainably managed in order to benefit present and future generations, especially in this age of globalisation.

National Museums and Monuments of Zimbabwe (NMMZ), through its Masterplan for Archaeological Resource Conservation and Development, recognises the need for involvement of local communities in heritage protection.

It formulated an ‘adopt-a-site strategy’ that encourages communities to utilise sites or monuments in their localities, especially for religious and educational purposes.

This system has helped NMMZ with maintenance programmes of sites which are situated away from their administrative centres.

For example, Chibvumani Heritage Site in Bikita was handed over to the nearest school, Mamutse Primary School, in the 1990s by NMMZ southern region through its adopt-a-site programme.

The idea of adopt-a-site programme entails that the local community engages in active participation rather than passivity in the day-to-day management of heritage sites.

In this case, the school was given the task to clean the site and report to the NMMZ of any problem or acts of vandalism to the  site (Memo Ref D/2, (b)/wcm, E4 File).

The NMMZ provided work tools for the programme.

On the other hand, Mamutse Primary School was given the mandate to use the site as an educational resource centre.

Teachers take classes to the site to enhance classroom work and,  in this way, it was argued the site would be preserved and presented by the school on behalf of the community.

The NMMZ assisted in training guides from the school to take tours of Chibvumani Monument.

Since the inception of the adopt-a-site programme at Chibvumani, the school has managed to carry out its part of the bargain.

The site has been cleared of vegetation overgrowth and is secured from vandalism and looting.

In an interview with The Patriot, Permanent Secretary in the Ministry of Home Affairs and Cultural Heritage Aaron Nhepera said Zimbabwe must take practical steps to safeguard its archaeological monuments which are threatened by accidental damage or structural deterioration.

“We need to mobilise funding to restore, research and conserve our archaeological monuments which are dotted around the country,” said Nhepera.

He also urged local communities to take ownership of heritage sites in their communities.

“We urge all stakeholders and development partners, as well as traditional leaders and police to give cultural heritage protection a priority.

“We have a duty as the current generation to pass these heritage sites to future generations.

“If we neglect these sites, then we have reneged on our duty on inter-generational equity.”

Sadly, there is widespread ignorance on Zimbabwe’s cultural heritage sites.

Their history and significance is little known.

In 1965 a celebrated British historian, Hugh Trevor-Roper once said there was only the history of Europeans in Africa.

Said Trevor-Roper: “Perhaps, in the future, there will be some African history to teach.

But at the present there is none, or very little: there is only the history of Europeans in Africa.

The rest is largely darkness, like the history of pre-European, pre Columbian America.

And darkness is not a subject for history.”

Hopefully, future generations will know of their history and see that there is much to be proud from their past – a past which provides the foundation for an even greater future.

Indeed, it is time to place emphasis on African history and challenge the stereotype of framing Africa in terms of poverty, war and famine.

It is time to see Africa for what it is – the cradle of mankind!