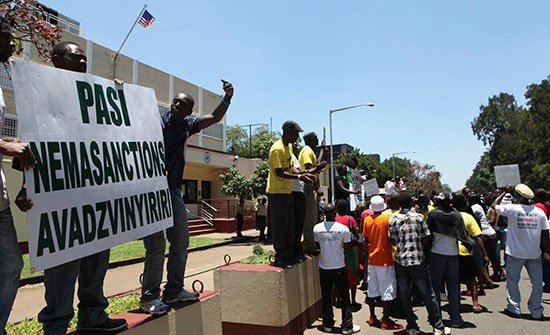 THERE is a critical aspect about Zimbabwe’s economic story that those who peddle the narrative that the country’s problems are self-inflicted try to mask.

That narrative has always revolved around issues to do with human rights and policy inconsistencies, among others.

High in that unpalatable narrative is the issue of the heroic and historic land reform and resettlement of 2000, often described as ‘violent’, ‘chaotic’ and ‘a land grab’.

That line of thinking has, as expected, failed to garner currency among hard-pressed Zimbabweans and other progressive forces for many reasons.

First is the failure by the West and their local acolytes to erase from our minds the gory memories of the liberation struggle.

There have been several attempts to replace the struggle for freedom and independence with the inane struggle for democracy mantra, yet it is inconceivable that a war that brought democracy cannot be replaced by that which it gave birth to.

Land, freedom and democracy was what those young men and women gave up their lives for.

These modern day bureaucrats can never stand on the moral high ground and pretend to be champions of democracy on the basis of the few pieces of silver their Western handlers throw at them.

If anything, and what is lost on them is that, the land they stamp on when they spew their nonsense is where the real gold and silver is.

Let sanctions go and see how the belly brings out many glad tidings.

Which brings us to the second issue.

Zimbabweans have refused to buy into that self-inflicted narrative as seen by the continued thumping of the opposition MDC by ZANU PF in elections.

In every election that has been held in the country since 2002, ZANU PF, as the governing Party, has always entered into those polls handicapped by a ‘screaming economy’ as suggested by Chester Crocker.

Governing parties are mandated to develop the economy but ZANU PF, despite its glowing record from 1980, has not enjoyed that privilege due to the illegal economic sanctions on the country.

Where they have had to rely on their freedom to run the economy, they have had to summon the resilience of Zimbabweans who, to their credit, share an unbreakable bond with the ruling Party.

Resilience alone is not enough in an economy of so much potential and promise.

This is what the West realised when they unleashed economic ruin on this country.

In order to fully comprehend the damage inflicted by the sanctions on the people of Zimbabwe, one has to look at why the MDC Alliance are hell bent on creating a volatile security situation through their violent demonstrations.

The idea is to create an illogical scenario that ZANU PF is committing gross human rights violations in the country.

But the biggest violation of human rights comes from the illegal economic sanctions which are a serious threat to the country’s peace and security.

This is why there is something terribly wrong with the West’s call for so-called reforms to be implemented so that the sanctions can be removed.

The only reforms to be considered are the continued existence of those evil sanctions.

We will not relent on that because we know why the sanctions suit the West’s agenda.

Initially the sanctions were created to cut short the country’s future and while that strategy has been a disaster, the West will not just let go.

Now they have adopted the abductions strategy as a way to impose more sanctions on Harare.

Again that will not work.

It failed to work in Chile and it will not work in Zimbabwe.

“Chile has a very short future and after November 4 it will only have a past,” wrote America’s point man in Chile, Eduardo Frei, according to declassified CIA documents.

Another American intelligence officer based in Chile added:

“There is a graveyard smell to Chile, the fumes of a democracy in decomposition. They stank in my nostrils in Czechoslovakia in 1948 and they are no less sickening here today.”

With hindsight, it is safe to conclude that Salvador Allende’s Chile stood no chance once America’s arsenal was deployed against the Latin American country.

According to the declassified CIA documents, the wheels of the machine that was to depose and murder Allende were set in motion the day he rose to the helm of Chilean politics and it was only a matter of time for the inevitable to happen.

From day one, senior bureaucrats in Washington resolved that: “Chile was on a dead end street…” and the removal of Allende was the only way US interests in Latin America could be protected and promoted.

On September 15 1970, the CIA was “…directed to prevent Marxist Salvador Allende’s assent to the Chilean presidency on November 3. This effort was to be independent of concurrent endeavours being undertaken through, or with the knowledge…” of the State Department, according to a report issued by the CIA’s Chile Taskforce.

“Given the dismal prospects of a political formula being worked out to prevent Allende’s designation as President by Congress,” the report said, “(the) remaining alternatives centred around overcoming the apolitical, constitutional-oriented inertia of the Chilean military.”

We need to send a strong message to the West that the time has come for Zimbabwe to respond in kind to the illegal economic sanctions.