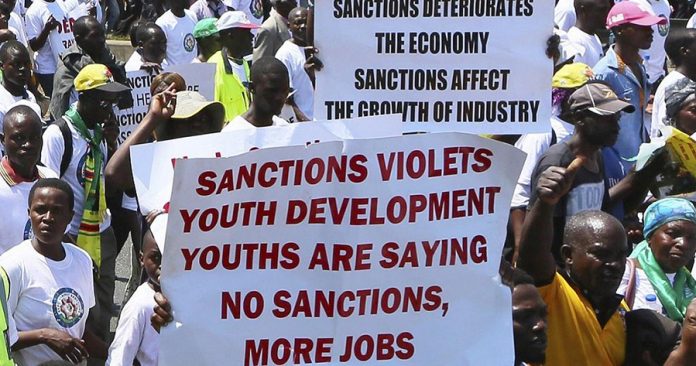 IT may have become common cause in recent weeks that Zimbabwe once again found itself as a target of severe criticism by the US over the emotive sanctions but the underlying causes of the imposition of the embargo remain unresolved and a serious threat to this country’s sovereignty and security.

This was ahead of the 33rd Ordinary Session of the African Union (AU) Heads of State and Government in Ethiopia last week as the US failed to resist the temptation to unleash its reckless foreign policy on Zimbabwe.

US Ambassador to Botswana Craig Lewis Cloud led an offensive that was meant to divide the Southern African Development Community (SADC) region ahead of the hugely successful AU meeting.

He tried to create the impression that Zimbabwe had ‘lost itself’ to corruption while carefully skirting the damage that his country’s sanctions have inflicted on Harare.

Uncle Sam was fully aware that the sanctions would be tabled during the AU meeting and that, as has always been the case, Africa would embrace Zimbabwe’s position and leave the US hanging precariously.

That is exactly what happened in Ethiopia where Africa formally joined the fight against the widely discredited embargo.

And the fight against sanctions goes on with the US, true to form, frantically cobbling another strategy to destabilise Zimbabwe.

They are anticipating an uprising against the Government but they will be left with egg on their faces.

In Zimbabwe, and outside its borders, American ambassadors have strict instructions to deny the existence of sanctions, instead claiming that they are ‘targeted’ against a few individuals within the ‘regime’.

But as empirical evidence has shown, sanctions are in fact against the whole country.

And it is, of course, ludicrous, to suggest that corruption is the cause of the country’s problems when the US makes it explicitly clear that their sanctions were in retaliation to the Land Reform and Resettlement Programme of 2000.

Their sanctions law, ZDERA, unwittingly admits that the sanctions will only be removed if Zimbabwe reverts to pre-1998 land tenure systems, where only a handful of whites owned and controlled well over 80 percent of the country’s prime land.

It is from this arrogance that Zimbabwe will not relent while the fight against the same has now caught the attention of sober minds like SADC and the AU.

This is why the presentation by President Emmerson Mnangagwa was crucial in so far as it mobilises both the SADC region and the AU into this relentless fight against imperialism.

At the AU Summit, President Mnangagwa emphasised on fairness as far as engagement and re-engagement processes are concerned.

Zimbabwe has met its end of the bargain through a raft of reforms that have been implemented since the new dispensation of November 2017.

“We would like to express our solidarity with the people and governments of Sudan, South Sudan, Somalia, Burundi and Cuba who are equally suffering from similar unilateral sanctions,” said President Mnangagwa.

“These imposed sanctions have been on for two decades now.

The EU has taken positive steps to repeal their sanctions regime.

We urge them to complete the process by removing the remaining measures against Zimbabwe.

My administration has engaged the EU and US with a view to normalise our bilateral relations and put the past behind us.

To enhance international peace and co-operation, dialogue, not sanctions, is the right approach.

In our quest to enhance national cohesion, unity and political tolerance, we have established the Political Actors Dialogue (POLAD) platform which brings together the various political actors in our country.

Meanwhile, our efforts to review the economy are ongoing and the ease of doing business has improved as acknowledged by the Global Index on Ease of Doing Business.

We have opened up media space to more players under the new dispensation.

Zimbabwe is therefore fully committed to continue those voluntary reforms because they are good for our people and further facilitate sustainable development, national unity and peace.”

Having successfully managed to lay the facts on the SADC and AU tables, it is now incumbent upon our leaders to take the sanctions fight to the UN.

Zimbabwe, or any other country for that matter, cannot continue to be bullied by countries like the US while the world watches.

The existence and reality of the sanctions cannot be ignored, especially through lies that have been parroted by media outlets roped in by Western countries.

What Zimbabwe needs now is a sustained campaign against the sanctions until those who sponsor them do the right thing.

Issues to do with corruption, as the US has been saying of late, are dealt with through Zimbabwean internal processes and institutions.

In the same vein, policies can only be said to have failed if and when their intended beneficiaries have said so but so far Zimbabweans have embraced those policies while contributing to the success of the country.