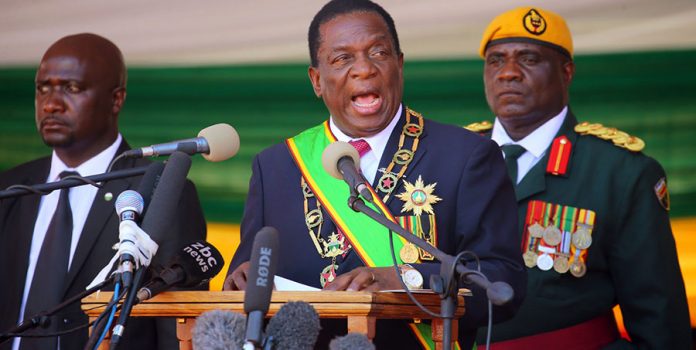 IN many places and many areas, Zimbabweans decided enough was enough.
Agitated by the ill-treatment they were receiving from the racist Rhodesian regime, they joined the great trek that would not only conceive but successfully give birth to the land we now proudly call Zimbabwe.
These young men and women were not insane.
They were driven by a desire to attain freedom; their desire was to achieve it for the people, for themselves too.
From far way lands, the sun bleached their skins, the rains pounded them with no mercy and there too was the cold.
Treacherous winds savaged them, casting away and aside all thoughts of going back home, with the fate of the country and its freedom in their hands.
Still they fought.
Still they gave their all, brushing aside all thoughts of fear and marching forward towards the Promised Land with hope, with zeal and expectation.
This is the country of our forefathers.
The country of the black people.
The country of dreams, hopes and promise.
Barefooted and barely fed, they marched on the land they so gave their hearts, minds, bodies and spirits to.
Mothers and fathers were crying back home; being harassed by the Rhodesian regime.
They were as sane as the various distinct groupings that we now see today; trying but with no success to dampen, to destroy and to lampoon the dream that we now call Zimbabwe.
“Kune nzira dzemasoja dzekuzvibata nadzo
Tererai mitemo yose nenzira dzakanaka
Bhadharai zvamunotenga nenzira dzakanaka
Dzorerai zvinhu zvose zvatorwa kumuvengi…”
Herein lies our tragedy.
In Zimbabwe we are dealing with an enemy who has yet to treat us with the respect we deserve.
In the West, we have an enemy who has failed, drastically, to come to terms with the compelling fact that Zimbabwe is not only an independent state, but a sovereign one which has as much right as any in the world to determine its course.
The aftermath of the disastrous August 16 2019 gave us eternally pervasive lessons on this so-called re-engagement thrust.
It gave a poignant and timely reminder that our development agenda is entirely and squarely in our hands.
That it is the mandate of every Zimbabwean, to play their role, their part in the development of the country.
We will not be cowed into submission by the so-called ‘human rights’ issues.
How many rights were being violated during those ill-fated demonstrations?
How many businesses were affected by those demonstrations?
How does the so-called democracy tally with wanton violation of innocent civilians’ rights?
How can it be called a prescription to our ills when it affects free flow of people’s movements; when it results in unprecedented violence and when it is aimed at destroying people’s property?
If this is what they do in the West — what they call free expression of so-called people’s rights — then here it is a different ball game altogether.
In Zimbabwe we respect the rights of every citizen.
We give honour and respect to everyone.
Before the security forces intervene, we all have that inborn, that inherent instinct that compels us to respect one another.
It is a cultural thing.
It is drawn from the perspective of common sense.
No amount of images from a regime change-trained lot can change that.
They will be arrested, those who try to destroy and tarnish the image of our country.
They will answer to the perpetual calling of the law, those who try to violate it.
You do not go about disturbing people’s peace and wave the democracy ticket.
Democracy has limits, so too does the so-called freedom of expression.
Western ambassadors, like Brian Nichols, Tim Olkkonen and their indefatigable lot, cannot tell us what to do here.
They cannot stand on the moral high ground and tell us how to run our country.
They should instead, and in fact, stand on the middle ground.
They too should understand that the freedoms, that the reforms that President Emmerson Mnangagwa is embarking on are not designed to please them and their Western counterparts.
It is being done for Zimbabweans and their future.
No amount of cajoling from the West can push us to implement those reforms within their prescribed time frames.
We will do those reforms at our own pace and in our own time.
In any case, we know that the West is falsely claiming that the reforms will unlock investment.
That is a lie.
What have they done for weeping Libyans after they murdered Muammar Gaddafi.
Their brand of democracy has left Libya in tatters.
Zimbabwe belongs to Zimbabweans.
Time and again this publication has said that re-engagement can only bring the results that we desire if and when we do that process on equal footing.
Conditions cannot be imposed by the likes of the IMF and the Western world when we have what they need and they have what we need.
This is our country.
They have their own countries.
The tragedy lies in the fact that they want to impose their will on us, to give us their own prescriptions which have failed to work elsewhere!
Those who are staging false abductions in the hope of attracting donor funding will soon have to dance to a certain song.
Forewarned is forearmed!
Let those with ears listen.