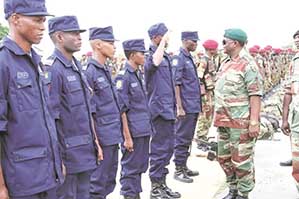 THE reason why there is a desperate bid to weaken Zimbabwe’s security sector by the West through their Peace Studies programme at the country’s universities is an admission by Washington and its British- led European Union (EU) allies that their protégé, the MDC-T and its leader Morgan Tsvangirai lack both the legitimacy and capacity to govern a country whose politics and collective psyche rests on the bedrock of anti- colonial war of liberation.
Their fears are well founded.
The current security service in its form is a hurdle to their achievement of effecting regime change in Zimbabwe.
On January 9 2002, just before the Presidential election, the then Commander of the Zimbabwe’s Defence Forces (ZDF) and himself a veteran of the war of liberation, the late General Vitalis Zvinavashe, made the following pronouncement on behalf of Zimbabwe’s security command:
“We wish to make it very clear to all Zimbabwean citizens that the security organisations will only stand in support of those political leaders that will pursue Zimbabwean virtues, traditions and beliefs for the thousands of lives lost in pursuit of Zimbabwe’s hard- won independence.
“We will not accept, let alone support or salute, anyone with a different agenda that threatens the very existence of our sovereignty, our country and our people.”
Significantly, Europe’s Council of Ministers protested, claiming that the statement amounted to ‘a threat to overturn the democratic process if military commanders did not agree with the result of the presidential election’.
So did the United States (US) government.
But the quick of Zimbabwean politics had registered.
To this war-derived command, the West and its pawns were shedding tears, protesting against the strength of demobilised veterans of our liberation war who showed the potency in Zimbabwe’s politics by leading in the campaign for land restitution.
In the same vein, the late General Zvinavashe’s pronouncement was of course an assertive stance on protecting the peasantry in the countryside who are part of the over 400 000 households that benefited from the Land Reform Programme and who have consistently given ZANU PF victory at the polls from Western interference.
This is why the West’s recent silence on the need to ‘reform’ Zimbabwe’s security sector is now manifesting itself as the Peace and Security Studies programme at the country’s universities.
There is a catch to that.
The ZDF consists largely of people who are products of the country’s war of liberation.
This is because, the majority who form part of this esteemed force, are drawn mainly from the grouping that waged a struggle for independence against the colonial regime in Zimbabwe.
Their ideological orientation is premised on defending the country and the gains made through the war of liberation.
In pursuit of ‘reforming’ or doing away with the current members of the security sector, the West through their sponsoring of the Peace and Security Studies programme have sought to rubbish efforts of the ZDF, instead choosing to enact the political aspect mischievously designed to associate them with ZANU PF.
But their exploits both in the country and beyond naturally diminish this aspersion.
According to the Ministry of Defence Website, the ZNA has played a significant role towards ensuring that peace and tranquility prevail in Mozambique during period 1983-1992 and in the Democratic Republic of Congo (DRC) under the Southern African Development Community Allied Forces from 1998 to 2002.
The DRC operation was code-named ‘Operation Sovereign Legitimacy’.
Pursuant to its external commitment, the ZNA participated in observer and peace-keeping missions in Angola, Rwanda, Somalia, Lesotho, Cote d’Ivoire, Liberia, Nepal, Burundi and Sudan.
Furthermore, the Army has taken part in flood and other natural disaster rescue related situations in Namibia, Zambia and Mozambique.
The roles of the ZNA include defending Zimbabwe’s territorial integrity, independence, sovereignty, socio-economic well being, vital interests and participation in peace-keeping operations.
The Air Wing of the Zimbabwe Defence Forces has played host to officers from the region for both its Junior and Senior Staff Training Programmes.
In June 2014, the Zimbabwe Defence Forces successfully co-hosted a riverine exercise code-named ‘Exercise Nyami-Nyami’ with Botswana and Zambia Defence Forces.
This year, the Zimbabwe Defence Forces provided security during the 2015 African Cup of Nations tournament held in Equatorial Guinea.
In a paper titled, Peacekeeping Contributor Profile: Zimbabwe, Gwinyai Dzinesa of Rhodes University highlights the many achievements of the ZDF including their acknowledgement of gender equality.
“Zimbabwe’s first UN deployment came in 1991 in the UN Verification Mission in Angola (UNAVEM II),” reads Dzinesa’s paper in part.
“The good performance of the Zimbabwean detachment earned the country credible reputation that led to further UN requests for its personnel.
“Since then, personnel from the country’s uniformed forces, including the Zimbabwe Defence Forces (ZDF), the Zimbabwe Republic Police (ZRP) and the Zimbabwe Prisons and Correctional Services (ZPS), have participated in UN missions including Angola, Côte d’Ivoire, East Timor, Eritrea, Kosovo, Liberia, Rwanda, Sierra Leone, Sudan and South Sudan.
“Significantly, women’s representation in Zimbabwe’s peacekeeping forces continues to increase.
“In 2011, 31 percent of the Zimbabweans in peacekeeping forces were women, and this increased to 42 percent in 2012.
“The Zimbabwe Republic Police (ZRP) was particularly close to the UN Department of Peacekeeping Operations (DPKO) target of 20 percent female representation; as of 2012, 18 percent of the peacekeepers from the police were women.
“As of December 2014, roughly 41 percent of Zimbabwean peacekeepers are female.”
Why such a force should be ‘reformed’ or ‘transformed’ is a mystery that even sponsors of this nefarious call are at pains to explain.