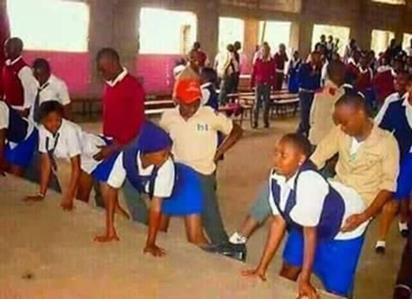 CULTURE, are the dos and don’ts of society.
When you strip a man or woman of his or her culture, you reduce him or her to the status of an animal.
Culture is the dignifying human factor.
It is what makes a people human.
The teachings left to us by our African ancestors are the sources of the dos and don’ts that make Africans human.
Grandparents are the vehicles that relay them to us.
And they speak from experience.
We despise them at our peril.
As African folk wisdom tells us, there is great difference between ignorance and illiteracy, and that some people, unable to go to school, are more educated and even more intelligent than college professors.
Folk wisdom therefore encourages us to listen carefully to what it calls mother wit because in those homely sayings is couched the collective wisdom of generations.
So when an African grandmother says to her granddaughter, “Keep your dress down and your underpants up,” she is not expressing her opinion, but conveying the collective wisdom garnered from generations of women’s experiences throughout the ages.
But non-governmental organisations (NGOs) and feminist activists come with their own contesting cultures from foreign lands and say, “Grandmother is violating her grand-daughters’ human rights.
“Let the girl-child be free to wear what she wants.”
And the courts agree.
Parliament also agrees.
They have taken over the upbringing of the African girl-child into their hands.
And the Constitution supports them saying, “Every person is free to follow the cultural life of their choice.”
So, the girl-child can ignore its parents’ culture and follow the teachings and cultures of strangers.
And the courts support her.
The courts are backed by the Constitution.
The Constitution is the supreme law of the land. Africans parents can do nothing about it.
Yet most of the values that are abominable to our culture find their way into our Constitution and country by people who have been educated in the ways of white people in schools and universities in Europe and also in Africa through the colonial school system which we continue to polish up and make it look like it’s a new thing yet there is nothing of our culture in it.
For instance, when African folk wisdom says, “There shall be no sex outside marriage, at any age, regardless of whether a person is a woman or a man, or married or not,” our schools, in defiance, go ahead and distribute condoms to African children in primary schools, suggesting that they can have sex, but be careful not to contract STDs, HIV and AIDS or become pregnant and end up in early marriages and disrupt their education.
This takeover of the role of African parental guidance by foreign organisations, cultures, and government education systems and institutions in Africa which follow European cultures, is what enraged Achebe when he said, an abominable religion has settled among us.
Our children are now taught to turn against their parents’ teachings like a hunter’s dog that goes mad and turns against its master.
And what is the result?
The African family falls apart.
And what is the fate of the children who disobey their parents’ and follow the teachings of foreigners?
Here is an example.
It is called The Chicken at Well.
“Don’t go near the well! Don’t play round it!” Mother Hen said to her children.
And they never came to the well.
But one day Mother Duck came and said, “Did your Mother say don’t go near the well? Why? I don’t stop my children from playing near the well. It’s a lot of fun! Your Mother is superstitious. She is living in the Dark Ages where they oppressed children.”
All the chickens listened quietly to Mother Duck speaking and said, “We hear what you say. But we follow the teachings of our own Mother.”
But one curious chicken tried to persuade others to go and play at the well.
But the others refused saying what their Mother tells them was wise.
The curious chicken ran alone to the well and stopped there.
“Why? The well is not so bad, he said to himself.
“I am here and everything is all right with me. Let me see what is in the well.”
And he went near and looked into the well.
And what did he see down there?
He saw another chicken!
The curious chicken turned his head.
The chicken in the well did the same.
The curious chicken jumped.
So did the chicken in the well.
The curious chicken became angry with the chicken in the well and decided to have a fight with him.
He jumped down into the well.
But there was no chicken to fight with, only water and water.
The curious chicken cried, “Help me, help me!” But nobody heard him.
He went down under the cold water.
Nobody saw him again.
As African folk wisdom says, “Experience costs too much when you get it from a trap.”
When we leave the future of our country into the hands of children who are free to practicse whatever culture they choose and listen to NGOs and feminist activists to scoff at African cultures, this country will surely be in ruins.
For, there is nothing that will stop them from taking it back to Rhodesia where it was colonised, kwayakanga yakasungirirwa.