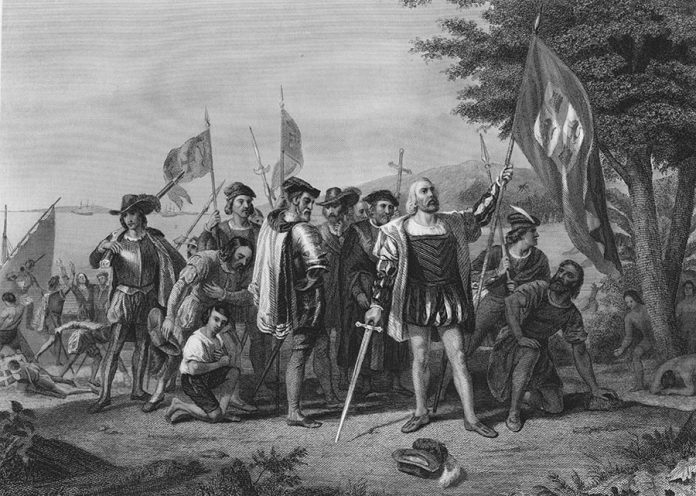 SLAVERY in Haiti started with the arrival of Christopher Columbus on the island in 1492.

Slaves in Haiti suffered the cruellest torture in the world.

The practice was devastating to the native population.

Following the indigenous Tainos’ near decimation from forced labour, disease and war, the Spanish, under advisement of the Catholic priest Bartolomeu de las Casas and with the blessing of the Catholic Church, began engaging in earnest, in the forced labour of enslaved Africans.

During the French colonial period, beginning in 1625, the economy of Haiti (then known as Saint-Domingue) was based on slavery, and the practice there was regarded as the most brutal in the world. The Haitian Revolution of 1804, the only successful slave revolt in human history, precipitated the end of slavery not only in Saint-Domingue, but in all French colonies.

The natives living on the island that would come to be called Hispaniola welcomed Christopher Columbus and his crew when they landed on the island in October 1492.

When Columbus arrived in 1492, slavery on the island turned into a major business; colonists quickly began establishing sugar plantations dependent on slave labour.

The practice of slavery in the Spanish New World colonies would become so large-scale in Spain’s colonisation of the Americas that imports of African slaves outnumbered Spanish immigration to the New World by the end of the 1500s.

The natives of the island of Hispaniola initially approached Columbus and his soldiers with friendliness and generosity.

When Columbus arrived in what is today Haiti, in December 1492, and met the native Taino Arawak people, they were friendly, exchanging gifts with the Spaniards and volunteering their help.

But Columbus was already planning to enslave them. He wrote in a letter to Queen Isabella of Spain that the natives were “…tractable, and easily led; they could be made to grow crops and build cities.”

When Columbus returned to Europe in 1493, 30 of his soldiers stayed behind to build a fort there called La Navidad.

They began stealing from, raping and enslaving, the natives—in some cases they held native women and girls as sex slaves.

Finding gold was a chief goal for the Spanish; they quickly forced enslaved natives to work in gold mines, which took a heavy toll on their health.

In addition to gold, the slaves mined copper and grew crops for the Spaniards.

In response to the brutality, the natives fought back.

Some Taino escaped into remote parts of the island’s mountains and formed communities in hiding as ‘maroons’, who organised attacks against Spaniards’ settlements.

The Spanish responded to the native resistance with severe reprisals, for example destroying crops to starve them.

The Spaniards brought, to the island, dogs trained to kill the natives and unleashed them upon those who rebelled against enslavement.

In 1495, Columbus sent 500 captured natives back to Spain as slaves, but 200 did not survive the voyage, and the others died shortly afterwards.

In the late 1490s, he planned to send 4 000 slaves back to Spain each year, but this expectation failed to take into account the rapid decline the native population would soon suffer and was never achieved.

It is not known how many Taino people were on the island prior to Columbus’s arrival – estimates range from several thousands to eight million – but overwork in slavery and diseases introduced by the Europeans quickly killed a large part of the population.

Between 1492 and 1494, one third of the native population on the island had died.

Two million had been killed within

10 years of the Spaniards’ arrival and by 1514, 92 percent of the native population of the island had died from enslavement and European diseases.

By the 1540s, the culture of the natives had disappeared from the island and by 1548, the native population was under 500. The rapid rate at which the native slaves died necessitated the import of Africans, for whom contact with Europeans was not new and who therefore had already developed some immunity to European diseases.

Columbus’s son, Diego Columbus, started the African slave trade to the island in 1505.

Some newly arrived slaves from Africa and neighbouring islands were able to escape and join maroon communities in the mountains.

In 1519 Africans and native Americans joined forces to start a slave rebellion that turned into a protracted uprising.

Rebellion began to be preached by the leaders of the indigenes. For instance, Taino cacique (tribal chief) began speaking up against slavery, “…they tell us, these tyrants, that they adore a God of peace and equality, and yet they usurp our land and make us their slaves. They speak to us of an immortal soul and of their eternal rewards and punishments, and yet they rob our belongings, seduce our women, violate our daughters.”

And so began the resistance to slavery in Haiti.